This past Saturday saw the loss of one of humanity's greatest lights with the passing of Nobel Peace laureate Elie Wiesel. We were both privileged to know him and share a public stage with him on many occasions and feel compelled to highlight that his message is especially relevant in today's turbulent environment.

Our world, increasingly darkened by violence, terrorism, bigotry, and prejudice, must reaffirm the values for which he stood and the principles to which he devoted his life.

We are two friends who come from different faith traditions and both salute the universalism of Elie's call to the world to live by urgent and essential values. 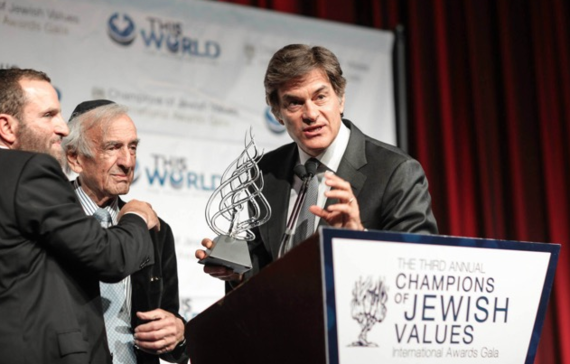 Elie Wiesel was robbed of his parents and sister by the Nazi holocaust. In lending eternity to the memory of its six million victims, he affirmed the infinite value of every human life against radical ideological movements committed to the destruction of those labeled strangers and inferior.

While following in his footsteps, humanity must condemn and oppose all groups who demonize others or deny that we are all equally God's children. Violence in the name of God is the first religious abomination. Killing in the name of God is what most kills love and respect for God. What unites us all is a common father in heaven. What parent could possibly want his children to slaughter each other?

But in opposing those who would murder to advance their creed, we must never ourselves be guilty of collective punishment. America is a country that has a specific God but no specific religion. It has always welcomed people of every faith and no faith.

Calls to ban Muslims not only don't make us safer but present an immediate danger to our values which is the essence of what really protect us. This is the irony of divisive politics that Elie exposed. They are a distraction from the real challenges our society faces and exploits a population's fear rather than its promise. He would caution us to stop offering incorrect promises to a panicked people grasping at any opportunity to control their destiny at the expense of others.

At the opening of the U.S. Holocaust Museum in Washington, DC, in 1993, Elie thundered about the indiscriminate murder by the Nazis and how the world did nothing to save his people. Then he turned to President Clinton and demanded that he stop the ethnic cleansing in Bosnia, although most of whose victims were Muslims.

He spoke just as forcefully against the genocide in Sudan and South African apartheid as he did against the Soviet oppression of Jews,. And when Elie Wiesel spoke, the world paid attention.

To Elie every life was valuable, and every individual endowed with infinite worth. He enjoined us to speak out on behalf of the world's victims and to hold those in power accountable for mass atrocities that go unaddressed. Where others saw difference he saw humanity's common thread. Where others sowed division he orchestrated disparate parts into a more beautiful whole. He saw in every stranger an equal spark of the divine as he personified the Biblical imperative of loving our fellow man as ourselves.

For Elie, human evil festered in a climate of forgetfulness. Too often humanity overlooked its oneness. For Elie remembering was the key. "In the end, it is all about memory, its sources and its magnitude, and, of course, its consequences." Elie was a haunting figure who reminded us through brutally honest prose that we can never forget the core values of our civilization.

At an intimate dinner we shared with our wives several years ago, Elie shared that he refused to initially write his groundbreaking book "Night" because the honesty required was too painful. Elie's wife Marion shared that it took him a decade to craft the haunting memoir. He recalled watching his mother Sarah and younger sister Tzipora led to their slaughter in Auschwitz by "The Angel of Death" Josef Mengele. He and his father Shlomo were later herded to Buchenwald, another Nazi death camp, where his father succumbed to dysentery.

With searing honesty Elie recalled being too numb -- physically and emotionally -- to respond to his dying father's pleas for water. "I had no more tears," he wrote, when the pleas stopped the following morning. How many of us could have processed such pain, even a decade later?

The honesty was too much for the world in the mid 1950s and the first edition sold only 1000 copies. But by the time we grew up, "Night" had become required reading for students across America, perhaps because so many felt guilty for silently allowing the holocaust to transpire. Elie suffered through the experience and embraced the angst because he felt that too many of us have had our voices silenced. He prayed for the opportunity to share traditional values with the children of the world in hope that they would gain the love and light needed to joyfully and bravely tackle the many challenges our world presents. He lifted people to thinking higher and feeling deeper.

Elie advocated an enduring memory of the unthinkable as he offered testimony to the unspeakable. A gentle voice against all inhumanity, Elie devoted his life to confronting evil wherever it surfaced.

Awarding him the Nobel Peace Prize in 1986, the Nobel Committee called Elie Wiesel a "messenger to mankind." In his acceptance speech, he said: "I swore never to be silent whenever and wherever human beings endure suffering and humiliation. We must take sides. Neutrality helps the oppressor, never the victim. Silence encourages the tormentor, never the tormented. ... Human suffering anywhere concerns men and women everywhere."

For Elie, the innocent bystander was never innocent. The complacent witness was already guilty. The opposite of love is not hate, he said, but indifference. Let us never be silent when any of God's children are persecuted. Let us always remember that "every moment is a moment of grace, every hour an offering; not to share them would mean to betray them. Our lives no longer belong to us alone; they belong to all those who need us desperately."