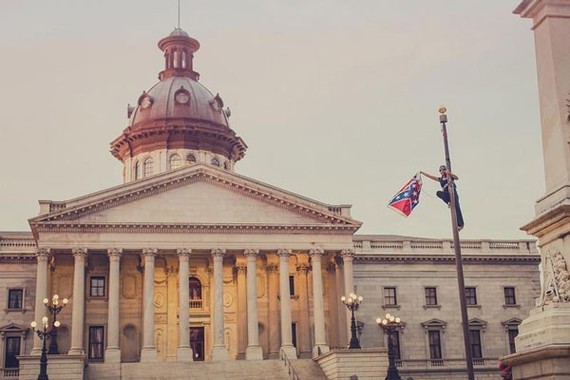 Around 1 a.m. on June 27th, 2015, Bree Newsome and I drove down to Columbia, South Carolina. Several hours later, we met a group of 12 activists at a Waffle House, across the street from the South Carolina Capitol grounds, where the confederate flag silently flew. Every person present knew their specific roles, and by the time the sun rose, Bree had removed the Confederate flag from its pole. Shortly after, Bree and I were taken into custody by capitol police, a video of the action went viral, and the rest was history.

Our action was a direct response to the June 17th massacre at Emanuel AME Church that left 9 parishioners dead. We were tired of the redundant narrative of thinly veiled racism and falsely justified cultural relevance associated with the confederate flag. We planned and structured the action intentionally to have a woman of color, assisted by a white man, climb the pole and remove this particular symbol of intolerance and hate. Taking down the flag was our collective statement, shouting load and clear, "No! This flag does not have legitimacy here. It is not our flag, it does not fly for us, and we will not stand idly by debating the validity of its symbolism. Period."

When I first began writing this blog post, I found myself telling the story of the action, a compelling story I've told to the media time and time again. Upon reflection, I decided I didn't want to write that story. Instead, I think people should know what motivated a person like me to assist in removing the confederate flag. Why would a white person participate in an action seeking to dismantle a historic symbol of racism, particularly when that racist system benefits that individual.

The reasons that I participated are complex and distinct from the reasons of my comrades of color. Let me state clearly that I know that I am a privileged white male from an upper middle class family. I could utilize my unearned privilege for the rest of my life without caring one way or another about the confederate flag, or about racism. For that matter, I am on the winning end of every inequality we so thoughtlessly perpetuate in our culture.

So, what motivated me? To answer that, I need to dig a little deeper into some theory and personal history.

Over the last five and a half years I have been heavily involved in the activist community, organizing around environmental issues, such as coal, fracking, and climate. Early on in my activism, I had my mind blown on several occasions by anti-oppression trainings, completely shifting my relationship to others. From the lens of privilege and oppression, I now more clearly see the interconnections between the environmental destruction and the oppressions of minority and indigenous groups by the dominant class. From colonialism, global capitalism is born, with both having the same end goal of dominance and ownership. Like colonialism, capitalism is propped up by the twin pillars of exploitation and extraction, exploitation of others, and extraction of resources from lands occupied by others. Without these twin pillars, profitability would never be an option within the global capitalist system. In the same way that capitalism needs constant resource inputs to feed its rampant consumption, capitalism also need hegemonic justifications for poverty, cultural bias, oppression, and exploitation of peoples.

Making a stand against environmental destruction or racism are similar fights with the same common enemy, an enemy that has found a home within us all, as consumers and participants in the world as we know it. However, we should know that the world as we know it is not all that is possible. I wholeheartedly believe that we should be actively creating the world we want, rather than resigning ourselves to the world that was given to us, particularly considering that none of us were asked for our consent upon entering said world. Ideally, we should only be giving our consent to the aspects of the world that we wish to perpetuate. Racism, inequality, privilege, and oppression are all examples of structures I have no interest in perpetuating.

Several days before taking down the flag, I was still wrestling with the dangers and ramifications associated with my role in the pending action. I talked to my father loosely about our plan and my reservations, and he said something that resounded with me. He said, "Jimmy, if you do this, you'll be putting yourself in harms way for some time now." What he meant was that I would be making myself a target for racist retaliation. Embarrassingly, my home state of North Carolina has ten active KKK chapters.

I realized that my participate in the action would suspend the protections awarded by my white skin. I would be making myself a target for the same type of terror and violence that has been perpetuated against people of color since the birth of this nation. It was at this moment that I realized there was no way for me to turn away from the action. I was sick of my own silence, of my complacency to inhumane cultural norms, and of having redundant conversations that left us all exactly where we had began.

To stay passively silent in the face of injustice is the same as actively taking the side of the oppressor. This silence has been the primary method that racism has perpetuated itself. While black America bears the mental and physical scars of racism, white America bears the guilt of perpetuating racism through ouR silence. My participation would perhaps be the first time that I intentionally broke my own white silence.

As white Americans, we have been perpetuating racism since racism was designed. We feign ignorance, play the color blind card, shift responsibility, point out black friends, or beseech people of color with placations to our good white intentions. But these placations are disingenuous, pretending a world where we are all equal, with similar opportunities, and interchangeable cultural experiences. The irony here is that the privilege of staying silent or ignoring the ever present truth of systemic or blatant racism is a privilege that is only possible through the oppression of others. A white persons choice to care or not care about racism is a privilege that is afforded only to white people, specifically because of racism.

Therefore, the responsibility of dismantling racism and privilege falls overwhelming on the group of peoples benefiting from the system of racism and privilege. Yes, I am talking about white people. People of color in the United States do not have the option of ignoring racism. Conscientious white people should be actively dismantling the system we created and from which we are currently benefiting. As white people, we should realize that with great opportunity comes great responsibility. My family and surrounding environment taught me that the true measure of a societies greatness is calculated by how it cares for its most disadvantaged peoples, not by how lavishly it pampers its most privileged classes.

As a white man, I can choose to care about the confederate flag or not, but my individual interpretation is less important than how two other groups of people view the flag. For the Dylan Roof's of the world, the flag has a specific meaning, tied to hate, violence, and racism. I have heard many people of color describe the flag as a sign of poignant intolerance, of feeling unwelcome in the place they find themselves. For these two groups of people, the flags meaning is specific and grounded in a lived experience, not a relative conjecture of values and heritage.

I believe dismantling racism to be the responsibility of all white people. To clean our hands from that task requires us first to get those hands dirty, actively tackling the sins of our forefathers. We should view the dismantling of racism as a healing process. The individual mindset accustomed to privilege is a sick mind, consumed by delusions of grandeur. The collective lineage of inequality has poisoned our entire culture with its inhumanity. As a white person, I know now how much work we have to do. The task at hand is huge and charts the course of history, but dismantling racism is necessary for healing, and only through healing will we ever regain our humanity. 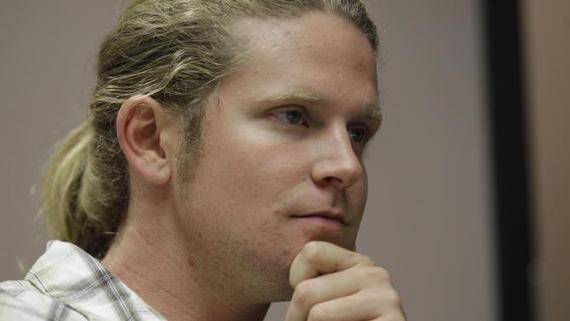 -"Jimmy" James Tyson was born in Charlotte, North Carolina, and received his Bachelors of Science in Environmental Science from Warren Wilson College. Most of his time is spent at home on the farm, milling wood, tending to horses or chickens, and managing day-to-day operations. On June 27th of 2015, he assisted Bree Newsome in removing the confederate flag from the South Carolina State Capitol.