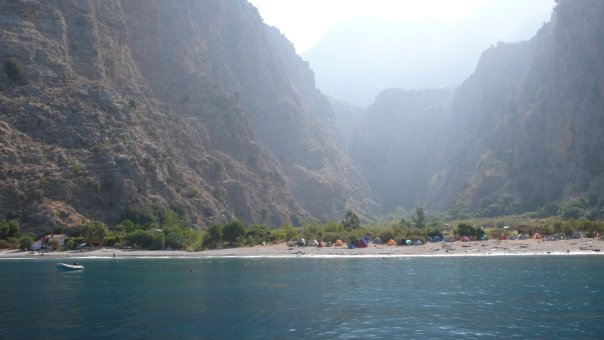 The pier was long and it was past 9pm. Lights were still on at various restaurants nestled against the waterfront and among bazaar booths. A thick bald man was sleeping on the deck. A stocky woman with a mess of curly hair, more peppered than salted, welcomed us to what was to be our home for the next 5 nights. Her English was very limited (as was her husband's, the Captain; the best English-speaking person on the ship would turn out to be their 11 year old daughter, Sarah). Travelling with me was Colin, a good friend and adventure-hunter. The boat cruise in Southern Turkey was his idea. Though affordable, we were both skeptical about what we were getting ourselves into. (After our return he confessed, "That really could have turned out horribly, I had no idea what to expect.") We'd had no referrals, no promises as to the cleanliness of the ship, the food OR our travel companions. Luckily for us, the trip was blissful, sun-filled and exactly what the doctor ordered.

We set off early the next day. The waters were of a color I've never seen. The aquas and blue-greens so clear that they seem to belong more on a movie set, died-to-match, than occurring naturally. The plan was to hit an island or so a day, dropping anchor early evening. Sometimes little Sarah swam to shore to tie us to large rocks just beyond the water. Island visits were more drive-bys than actual de-boating as some of the shores were protected, others were privately owned and the rest were pretty to look at but offered no paths to walk on. The Med, though beautiful and clear, was almost too warm to be a refreshing respite from the heat. That the salt kept you floating without the need to so much as flap an arm or kick your legs made it a place too easy to spend a few hours lazing in the sun.

The boat was a haven for laziness and relaxation. Each day blended into the next. No phones or clocks to tell the time, we awoke when the heat started to make us sweat and slept when we'd had enough (or too much) to drink. We became the sort of people who felt we could tell the time by the sun but who also knew we didn't need to know what time it was at all. When Babushka rang the bell for tea, we would know it was mid-afternoon and that dinner would be ready in a couple hours.

At every island we'd see a few other boats like ours dropping anchor. Sarah would be sent swimming to shore to tie the boat to boulder. Between us, vendors in rowboats would sidle up, advertising crepes or ice cream bars. Captain and the vendors greeted each other warmly. Goods were traded (some flour from the crepe-maker for some fish or eggs on board). Crepes were made from a stiff dough that the cook, a small woman with leathery skin and a bright smile wearing a tangerine headscarf, pounded endlessly with her fist. A rolling pin was use to make it impossibly thin and sweet or savory items were tucked inside for around seven US dollars. You could tell by the hushed, intimate conversations between the Crepe couple and Captain and Babushka that this boating community was tight knit. These were some of their best friends. But what of Sarah? There weren't that many other children on the neighboring boats. We all took a liking to her and would teach her how to play the games people had brought on board. She was smart and caught on quickly. She was probably born on that boat (or close to it) and it seemed that she wouldn't soon leave, either. Children in rural areas of Turkey are home-schooled, if they're schooled at all. She was trained to follow in her parent's footsteps. I'd hoped that every group the Captain took out paid as much attention to her as we did but I could tell by how tightly she hugged me, and the tears that followed when I left, that we were one of the few groups she'd consider calling her friends. She had a simple life on that boat and I couldn't help but wonder how we complicated it.

Efes, the one word we'd say that the Captain always understood crystal clear, is Turkey's national beer. It was consumed in abundance over board games and cards at night. After dinner, we'd take a dip and swish our hands around and watch the bioluminescence. Captain would strap on a headlamp, grab his spear gun and flippers and hop overboard. Watching the light scan back and forth as he swam in wide circles, he'd re-appear half and hour later with some barracuda in a bag which was thrown in the cooler for lunch or dinner the next day. Babushka always made salads and pasta with the fish. It was simple, every day a variation on a theme, but always incredibly delicious. I wished I'd watched her cook some to see what magic she worked on her salad dressing and exactly how she cooked her green beans. The only thing I was sure of was that the fish were grilled plain. Colin and I would watch Captain turn them once while we took our tea and cookies. 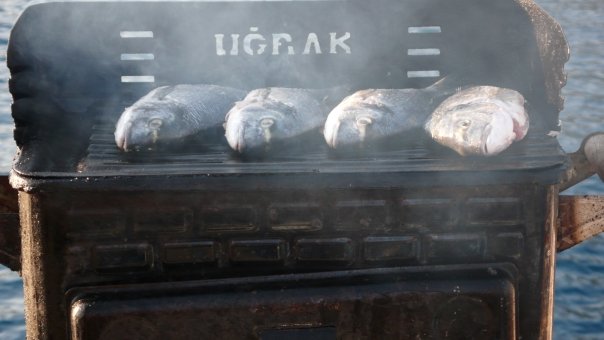 The day before our last, we sailed by Oludeniz, known in travel magazines as one of the most beautiful beaches in the world. Deep blue waters and perfect white sand, it was forbidden territory, national nature reserve, and our boat was too large to breach the mouth of the lagoon. Our need to leave the boat for land was met, however, with Butterfly Valley. A lone dinghy with a gorgeous white flag bearing teal butterfly suggested both a place to surrender and a place of beauty. The flag did not lie. We saw a dozen brightly colored tents set up on shore and a wooden arch to the left of the beach, welcoming us. As we swam closer to shore, bongo drums could be heard. Once through the arch the drums became louder, joined by the jingling of a tambourine tapped softly and the sway of Bob Marley and Jack Johnson. A wood shack posing as a bar had beer on tap. We all realized that we weren't prepared for this oasis. Nobody had brought cash. Our strongest swimmers were volunteered to head back towards the boat to pick up money. I agonized about whether I trusted my expensive camera in a zip lock bag and, however badly I wanted to document this place, it wasn't worth the price of a new camera. Common sense won out in the end. Barely. When the money-fetchers returned, the cash was wet and had to be peeled off in delicate layers but the bar was prepared; above the register were miniature clotheslines and clothespins and dollars were promptly hung with care to dry. We camped out at a few shady picnic tables underneath a canopied trellis of vines and flowers, admiring the homemade quality of the place. Twee hand painted signs gave directions to cabins, rules to abide by ("Be Happy") and designating the hammock spot from the fire pit. The smell of pot wafted through the air. Dreadlocks were in abundance. A girl braided and beaded hair off to the side of the bar.

I couldn't sensibly claim sadness when leaving the carefree valley to return to our also carefree boat, but I dreaded our trip back to land. Back to a life where you not only had and used watches but one where cell phones buzzed, cars honked, people pushed past you on the street, which meant also having to wear shoes and, while we're at it, clothes. It all seemed horribly wrong and inconvenient. As we docked we were the ones who looked like fools to be joining the world of solid ground. Little Sarah might have it better than she realizes. 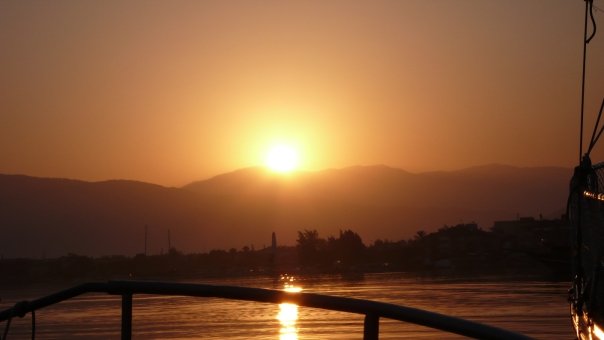