A Louisiana cajun restaurant thinks your smoked ribs and fried catfish would go better with a side of firearms.

Bergeron's Restaurant in Port Allen, Louisiana, is giving gun-toting customers a 10 percent discount on their meal after a series of national chains have banned guns in recent months.

"There are people here with guns, this is not a gun-free zone," Kevin Cox, the owner of Bergeron's, told The Huffington Post in a phone call. "So if you want to cause trouble, you can think about who you're sitting next to."

Cox told HuffPost that the deal was originally designed to encourage law enforcement officers to visit the Cajun restaurant, but was then broadened to welcome all gun carriers.

"It makes us all feel better when state patrol, police and sheriff's department come in and have lunch here because you know when they're here we're safe," Cox said. "And I realized that we have a lot of good people that carry a firearm in Louisiana -- my cousins and relatives included -- and I'm equally as safe when they're here, and I need to encourage that."

Advocates for open-carry gun policies have recently forced some chain restaurants and retailers to clarify their policies on guns. Chipotle and Target adopted no-gun policies after gun rights activists flaunted their weapons in the stores. 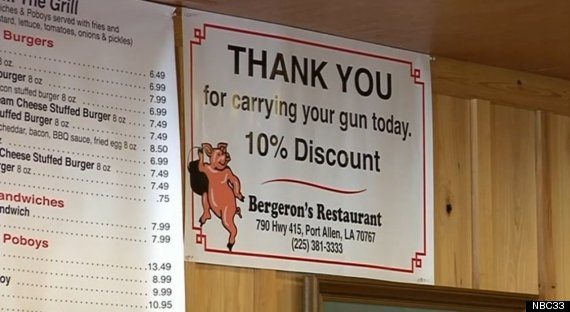 It is legal to openly carry firearms in Louisiana without a permit, as long as you're over 18 years old and not prohibited from having a firearm under federal or state law.

Cox told NBC33, an NBC affiliate in Baton Rouge, that he's been giving out 15 or 20 of the discounts each day.

He said "business is taking off" since the deal was introduced and reported by media outlets, and customers are driving from all over the region to show their support for the restaurant.

The gun discount may or may not leave a bad taste in your mouth, but
at least the Bergeron's BBQ is consistently tasty.