Mike Sanson is the chief editor of Restaurant Hospitality magazine, a national trade pub that covers the full-service restaurant industry. In every issue he tweaks his readers into passionate responses, often by retelling his own dining experiences. The issues he confronts them with are of vital interest to restaurant owners, but they are also the kind of topics that will raise the hackles of folks who dine out often. In addition to showcasing his columns from the magazine, we're also sharing some of the responses he got from readers of RH. Many of these responses shine a light on what goes on behind the kitchen doors. So, as a customer of these restaurants Sanson writes about, what are your thoughts? What really bugs you when you eat out?

Here's a nasty problem that bit me in the butt again recently. I'm talking about a situation that I'm sure most customers would put at the top of a list of things that make them think twice about ever returning. How restaurants react behind the scenes and out front makes all the difference.

Here's the scenario: I was out to dinner with seven other friends at one of the better, upscale restaurants in town. An eight-top can be unwieldy, but our server was confident and sharp. Drink orders were taken and drinks were properly delivered. Several appetizers for the table were ordered, arrived promptly, and passed. But here's where the problem occurred. Later, our entrée orders were delivered and placed in front of the proper people... except one.

There we were, seven of us with our entrees placed before us and the eighth person in our group was left hanging. What happened to the eighth entrée? Our server was so on top of her game, I believe the kitchen dropped the ball. But it doesn't matter who messed up. 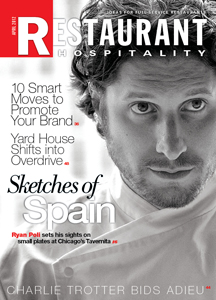 What matters is how you handle this scenario, because now everybody at the table is uncomfortable. Will the eighth dish arrive in a minute? Was it ever fired? Those are the questions customers ask as the server scrambles to find answers. Those (customers) with manners won't eat until everyone has their food. The one without food doesn't want the others waiting while their food gets cold. In essence, everyone at the table has just been put in a no-win, stalemate situation. The solution is simple, in my opinion, but so many restaurants blow it.

When a mistake like this happen, restaurants should have a go-to menu item (soup, a salad, an appetizer) ready to be delivered immediately. Once that item is placed in front of the customer, others at the table have been set free to eat without guilt. But that's not what happened during this most recent incident. A mistake was made and the eighth diner's food was never fired. And the restaurant never had a Plan B food item at the ready to save the day.

But that's not all! The manager, following some weird concept of damage control, came over to the table and blamed the server for the mistake. What? Now, all of a sudden, we've been put in another uncomfortable position because our server has been thrown under the bus. I'm sure they don't teach this tactic at Harvard Business School. Customers don't give a damn whose fault it is. They want to be released from the awful situation they've been put in. Fix it! Don't blame someone.

Inevitably, when a restaurant blows it this badly, the people with food eat and try to share some of their meal with the lone soul. By the time we were done eating, the eighth dish arrived horribly overdue. Now the eighth person was eating uncomfortably alone while the seven others tried their best to make the person feel okay. This is all so unnecessary.

Your column caught my attention as I was dealing with the same scenario just a few days ahead of your article. It was a six-top for lunch and the sixth entrée was never fired. It was the kitchen's mistake, but it happens. Immediately my server delivered a soup du jour to the sixth person, and the guest seemed happy that she took the initiative. I followed shortly after and apologized for the inconvenience and assured the table that the sixth entrée would be served in minutes, as well as desserts for the whole table on the house. That was the moment where all the negative, uncomfortable feelings were forgotten and bright smiles and cheers came out! I created a simple chocolate ice cream, whipping cream and raspberry sauce dessert with
fresh strawberry for the table and made it a lunch to remember.
Daniel Mrkic
Restaurant Manager
Hilton St. Louis Frontenac
St. Louis

Send out a simple Plan B cup of chowder or French onion soup, and wrap a to-go salad, a slice of prime rib, a potato and a veggie and comp the substitute charge for the dinner. If the customer is staying in a hotel just comp it. Mistakes happen. It's all in how you compensate for it. There's no time for blame. The time to strike is when the iron is hot and the customer is hungry.
James Quirk
Owner
New England Steak and Seafood
Mendon MA

Unfortunately, these things do happen. The manager should find out what had happened, then apologize to the party and the guest. Be honest and explain to them that a mistake was made and that the order is being prepared as we speak. Bring the guest a soup or salad, so he or she won't be left out.
Francis Liong
Owner
Lamb's Grill
Salt Lake City

Ultimately it doesn't matter who gets the blame. The mistake and how we respond reflect on the restaurant. The guest doesn't want to see professionals behave that way (blaming each other). As the chef at a sports bar, I have several at-the-ready items that I can produce at a moment's notice. I do just what you suggest in the article: send out a "Plan B soup, chili or bruschetta." This almost always eases any tension. The most important thing is to make sure the guest is happy with his or her experience. I also send a dessert to the table, and if they don't want it for dine in, I send it home with them to go.
Scott Phillips
Executive Chef
Crabtree Tavern
Raleigh, NC