No refuge could save the hireling and slave/ From the terror of flight or the gloom of the grave.

The third verse of the Star Spangled Banner, which curses escaped slaves to the grave for joining with the British, is going from obscure to infamous, thanks in part to Jon Schwarz's article on The Intercept about Colin Kaepernick and his refusal to stand for the national anthem. Jason Johnson's July 4th article on the anthem, on The Root, "Star-Spangled Bigotry: The Hidden Racist History of the National Anthem", has also started to go viral since Colin took his seat.

Now people are talking about getting rid of the anthem, or at least no longer standing for it. I'll give some reasons for why we might want instead to expunge the third verse and replace it with something authentic and better.

Critics have zeroed in on the fifth and sixth lines of this verse, quoted above: "No refuge could save the hireling and slave/ From the terror of flight or the gloom of the grave." Even though one history website claims that the verse refers to the impressment of captured American sailors, it's impossible to imagine that Key would wish death upon Americans forced to serve on British naval ships. There seems to be little doubt that the reference is to the Colonial Marines, a battalion composed of slaves who had escaped to the British and volunteered to fight with them as equals, and thus to fight for freedom.

Advertisement
Companies from this battalion had participated when British troops vandalized the city of Washington and burned the White House in August 1814, just a few weeks before the attack on Ft. McHenry that found Frances Scott Key witnessing the battle from behind British lines. It must have been the ultimate perversion, in Key's mind, that runaway Negro slaves from the Colonial Marines, traitors who
had not earned their freedom
, would fight with the British to take away his and his country's very well-deserved freedom. As a lieutenant, he had already faced the British battalion that included these men in their march toward Washington. He, along with his entire unit, had been routed. For Key to find himself aboard a British ship during another attack must have been agony. 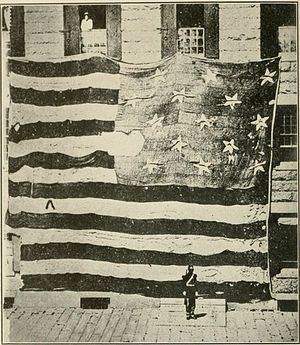 There's another line in the same verse that tells how very deep Key's agony and antipathy ran, a line not highlighted in the media I've looked at so far. The verse begins with a description of "that band who so vauntingly swore" to destroy the nation and goes on to celebrate that "their blood has wash'd out their foul footsteps' pollution." Everyone seems to think that this refers to the British, but it's hard to imagine that "their foul footsteps' pollution" refers to the British generals with whom he was
amiably negotiating
aboard the HMS Tonnant just before the battle.

I wonder instead if Key was reliving his memory of the Colonial Marines penetrating Washington. (I am using this sexualized language to try to imagine how Key would have thought about it.) What makes me think so? "Pollution" is a religious term that fits with other religious language Key uses. In religion, it refers specifically to what happens when an unholy/impure/forbidden thing is brought into a holy space such as a temple. The concept of pollution is often pressed into service to support the worst kind of racism – here it perfectly describes what it would mean to a slaveowner to see armed Black men, men who grabbed their freedom for themselves, marching on the White House to burn it. And just as pollution in most cultic religions is washed away by the blood of a sacrificial animal, so here in Key's perverse verse, the blood of Black men would "wash away their pollution".

The Battle of Ft. McHenry was part of a combined land and sea assault on Baltimore. The day before the attack, the Colonial Marines had participated in the assault's first phase, the Battle of North Point. Things didn't go as the British had hoped. Once the naval attack failed, the second day of the land assault was called off, and the Colonial Marines, along with the rest of the British forces, decamped. The total dead among the British was small from a modern perspective, less than 50 (the number of wounded was about 300), and only a handful of Colonial Marines died in the battle. But their blood and their defeat was enough to satisfy Key.

Remarkably, this is not the first time people have cried out against the third verse, but not for the reason you might think. In 1905, a magazine called Every where printed an op-ed that said, "these lines, as is well known, referred when written to the British army...but it seems a little bloodthirsty to still be wiping out their foul footsteps' pollution, after being at peace with England...ninety years or so". By then, the memory of the Colonial Marines and the original context of the verse had been totally forgotten.

Even more remarkably, a new verse for the Star-Spangled Banner was written in 1861 by Oliver Wendell Holmes Sr. (father of the famous jurist), who hailed from Boston, a center of the abolitionist movement. It goes in part: "When our land is illumined with Liberty's smile,/...By the millions unchained who our birthright have gained/ We will keep her bright blazon forever unstained!" Written in 1861, at the beginning of the Civil War, Holmes's verse was a clarion call to wage war against the Confederacy, which he called "a foe from within...the traitor that dares to defile/ the flag...".

If you haven't heard of his verse, it's not because it immediately dropped from view. In fact, it was widely published alongside the original verses, including the third verse, in songbooks of the era. So even abolitionists, less than 50 years after Key wrote the song, did not realize that the third verse was about slavery. 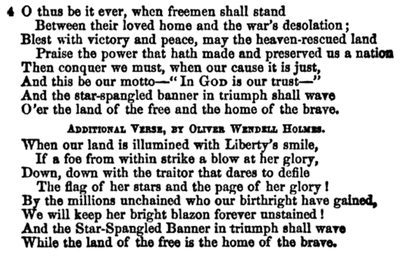 Holmes's words looked prophetically toward a future when millions of slaves would be freed and able to exercise the birthright and freedom that should come to everyone born in the United States. Holmes, like Key, was also concerned about pollution, about what "defiles" and "stains", but for him the pollution was the institution of slavery itself. What is so painful is that a century and a half after the Civil War, we are still suspended between Key's verse against the slaves and Holmes's verse against slavery.

In "Star-Spangled Bigotry", Johnson links to a moving video about the anthem that was created by students at Morgan State University, the historically black college in Baltimore, and uploaded in May. These students did an extraordinary service to their country. Their video concludes at 12:00 with a black choir singing Key's horrific third verse in fullest harmony, while images of modern American racism flash across the screen. The serendipity that enabled their video, and the sources that draw on it, to be in place just in time for Kaepernick's act of refusal is probably thanks to the Black Lives Matter movement. But whatever the reason, it is a moment of grace, and we should seize it.

Even with so many important issues pressing upon us, it's clear that we really do need to change our anthem. But getting rid of the Star Spangled Banner seems unlikely. What if an act of Congress were to swap out the third verse with an updated version of Holmes's abolitionist verse? Officially adding this verse – and singing it – would acknowledge that we are still struggling mightily to become a home of the free, and it would look forward to a time when the country will be "illumined with Liberty's smile". Making the change won't free anyone, of course, but it would give official, national recognition to the fact that we not only have a long way to go, but that we are determined to get going, not just as a protest movement, but as a nation.