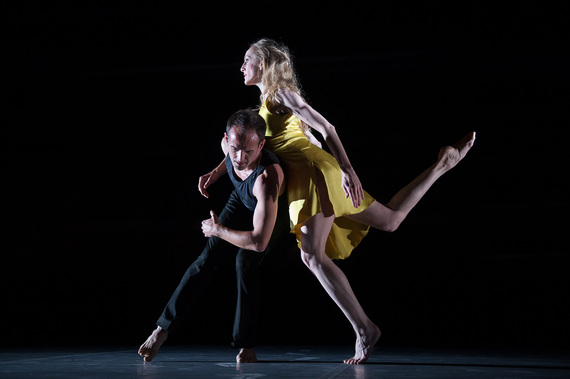 It was a lazy Saturday afternoon in Chelsea. Wanderers traipsed across the High Line, stealing light from the sun and embracing summer with selfies and gelato. Underneath them and a few streets east, crowds ventured into the Joyce, the heat outside prompting a soft malaise among them. But as the clock struck two and the theater dimmed, excitement wafted from seat to seat -- excitement that's absent in strawberries or strolls, picnics or the pool. There was a feeling that escaped season and even time: Wendy Whelan was about to emerge from a curtain, and hearts beat loud, waiting for brilliance.

With icon status come expectations. There's an assumption that once you attain a certain level of near perfection in your art, you'll continue to impress with an infinite supply of steamy energy. Whelan especially has a reputation for being dazzling and transcendental. She's beloved by some and deplored by others, her idiosyncratic movement proving divisive among critics. But her fans are diehard, extolling her emotionalism in pas de deux like This Bitter Earth and After the Rain. And no matter your stance, Whelan's lure is undeniable. She benefits from a unique skillset that allows her to not only defy gravity, but also technique, conventional line, and preconceived notions of ballet to become a spectral entity, the dancer who haunts your dreams.

But if audiences wanted to see that Wendy -- the one who walks on clouds with casual elegance -- at the Joyce last week, they must have endured a terrible surprise. With a few exceptions, she went AWOL in Restless Creature.

The bill was a collaboration between Whelan, Alejandro Cerrudo, Joshua Beamish, Kyle Abraham, and Brian Brooks and was conceived as an opportunity to feature one of the United States' most adored ballerinas alongside celebrated dancer/choreographers. It premiered at Jacob's Pillow in 2013, and somehow it transferred to the Joyce, demonstrating what names and money can do in the Manhattan arts scene.

Cerrudo's pas de deux, Ego et Tu, set the tone for the entire program, emphasizing Whelan's awkwardness without purpose. In fact, she seemed an afterthought; Cerrudo stood in the spotlight, magnetic but somehow uninteresting. As the piano bellowed and violins and violas hummed, the ambiance was suddenly laughable in its melodrama. There was a splattering of grey. There were "intimate" moments that felt cold. What was noticeably absent was content, something to grapple with or feel.

Beamish's piece followed and was slightly more convincing in its ingenuity. He's not as talented of a dancer as the other choreographers, and so he had to make up for his failings by actually caring about aesthetic. For a while, Conditional Sentences was bearable and even amusing. Beamish played with shapes and angles, highlighting quirks like in a Mondrian painting. Some of his subtleties in épaulement were delightful, and while he didn't put anything breathtaking on the canvas, his was a solid, albeit never-ending, duet.

Next, The Serpent and the Smoke was the afternoon's saving grace, and it was glorious indeed. Abraham harbors this dynamism that makes his every moment enthralling. You track his pinkie as it lingers in gravity. You stare at his intensity and hope it envelops you. But The Serpent and the Smoke wasn't about him; it was about an "us" that he founded with Whelan. They pranced like fireflies in darkness, and the stage transformed into an evening on the green. As Whelan's hair finally fell, she wasn't stiff anymore; Abraham calmed her, carrying her to that place where she could be a goddess in the ether.

As Whelan and Brooks dropped for the last time and all five dancers took their bows, patrons applauded politely, shouting extra praise for Abraham. They left the theater with much less enthusiasm than when they came, wishing for a refund on their $100 ticket so they could head to Lincoln Center for American Ballet Theatre's new Sleeping Beauty. Maybe it would be less disappointing.

I, in turn, walked towards 9th Avenue, perplexed. I understood Abraham's involvement, and he earned his keep. But as for the others, why them? Justin Peck can dance. Troy Schumacher, too. Marcelo Gomes is now choreographing. Female blood would have been nice -- say Emery Lecrone. With the right team, Restless Creature really could have been something. It wasn't.