No wonder kids are flocking to Florence to get an MFA in restoration, one of the disciplines offered by Studio Art Centers International (SACI), a U.S. non-profit 501 c (3) university program based in Italy.

Under an agreement between The Caravaggio Foundation in Malta and SACI, professor Roberta Lapucci led SACI MFA students to restore one of Caravaggio's masterpieces -- the Zejtun painting -- in Saint Johns Co-Cathedral in Malta. 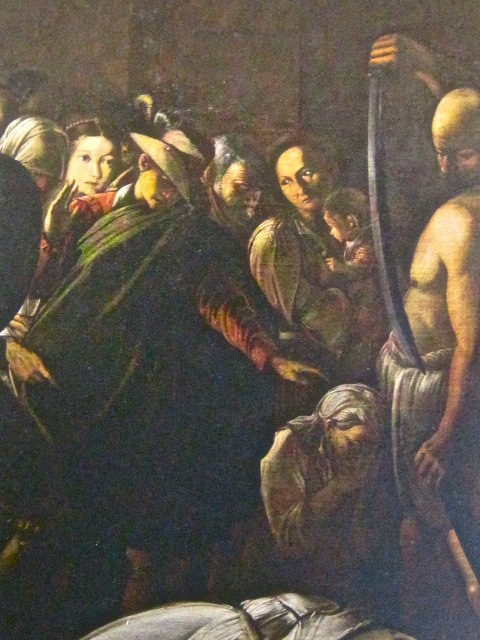 SACI was asked by The Caravaggio Foundation to insure the painting for 15 million Euros (about 20 million dollars) when they brought the work to their studio in Florence, and started work. It has since been restored to mint condition after two years of slow and tedious work and is now valued at about 500 million Euros.

As the students are learning -- and many art lovers too -- the best art transcends time and place and speaks directly to our common humanity, our sense of justice, our desire for truth. This is true for the work of Caravaggio, born Michelangelo Merisi (1573-1610) but known most of life as simply Caravaggio, which is actually the town from which his family originated near Milan.

Caravaggio painted in Rome most of his life although his work was largely rejected at the time on the grounds of "indecorum," according to many biographers. His career in Rome was brought to an end in 1606 because of a quarrel and fatal stabbing. (Apparently such quarrels were not unusual for Caravaggio.) Caravaggio fled to Naples where he painted several works before going on to Malta in 1607. Here he was well received by the Grand Master of the Order of St. John of whom he painted many portraits including John the Baptist.

In the last 10 years SACI students, often engaging other students from nearby schools with an interest in conservation has restored close to twenty buildings, paintings, statutes, frescos and mosaics for Malta and Florence. It is quite an opportunity but as Roberta Lapucci, emphasizes, students need to know all about the artist, their life and thoughts, the materials they used etc., before touching the piece to be restored.

SACI, founded over 35 years ago to give American students an international experience, is only one of more than 145 "study abroad" programs in Italy, according to Portia Prebys, President of the Association of American Colleges and University Programs (AACUPI) based in Rome.

But not many programs offer the restoration experience.