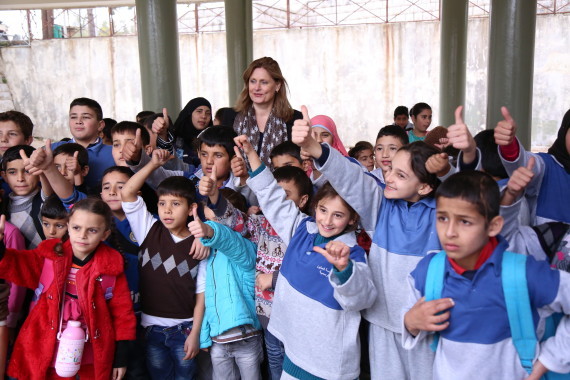 By Sarah Brown, President of Theirworld and Executive Chair of the Global Business Coalition for Education

When a crisis on the scale of Syria's conflict makes its impact it is hard to know just what actions are needed to both save and improve people's lives.

The first response lies in addressing the most basic needs; safety and shelter, clean water and food, sanitation and emergency healthcare. Then there is the political response; the struggle to find whatever complex solution will bring the lasting peace that Syrians crave.
And in the midst of this, there is the challenge to restore dignity and hope for the future to all those displaced by the terrible war.

This is the challenge that engaged our team at Theirworld as a small child-focused charity with a range of campaign and innovation project skills to offer. We asked ourselves if we could help identify what better actions to take and mobilise a movement in support.

Our focus moved quickly to education - entirely missing from the forefront of the humanitarian, political or financial response, but so vital to keep children safe and hope alive. Getting children back to school and learning gives them and their families what they need to create a better future and an incalculable sense of purpose and engagement in the midst of bleak circumstances.

In 2013 Theirworld launched A World At School, a campaign network to mobilise the diverse groups that understood the importance of education, even at times of great uncertainty. By galvanizing and steering A World at School we saw a global movement for education flourish in a way not seen for a generation. Support came early from the governments and non-profit groups who are able to provide education services should the financial support come; from dedicated education professionals and researchers keen to see a breakthrough, and from many individuals who were just moved by the plight of Syria's children to sign up in support.

Over the next two years we worked with organisations as diverse as Facebook, Avaaz and Angry Birds and were joined by high profile individuals, like the Rev Desmond Tutu and singer Shakira. Our 500 Global Youth Ambassadors have presented their case in international meetings across the world. And perhaps most importantly, we've also supported the practical way education could be delivered to Syrian refugee children - backing double-shift schools to allow Syrian children to access education in Turkey, Lebanon and Jordan and advocating for Safe Schools.

In 2013 aid for basic education was on the decline, numbers of children out of school had increased and attacks on schools reached a forty-year high but the tide is turning.

In 2016, there is a more optimistic story to tell. Last year, we delivered the world's biggest petition on education, supported by more than 10 million people working with partners like BRAC, War Child and Kenya's SHOFCO. We harnessed UN leaders like UNESCO's Irina Bokova, UNICEF's Tony Lake, UN Education Envoy Gordon Brown and even the UN Secretary General himself to extend our reach. We connected with all kinds of decision makers, donors, journalists and business leaders who joined the campaign.

We were invited to join world leaders at the Syria Pledging Conference in London at the start of the year and brought in the private sector commitments of $75million with the Global Business Coalition for Education.

Next week, GBC-Education launches a new major commitment at the World Humanitarian Summit, and Theirworld is there to cheer on the launch of a ground breaking new fund for education in emergencies in Istanbul.

So perhaps the easy part has been completed and like school work can be marked - political commitment Tick, first tranche of funding Tick, over 200,000 Syrian children back at school Tick, new fund for the next emergency, big Tick. Moving forward, the next practical steps to bring education back for all children excluded from school when their lives were disrupted are harder. Last year we made a huge promise that one million Syrian children would have a place to return to school before the end of 2016. This is on track but needs real commitment to remove every barrier that stands in the way. Whatever it takes, Theirworld is ready to act and will keep pushing forward with our partners and fellow campaigners to create a brighter future for every child.