Recently, Jeff Jarvis at the City University of NY held an event on restoring fact-checking to the news business. He did a really good job getting a bunch of players in this arena to play well together.

Special thanks also the to the Tow-Knight Center for Entrepreneurial Journalism. (My contribution has been overstated, mostly prompting the event and tagging it as #factfest.)

Here's my very brief attempt at getting my head around what happened and what's happening with big deal fact-checking. I'm biased, mostly wanting to have news again that I can trust, while figuring that I'm not in the news business and I'm not going to tell people how to do their job.

I'm subject to confirmation bias as well, wanting to see what I hope's happening. Politically, I'm what I call a "libertarian pragmatist."

1. Most people also want news they can trust again. That's true of most journalists, but most find that their publishers find fact-checking too lengthy and expensive. It's like most publishers feel that if everyone else is cheating, it's okay for them to cheat.

2. Specifically, people want news and opinion to be fact-checked, that is, evidence and reality based. Even pundits should operate on the evidence.

3. There already exist independent networks of fact-checkers: at politifact.com, factcheck.org, and sunlightfoundation.com. There are also partisan "fact-checkers," some of which operate in good faith, and some which deliberately seek to deceive.

4. There's no large scale successful network of citizen fact-checkers or contributors to fact-checking. However, American Public Media's Public Insight Network already succeeds as a sizable, funded, effective network of citizens which contribute to real journalism. In the near future, they plan to become a citizen fact-checking network, directly working with the Center for Public Integrity. Also, the folks at Hypothes.is seek to build a large peer review network, focused on people with specific expertise, and this might get big.

5. Current software research may result in systems to help fact-checking, but not in the current time frame.

6. My take: in the near term we can build a network of networks of fact-checkers, both professional and citizen. This requires a little standardization of the way each fact-checking database represents fact-checks, whether of statements, public figures (mostly politicians), and pundits. That is, each fact-checking database would respond to a query in a standard format, and return a verdict and a link to the reasoning behind that verdict. The devil's in the details, for example, a search regarding a statement would need to recognize different versions and phrasing of a particular statement.

7. News sites would need a means to indicate which statements, public figures, or pundits which have been fact-checked. The indicator could be a widget, which when clicked, queries the database, or it could be pre-populated. It could also take the form of "truth goggles," a project of the MIT Media Lab, where a cursor placed over a statement would display the results of fact-checking.

8. The widget or truth goggle could also be used to request fact-checking. Either technique would be enhanced by browser plugins which might automatically scan text or video for previous fact-checking.

9. Alternatively, in real-time video interviewing, the database could be checked quickly. For example, if an interviewer suspects the interview subject is misstating facts, a control room operator could quickly search fact-checking database.

10. News outlets which used these tools for fact-checking would become regarded as trustworthy. The others, well, not so much.

Okay, I've been living with this a long time, and trying too hard to be concise; both mean I'm being unclear or glossing over detail.

However, this is the biggest thing I might help with in my life, and feel that I need to say something and move the effort ahead. 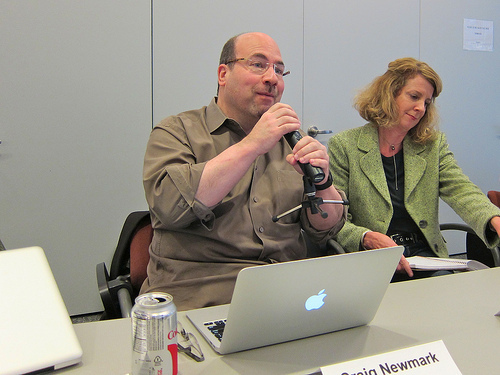 [photo by Fabrice Florin at the fact-checking conference]