Five years ago on the day after Christmas, Boxing Day as it is known, the world experienced the deadliest tsunami in recorded history. Millions of people's lives were changed utterly and irreparably, and thousands of towns and villages were simply swept away. Nevertheless, the raging force of nature was met with an equally powerful and formidable countervailing force: the compassion of the human heart. After the water returned to the ocean, an avalanche of aid, donations and sympathy was channeled to the affected countries from nations, organizations and individuals around the world.

I was there on that day, and I was one of the lucky few able to go back to my family and the warmth of our home. Unfortunately, millions of others who survived were displaced and their recovery and rebuilding processes were substantially delayed. Four months after the tsunami, I returned to Thailand to see how I could help. I saw families without homes, children without parents and incomprehensible destruction. After seeing children without a single spark of hope in their eyes, I felt the need to do what I could to restore hope and happiness in their lives. And so, with the generous help of others, I established the Happy Hearts Fund (HHF) in 2006. Since then, HHF has expanded, and the hard-working HHF team, led by executive director Phillip Caputo, is now directly helping children in post-disaster areas in eight countries: Haiti, India, Indonesia, Mexico, Peru, Sri Lanka, Thailand, and Hurricane Katrina-affected areas of the United States.

Unlike malaria or polio, we can't work towards a cure for natural disasters or prevent them from ever happening -- but we can restore hope by helping communities get back on their own feet through rebuilding in safe and sustainable ways and creating opportunities for a better future. And that's exactly what the Happy Hearts Fund strives to do. First, HHF identifies adversely affected schools and rebuilds them so that they can withstand future disasters. Secondly, HHF supplies each school with a computer lab and provides needed IT software, hardware and training to ensure every child has the opportunity to receive a better education, experience the world via technology, and learn new, valuable skills. 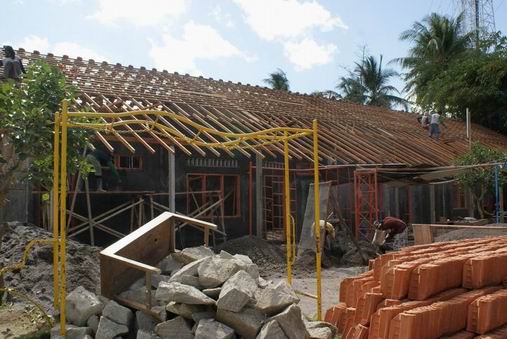 A before shot of the Sriharjo Primary School near Yogyakarta City, Indonesia 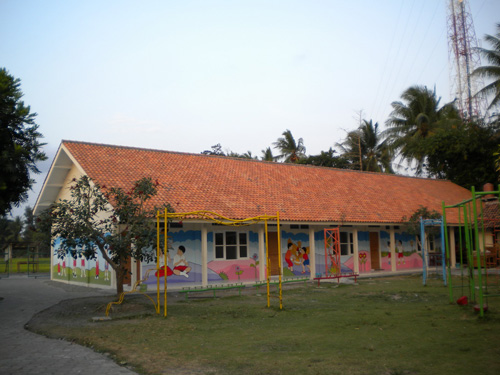 An after shot of the Sriharjo Primary School

Finally, HHF ensures sustainability in each project. We establish and incubate a small business -- like a bakery or a similar community-oriented business -- where revenues are used for ongoing school maintenance. That way, HHF ensures its investment will have the financial resources necessary to maintain the school for years to come, while giving a sense of pride and ownership back to the community. Each year, we help more than 12,000 children and 230,000 community members in disaster-affected areas by giving them the tools they need to rebuild their lives and create a better future for generations to come. 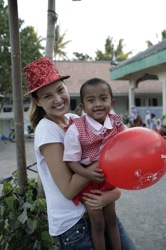 We have seen our schools serve as a stabilizing, restorative force in rebuilding the lives of children and whole communities by bridging the gap between emergency post-disaster relief and fully restored infrastructure. The immediate reconstruction of schools constitutes a key element of relief as it allows children -- who are found to be struck the most by tragedy -- to start the healing and recovery process. It is one of the most surefire ways to rebuild a child's life and revitalize communities. While children are attending classes, parents and community members are able to focus on the return to daily work, which is fundamental to caring for their families and rebuilding devastated economies.

The last five years have been difficult for all tsunami survivors, especially the children. I can't help but think of that 6-year-old child who lost both parents and is still struggling with long-term physical and emotional trauma. That child is now turning 11 years old and is on the cusp of adolescence. How does he process what happened? How can she source the resilience required to believe that the world is still a happy place where we must all give back and help one another?

The work of HHF is not just aspirational do-gooding; it makes good common sense. The world is becoming smaller and more fragile. We need every mind and every pair of hands to make the planet a more livable, kind and just place to live. For better or worse, our lives are now inextricably entwined with that 11-year-old child, and HHF wants to make sure we are all better for it.

HHF is a relatively young group but it has already distinguished itself as one of the most innovative and adaptive organizations contributing to post-disaster recovery. We are marking the fifth anniversary of the tsunami by launching the "Bring Happiness Back!" campaign, part of which is a short video that we hope will raise awareness about the power of nature to change lives in a moment, and, most importantly, the power of the human heart to bring happiness back.

Whether it be the Boxing Day tsunami, Hurricane Katrina or an earthquake in Peru -- behind every disaster, there are thousands of stories about thousands of forgotten children whose lives have been stopped and changed forever. Our goal is to "Bring Happiness Back!" to the children who are forgotten. As its first goal, the "Bring Happiness Back!" campaign will seek to raise $200,000 in two months starting December 15 for the reconstruction of six of the 40 kindergartens that were destroyed in Java, Indonesia by the September 2009 earthquake. We have seen the incredible impact that a rebuilt kindergarten or access to a computer can make in a child's life, and we are keen to do more. You can be the one bringing the happiness back to those forgotten children.

Petra Nemcova was in Thailand when the Boxing Day Tsunami struck. She is the founder and chair of the Happy Hearts Fund.