The 2016 elections threw a bucket of cold water into the face of free-trade orthodoxy. It's no surprise that voters in Wisconsin, Michigan, Ohio, Pennsylvania, and elsewhere are deeply discouraged by decades of failed promises of boon from establishment leaders. The real surprise is, what took us so long? 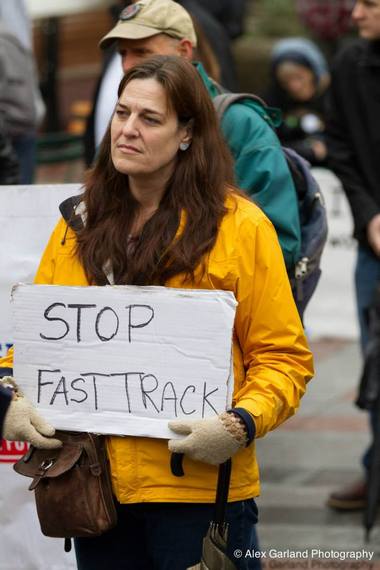 We need a new approach to globalization that does as much for workers and the environment as it does for global investors.

Our failed "neoliberal" approach has been to manage globalization through trade deals, written by and for the interests of global companies. The neoliberal vision is a fully integrated global economy, where national identities are blurred, shareholder interests have top priority, public interests are devalued, and gains go almost entirely to investors.

Nothing in trade theory or history says global economic integration is a good idea.

In this neoliberal vision, markets will solve all our problems, government is bad, and power and influence should favor those who already have plenty of both.

A growing number of economists and policy-makers recognize that neoliberalism is exhausted, politically unstable, and increasingly reckless. Martin Wolf, the most influential living British economist, argues that our failed market orthodoxy weakens Democracy. What Wolf sees in Europe is doubled in the US political experience.

The collapse of the Trans-Pacific Partnership (TPP), a 12-country NAFTA clone, is a historic event. TPP was radioactive all through the presidential campaign, for good reason - voters have lost trust in the neoliberal NAFTA approach to globalization.

The discussion has started on a new approach. Representative Sander Levin and economist Simon Johnson recognize that our distorted power relationships and insistence on maximum possible trade cannot solve our problems.

Jeff Faux makes it crystal clear. It's time to start over.

"The trade policy of the last quarter century is now bankrupt, economically and politically. This is the moment for America to go back to the drawing board and rethink strategies for competing in the global economy in ways that raise living standards for all."

Go back to the purpose for any political economy - what policies bring economic security, and balance interests fairly so we can prosper together?

The AFL-CIO's proposal starts at ground zero - eliminate the special dispute settlement system popularized in NAFTA and duplicated in subsequent trade deals. This "investor-state-dispute-settlement" system, known as ISDS, operates on a simple principle. Sure, governments can regulate, but they must pay investors for "unfairness" of policy changes that interfere with trade.

Under NAFTA-style neoliberalism, the governance principle is that investments are sacred, and public interest operates in whatever policy space is left. By ditching that neoliberal corporate-centric principle, we make it clear that public interest is legitimate and meaningful.

We are happy to balance public interests with investor interests, fairly. That's what we do under the US Constitution. Other modern democracies do that in their own legal tradition.

And we must address the two defining problems of our time, inequality and climate change. These are the market failures of global proportions. We absolutely need public policies to solve them.

Inequality comes from too much power at the top and too little power for workers and communities. Workers can claim a share of the gains they create if they have good jobs that create gains, and they have economic and political power to claim their share of those gains.

Every country in the world has an industrial strategy for creating jobs and sharing gains. Ours sucks.

Climate change is arguably the biggest market failure in human history. The Sierra Club's discussion paper introduces a new mechanism for balancing public and business interests. First, we acknowledge that environmentally sustainable policies are in our national interests. All countries share that interest, and most have made commitments to meet environmental standards.

The discussion paper starts with a fundamental political value.

"Trade and investment should be treated as tools for advancing public interest objectives - not ends in and of themselves."

If we had a Constitution for globalization, that value would be in the preamble. It would frame the rest of the provisions. We don't need "maximum possible trade." The optimal level of trade may be less than what we have now. Just sayin'.

The Sierra Club paper gets to the trust issue eating at our national political spirit.

"Above all, if the legitimacy of our democratic political systems is to be maintained, economic policy must be orientated towards promoting the interests of the many not the few; in the first place would be the citizenry, to whom the politicians are accountable. If we fail to do this, the basis of our political order seems likely to founder."

Furthermore, this is not a question of the US national interests versus other countries' national interests. Remember - our NAFTA-style neoliberal approach puts the 1% in each country at odds with workers and communities in each country. That can be rearranged, so that we trade, and we share the gains from globalization, and deal with inequality, and manage climate change.

This approach to trade would work equally well in terms of labor rights and human rights. Countries around the world have endorsed labor standards, such as no slave labor or forced labor; no child labor; no discrimination on the basis of religion, country of origin, gender; freedom to form unions; no human trafficking. The border adjustment mechanism could be expanded to investigate, hear disputes, and impose sanctions regarding labor rights and human trafficking.

The mechanism applies equally well to commitments made for investors(!!) - currency manipulation, state-owned enterprises, illegal expropriations, patent and licensing violations and so on.

The premise is that government has a legitimate role in managing the economy to reflect our own moral, social and political values. We decide how to express public interests, and our trade policy carries that forward.