You know how as soon as you restrict your calories, all you want to do is eat a whole tray of warm chocolate chip cookies?

It's not just you.

I want to share a research study that shows the frightening effects of calorie deprivation.

The amazing thing about this study is that it's not so different from the conditions that we put ourselves under all the time in the name of "dieting." 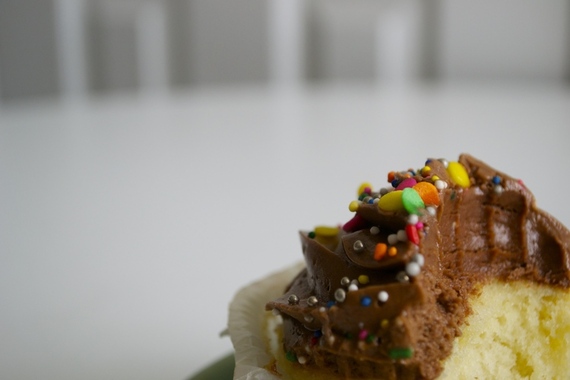 WWII was winding down in Europe, and the Allies knew that as they entered cities in previously German-occupied Europe, they'd be running into a lot of starved, emaciated civilians.

As Kalm and Semba point out in their great overview in the Journal of Nutrition, at the time, "very little was known scientifically about human starvation or how to deal with people who had undergone this extreme degree of starvation."

So Ancel Keys, a young physiology professor at the University of Minnesota, recruited 35 healthy men, all conscientious objectors, and subjected them to 24 weeks of "semi-starvation." During this time they ate approximately 1,560 calories a day, primarily in the form of potatoes, turnips, rutabagas, dark bread, and macaroni. The objective was to make the men lose 25 percent of their body weight, and then re-feed them back to normal. They also were required to walk for 22 miles per week.

And let's talk about the crazy stuff that went down:

They felt exhausted, irritable, impatient, and easily annoyed. Men reported flipping out at each other for tiny things that wouldn't otherwise bother them -- their friends' idiosyncrasies or waiting too long in a line.

They become obsessed with food. Several men started collecting cookbooks and recipes; one man, Carlyle Frederick owned nearly 100 by the time the experiment was over. Another man was so tempted by a bakery window that he bought a dozen donuts and gave them to children on the street, just so he could watch their joy eating them. Men developed elaborate rituals to eat their food, or even mixed water in with the meal to make it look like more.

At first the participants were allowed to chew gum, but when some of them started chewing up to 40 sticks per day, gum was forbidden for fear that it would skew the results.

They stopped caring about almost anything else. One man reported that he couldn't wait for the experiment to be over not because it would be an end to physical discomfort, but because it was both exhausting and boring to be so obsessed with food. When they went to the movies, "you weren't particularly interested in the love scenes, but you noticed every time they ate and what they ate." They lost all interest in women, dating, and sex.

Perhaps the most telling element is how many finished the study. From Emily Deans:

"Only 32 of the original 36 completed the semi-starvation period. One man who broke diet admitted to stealing scrapings from the garbage cans, stealing and eating raw rutabagas, and stopping at shops to eat sundaes. Two of the men suffered severe psychological stress -- one became suicidal, and another cut off three of his fingers in an act of self-mutilation. Both men were taken to a psychiatric hospital."

And once they ended the semi-starvation period?

All of the men agreed that even after their three-month "rehabilitation period" they had still not fully recovered. One man had to have his stomach pumped in the hospital due to bingeing the first day after the experiment ended. Many reported that long after study ended, they still ate excessively. One described it as a "year-long cavity" that needed to be filled. Another, after finishing the study, reported that for a long time he "couldn't satisfy his craving for food by filling up his stomach."

That feeling -- I can't satisfy my craving for food by filling up my stomach -- I can definitely relate to that, and I know that so many of my clients can, too.

In fact, I can relate to all of those feelings -- feeling like everything a friend or lover does drives me crazy when I'm hungry, feeling obsessed with food, feeling anxious and irritable.

What is perhaps most striking to me about this is, first, how similar the conditions sound to many typical diets. The participants ate mostly "whole foods," just in a restricted, 1,600-calorie-per-day way.

And not only did they go a little crazy during the process, but it took them between two months and two years to recover.

Obviously, these men were at a healthy weight before the study, and losing so much weight led them to become underweight. Moreover, it does seem that they didn't have optimal levels of some nutrients -- their diet seemed very low protein, for example. And yet, I think it still provides powerful lessons about the problematic and lasting effects of calorie restriction.

At the end of the day, you have a choice when it comes to dealing with food and weight issues. You can try to willpower your way through, by restricting your calories or carbs or fat.

Or you can learn to listen to your body better: eating when you are hungry, stopping when you are full, making sure that you pay attention to your food, and figuring out the subconscious or hidden factors that were making you eat in an out-of-control way in the first place. I'll be frank -- restricting never worked for me, and it's what I advocate to my clients.

I'd love to hear from you! Can you relate to feeling crazy when you restrict your calories? What does that make you think about diets? I'd love to hear your reactions to this.

Wondering if your eating, exercise, and life could feel more authentic and easy? Check out Katie's free "What's Your Eating Style" ebook, with recommendations tailored just for you.