While many Christians celebrated Easter over a month ago as a result of differing calendar calculations, Orthodox Easter takes place much later this year, falling on May 5. Thus, at midnight on Saturday, May 4, the night that our fourth-century predecessor on the Throne of Constantinople, St. Gregory Nazianzus, described as "brighter than any sunlit day," some 300 million Orthodox Christians will swarm churches to hear the words: "Come, receive the light!"

On that night, throughout the world, entire congregations previously waiting in darkness and filled with anticipation will light up, their faces shining with joy and hope. Together they will all chant in numerous languages, depending on geography and culture, the triumphant hymn familiar to young and old: "Christ is risen from the dead, trampling death by death, and granting life to those in the tombs."

"Life to those in the tombs" refers to a refreshing perspective on Easter: we see an open tomb, not an empty grave. The miracle of the Resurrection then is an open invitation to a new way of living that prevails over the darkness within us and around us. The Orthodox icon of the Resurrection depicts Christ pulling Adam and Eve, our earliest prototypes of sinners, out of a tomb and into a new life. It is an image of liberation, often depicting broken chains and shattered padlocks. The light of Christ enters and brightens the furthest depths of human experience. No longer does the grip of hell, imprisonment and defeat cause us to become rigid, numb and indifferent. Resurrection is all about a new reality, a fresh perspective, a renewed life, where resentment, hardness and hostility are overcome.

Such darkness had reached its lowest point two days earlier on Good Friday (Holy and Great Friday, as Orthodox Christians prefer to call it), when the Crucifixion of Christ starkly reveals the sinful side of humankind that so often extinguishes light. The harsh reality of the Cross confronts us with the evil that transcends any act of terror, every expression of suffering, our selfish consumption, our wasteful pollution, our prideful discrimination (both racial and religious), and our disregard of the poor among us. Do we even recognize the wounds we have wrought upon the flesh of our brother and sister, as well as upon the body of the world? Faced with the seeming inevitability and impasse of so much suffering, it is easy to be cynical; it is tempting to dismiss issues like climate change or global conflict or regional violence or world hunger, criticizing those who transform these into political and national flags.

The Resurrection is a call to action and compassion. It challenges us to reflect on where we most deeply experience hostility and disunity. And images of this reality abound: Within the space of only a few weeks, in America alone, we have painfully witnessed the loss of children to gun violence, the loss of life to religious radicalism and the loss of residents to a plant explosion.

Still, as one Orthodox Easter hymn puts it, the Resurrection proposes "another way of seeing" and "another way of living." The Gospel message of the Resurrection is as simple as it is radical: We are called to stand for love where hatred persists, to preach compassion where injustice abounds, and to insist on dialogue where division prevails. Although it is easier to proclaim a Gospel of power and might, we must persist in encouraging conversation among unlikely partners from radically different backgrounds (whether Christians, Muslims, Jews or other faith communities), conservation of natural resources (whether for purposes of consumption, development or mere survival) and conversion of our habits (despite our reluctance and resistance).

When we stand honestly before the reality of evil, we can perceive the hope and light of the Resurrection. Orthodox Christians believe that the risen Christ lifts us from the gloom of despair and opens us to the experience of joy. "Be joyful!" was the first address by the risen Christ to the myrrh-bearing women and his disciples. It is with joy that the Gospel of Luke both begins: "I bring you good tidings of great joy" (2.10), and ends: the apostles "returned to Jerusalem with great joy" (24.52). And it is with joy that the Church will be a credible witness in the modern world.

In the words of another early predecessor on the Throne of Constantinople, St. John Chrysostom:

Let everyone share this feast of faith; let everyone enjoy the riches of goodness. Let none lament their poverty; for the universal kingdom has been revealed. Let none mourn their sins; for forgiveness has dawned from the grave. Let none fear death; for the Savior's death has set us free.

Easter is indeed the feast of feasts, the brightest of days. This is why for 40 days after the bright night of that Easter midnight, Orthodox Christians will continue to greet one another with the words: "Christ is Risen! Truly, He is Risen!" It is the joy of Easter that we pray will heal and prevail among all people and all of God's creation.

His All-Holiness Ecumenical Patriarch Bartholomew is Archbishop of Constantinople and spiritual leader for the world's 300 million Orthodox Christians. He is dedicated to advancing reconciliation among Christians, Jewish and Muslim communities, and is an active proponent of environmental causes. For his published work and statements, see 'Encountering the Mystery' (Doubleday, 2008) as well as three volumes published by Fordham University Press (2010-2012).

PHOTO GALLERY
Orthodox Easter 2013 Around The World
Download
Calling all HuffPost superfans!
Sign up for membership to become a founding member and help shape HuffPost's next chapter
Join HuffPost 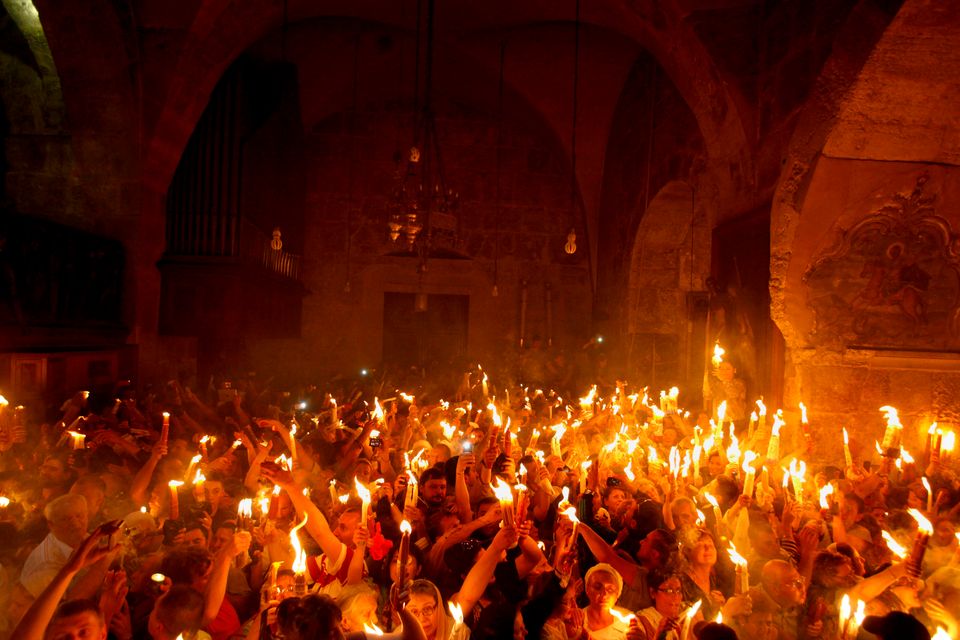 1 / 40
Orthodox Easter Jerusalem
Christian Orthodox worshippers hold up candles lit from the 'Holy Fire' as thousands gather in the Church of the Holy Sepulchre in Jerusalem's old city on May 4, 2013 during the 'Holy Fire' ceremony on the eve of the Orthodox Easter. Believers hold that the fire is miraculously sent from heaven to ignite candles held by the Greek Orthodox patriarch in an annual rite dating back to the 4th century that symbolises the resurrection of Jesus. AFP PHOTO/GALI TIBBON (Photo credit should read GALI TIBBON/AFP/Getty Images)
Getty Images