What happens when we die? This is one of the most enduring mysteries. While almost every person has their own opinion, most would ultimately shrug and say, "We can't bring people back from the dead to tell us, so we will never really know." But that is no longer true. Due to a revolution in the field of modern resuscitation science, particularly over the past decade, now we can. Today, by the lexicon of modern resuscitation science, death is in fact fully reversible. Death can no longer be considered an absolute moment but rather a process that can be reversed even many hours after it has taken place. How many hours? Well, we don't know precisely, but definitely long enough to say that many of the 1,514 lifeless bodies discovered in the water by the crew of the rescue ship RMS Carpathia two hours after the Titanic had sunk could have been brought back to life if the Titanic had sunk in 2012 instead of 1912. This is not a play on words; it is literal. A person can actually be brought back to life after the heart has stopped beating and the brain has flatlined. The reason? The discovery that it is only after a person actually dies that the cells in his body go through their own process of death, which can be manipulated through science.

As a result of these advances, we can now study what these people experience in that period after their heart stops and before they are brought back to life, which includes seeing a warm light, a beautiful compassionate being, or the sensation of separating from the body and seeing doctors and nurses or family members talking (an out-of-body experience). But rather than approaching this from a religious or philosophical point of view, we can now approach it from a scientific and medical perspective. This is what inspired me to write Erasing Death: The Science That Is Rewriting the Boundaries Between Life and Death -- to share what I and other doctors are discovering in hospitals all over the world. 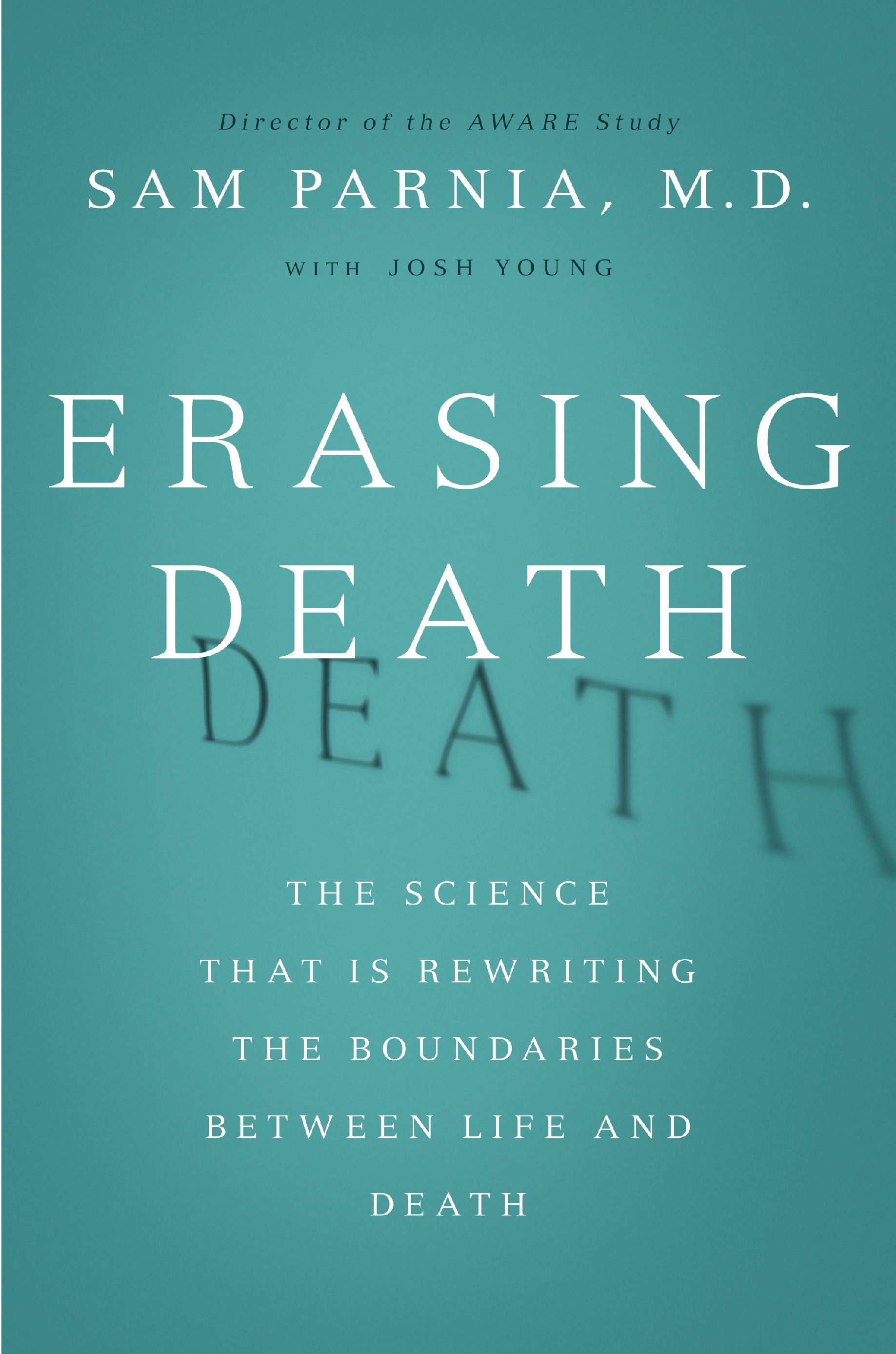 Because we have never had a science for studying death, we have never had an objective method to go beyond the threshold of death and study what happens both biologically and from a mental and cognitive perspective. In the past, everything that we have dealt with has basically been hearsay and people's own beliefs. But recent scientific advances have produced a seismic shift in our understanding of death. This has challenged our perceptions of death as being absolutely implacable and final. And so now many of our strongest-held views regarding death are outdated. In fact, where death is concerned, two major revolutions have already begun -- one of accomplishment, and another of understanding. In short, medical science is rendering previously unthinkable outcomes entirely plausible. We may soon be rescuing people from death's clutches many more hours -- or even longer -- after they have actually died.

In my work, I don't study people who are near death. I study people who have objectively and medically died. Therefore, what we've come to understand is that the experience that these people have of going beyond the threshold of death, entering the period after death for the first few tens of minutes or hours of time, can provide us with an indication of what we're all likely to experience when we go through death.

Doctors and researchers in various fields are forging this new path. They have developed equipment to deliver more effective chest compressions to help restart people's hearts. Neurologists have started to discover that contrary to the old dogma, supposedly vegetative patients may actually be conscious and aware of their surroundings and can carry out mental tasks on command. They are also are creating cold packs to enwrap heart-stopped patients, machines to push chilled saline into their veins, injections to preserve the cells of the body, and drips that deliver oxygen carefully draped by a microscopic layer of fat to cells in the remotest parts of the body after death.

Contrary to common perception, brain and other cells in the body can live for many hours after a person dies. There are different estimates on how long cells can survive without a blood supply and oxygen after death: bone cells for four days, skin cells for 24 hours. Although the oxygen and energy supply to brain cells is depleted within four to five minutes, brain cells remain viable but non-functioning for up to eight hours. Therefore, if cooling process and post-resuscitation care is done correctly, the patient can come back to life without brain damage. Cooling and optimal post-resuscitation care is one of the dividing points between those who suffer brain damage after cardiac arrest and those who don't. If cooled, all those cells that were deprived of oxygen can again return to normal. Brain death, the other term commonly used to define death, is thus simply a state of irreversible and irretrievable brain damage either after someone dies due to circulatory arrest -- when the heart stops beating (which is how we have always considered death) -- or due to some other process that causes brain damage (while largely sparing the other organs) such as occurs with a massive head injury.

Cooling is the most revolutionary advancement in the last 10 years. It is a braking mechanism that slows brain cell deterioration after death, preserving the body and saving the brain from damage. It enables physicians to safely reverse the cellular processes that take place after death. Although national and international medical bodies give the highest recommendation for its use, only 50-60 percent of hospitals in the U.S., Britain and Germany have been shown to have "cooling" systems and fewer eligible patients actually receive it. In 2012, it has been estimated that only around three to seven percent of eligible patients in the U.S. received cooling therapy, which may contribute to unnecessary deaths and brain damage and persistent vegetative state in survivors.

In June 2011, a 30-year-old female was found in a forest at 8:32 a.m. following an overdose of medications. She was dead. Her body temperature had dropped from 37˚C (98.5˚F) to 20˚C (68˚F), meaning that she had been there for several hours. The ambulance team arrived at 8:49 a.m., administered CPR and shocked her heart using an automated external defibrillator, but she remained dead.

When the woman arrived at the hospital at 9:22 a.m., her body temperature was still 20˚C (68˚F), and her pupils were fixed and dilated and not reactive to light, signifying that she remained dead. The emergency doctors performed CPR and inserted a breathing tube and ventilated her lungs with an automatic ventilator, all while continuing chest compressions. The drugs adrenaline, amiodarone, and lidocaine were injected to restart the heart. Despite efforts to begin warming her up, the woman's temperature remained unchanged. The doctors then hooked her up to the ECMO machine to ensure optimal oxygen supply.

After six hours of treatment, her temperature returned to 32˚C (89.5˚F), and her heart restarted. Although she had remained physically dead for at least five to 10 hours overnight without any treatment, and then for a further six hours while undergoing lifesaving treatment in the hospital, the woman was able to recover and eventually walk out of the hospital without organ and brain damage three weeks later. Because she had been naturally cooled down during the time that her heart was stopped, her cells did not sustain permanent damage and were able to return to functionality once oxygen delivery was restored. This is what is commonly known as a Near Death Experience, though I now propose that such experiences be termed After Death Experiences because the woman had, in fact, died.

As an unintended consequence of developing these new lifesaving measures, science is also expanding our knowledge of death. By finding new means to save lives, we are also inadvertently finding new ways to investigate and answer fundamental questions about what happens to human consciousness, to what we might call the mind, the "self," or even the "soul," during and after death -- questions that, until recently, were considered subjects better suited to theology, philosophy or maybe even science fiction.

In view of the rapidly evolving progress in the field of resuscitation science and the ever-expanding gray-zone period after death, I believe it is important to include what we would refer to as human consciousness, psyche or soul in future definitions and considerations regarding death. It would also perhaps be wise to concentrate some of our future research efforts on understanding the state of human consciousness after death has started, since the evidence currently suggests that it is not lost immediately after death but continues to exist for at least some time afterward.

While we don't have all the answers, we do know that the once-held philosophical idea that there is no way back after death is not accurate and that there is a significant period of time after death in which death is fully reversible. The goalposts have moved, and we don't know where the science will take us. But exploring this in its totality opens up an unchartered frontier that affects us all.