The American health care system may finally be catching up to the rest of the 21st-century economy, in which convenience is not only expected, but demanded -- and massive retailers are driving the change.

Patients suffering everyday complaints like chest colds or ankle sprains have long faced the lamentable choice between waiting days to see their family doctors or enduring time-sucking, unpleasant and expensive visits to hospital emergency rooms, especially at night and on weekends when physicians typically aren't open for business. It's one of the most annoying aspects of the way medical care is provided in the United States.

Big chains like CVS, Walgreens and Walmart are stepping in to try to correct this market failure. These and other retailers are opening hundreds of new walk-in clinics, staffed by medical professionals such as nurse practitioners and physician assistants. They're betting that Americans craving speed, convenience and easy-to-understand prices will be willing to break their habit of expecting a doctor to handle all of their medical issues.

"People are demanding health care to react similarly to other service industries, where people have a need and they want it relatively easy," said Nancy Gagliano, a primary care physician and chief medical officer for CVS Health's MinuteClinic. "The traditional health care system really is not adequate to support the need."

Although still vastly outnumbered by doctors' offices and hospitals, retail clinics are spreading rapidly: There currently are almost 1,900 across the U.S., up more than sevenfold since 2007, according to data compiled by Merchant Medicine, a consulting firm that tracks the sector. 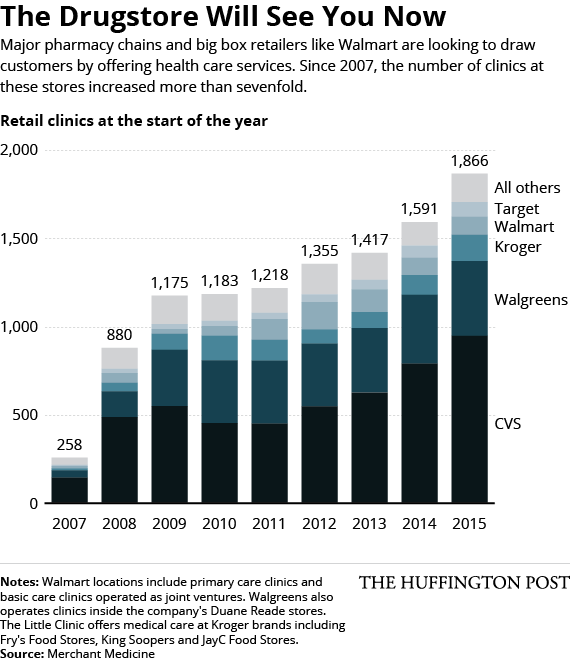 The time seems right for the health care landscape to include places such as CVS MinuteClinic, Walgreens Healthcare Clinic and Walmart Care Clinic, along with similar locations housed inside retailers such as Kroger, Target and Rite Aid.

For starters, patients appear eager for the clinics. When the Advisory Board Co., a Washington-based consulting firm, surveyed consumers last year, it found respondents valued being treated by a physician less than the convenience of night and weekend hours, getting seen without an appointment, and being able to fill prescriptions on-site.

"People are also more sophisticated than, I think, in the past, health care has given them credit for," Gagliano said. "They have a really good sense of when the MinuteClinic-type visit is appropriate for their needs and when it's worth waiting for their doctor for a more complex issue or more chronic and preventative-care follow-up."

CVS Health's MinuteClinic, the market leader with close to 1,000 locations in 31 states and the District of Columbia, had more than 18 million patient visits in 2013, up from 5 million just two years prior, according to the company. It plans to have 1,500 clinics by 2017.

Eric Knudtson of New York might be the prototypical retail clinic patient. Knudtson, a 23-year-old student, visited a clinic inside a New York City Duane Reade -- owned by Walgreens -- last week for a check-up. He opted for the clinic because it was convenient and because he doesn't have a regular doctor in the city, he told HuffPost.

"I just came here because it was on my way home from school," said Knudtson. The two times he used the Duane Reade clinic weren't as time-consuming as visiting a physician's office, he said. His visit last week took less than an hour, including wait time. "It seems like it's gone pretty quickly."

Locations like these offer basic check-ups plus vaccinations and treatment for minor ailments, and their medical professionals can write prescriptions. Unlike the pharmacy and grocery chains, Walmart is positioning itself as a true primary care provider, while both Walmart and Walgreens tout their services for patients with chronic diseases. Walmart sets a flat price of $40 per visit (or $4 for company employees), while CVS Health and Walgreens charge less than $100 for most treatments. Lab work, drugs, vaccines and other things carry additional fees.

Retail clinics can't replace the physician's office or the emergency room, retail executives emphasized. Doctors are better-trained than nurse practitioners and physician assistants and are more knowledgeable about their patients' medical histories. ERs are equipped to handle life-threatening medical problems that retailers cannot, and can admit the sickest patients directly to the hospitals. Retail clinics also typically offer a less-comprehensive set of services than urgent-care centers, and don't have as much high-tech equipment.

Records of what services a patient gets at a retail clinic may not be shared with their doctors, even though retailers can transmit them electronically or on paper. That could lead to problems such as unsafe mixing of medicines, physicians being unaware of changes to their patients' health, or tests and treatments being needlessly duplicated.

But there's also a well-documented shortage of primary care physicians in the U.S., making it harder for people to get timely appointments or even to find a family doctor. And medical schools can't churn them out quickly enough to meet the demand. This problem could become even more acute as millions of Americans get health care coverage because of the Affordable Care Act. Inadequate access to doctors also has prompted some states to loosen restrictions on what non-physician practitioners are allowed to do.

Between 40 percent and 50 percent of the patients who have visited the clinics at CVS, Walgreens and Walmart reported they have no regular primary care provider, according to executives at those companies.

At the same time, health insurance -- from employers and from the Obamacare exchanges -- increasingly requires patients to pay more when they get medical care. Retail clinics offer services at clearly marked prices that often are lower than at physician's offices and hospitals.

"We have what I term as a new age of consumerism," said Patrick Carroll, the chief medical officer for Walgreens Healthcare Clinics and a primary care physician. "They're making choices based on convenience and economics."

Another draw is that Americans are working longer -- and less flexible -- hours. Employers and employees alike welcome retail clinics that can treat workers' minor ailments quickly and get them back to work sooner, said Jennifer LaPerre, senior director of health and wellness at Walmart U.S.

"It's hard to leave work during the day hours when you need to get care. But if they need to, they certainly don't want to be gone long," LaPerre said.

For the struggling retail industry, medical clinics offer both a new source of revenue linked to the massive and growing U.S. health care market, as well as a means of driving foot traffic into their stores, where customers may buy other products.

"We really want to be able to serve that audience who probably is shopping in our stores, but who may not have access to affordable health care," LaPerre said.