Roughly 4.3 million Americans worked as retail salespeople as of last May, according to data released by the Labor Department Friday. On average, those working the country's most common job make just $25,310 per year, far less than the national average wage of $45,790 and not enough to keep a family of five out of poverty, according to federal standards.

America's second most common occupation, also in retail, is low-paying as well: The U.S. had around 3.3 million cashiers last May, who on average made just $20,370 per year, according to the Labor Department.

All of this is particularly bad news for women, who on average made just 64 percent as much as their male equivalents in retail sales last year, according to the Labor Department.

Low-wage work in general is on the rise. Roughly three-fifths of new jobs created during the economic recovery pay low wages, according to a 2012 study by the National Employment Law Project. And the retail industry has created 527,000 jobs since the end of the recession, according to the Labor Department.

Check out America's most common occupations below: 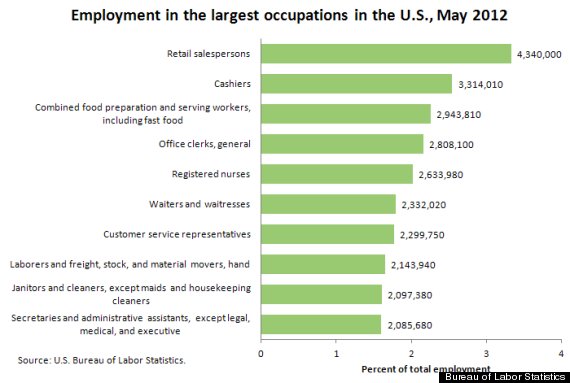