Major retailers and shipping companies are expected to hire some 738,800 temporary workers to meet increased demand during the holiday shopping rush, according to estimates from staffing experts Challenger, Gray & Christmas, Inc. Macy’s, UPS, and Amazon have already announced plans to hire tens of thousands of seasonal workers, with others, including Wal-Mart, yet to announce exact figures.

Click here to see the retailers hiring the most for the holidays.

Americans have historically done much of their holiday shopping at department stores such as Macy’s and Wal-mart. In recent years, however, online retailers such as Amazon have become a popular alternative. According to a study published this year by consulting firm Deloitte, 47 percent of consumers plan to spend as much online as they will in stores.

The increasing popularity of online shopping is apparent during the holidays, by far the busiest shopping period of the year. Black Friday, the day after Thanksgiving, kicks off the holiday shopping season with the biggest single day for retailers. However, some have been staying at home, waiting for online deals the following Monday, or Cyber Monday, as it is now called. To cover the expected additional sales, Amazon plans to hire 20,000 more seasonal workers than it did last year.

The growing popularity of online shopping is also largely responsible for the increased seasonal hiring at shipping companies such as FedEx and UPS. According to John Challenger, CEO of Challenger, Gray & Christmas, “The sector with the biggest increase in holiday hiring in recent years has been transportation and warehousing, as more and more holiday shopping is done online.”

With the continued success of e-commerce, brick-and-mortar retailers are struggling. Macy’s profits declined by 30 percent last year, and J.C. Penney has reported a net loss in each of the past three years, shaking shareholder confidence. Macy’s stock is currently trading at less than half its 10-year high, and J.C. Penney stock has lost nearly 90 percent of its value over the last decade.

To identify the retailers adding the most seasonal jobs for the 2016 holiday, 24/7 Wall St. reviewed the announced holiday hires of top retailers based on revenue in the Retail 100. Because their businesses are so closely related to retail, we also examined seasonal job additions at FedEx and UPS. Financial data were obtained from financial documents filed with the Securities and Exchange Commission (SEC) when available. Store counts are all customer-facing U.S. locations operated by the company.

These are the retailers hiring the most this holiday season.

As the nation's and the world’s largest retailer, Wal-Mart is also one of the largest seasonal hirers every year. The company, however, has yet to announce a specific figure for the number of temporary workers it plans to hire to handle the holiday shopping rush. Last year, the company hired 60,000 workers.

It has already begun to move some of its existing staff to serve as holiday helpers, who will work as greeters and assistants, handing out candy canes and helping customers find the fastest register line. These employees will begin their new jobs on November 4, three weeks before Black Friday.

Toy’s “R” Us hired 40,000 workers for last year's holiday shopping season. The company has yet to give a full account of its planned temporary hires this season. In a September press release, the company said it plans on hiring at least 1,000 workers in Washington, D.C., 1,200 in Chicago, 1,500 in Philadelphia, 2,700 in Los Angeles, and more than 4,500 in New York City. Holiday workers often take these positions because permanent jobs are not available, and most lose their jobs after the season ends. Toys ”R” Us added, however, that 15% to 20% of these workers typically keep their positions after Christmas.

Like many brick-and-mortar retailers, Toys ”R” Us is likely relying heavily on strong holiday sales to meet annual sales goals. The company has reported a net loss in each of the last three fiscal years, although that loss has shrunk each year.

Like many brick-and-mortar retailers, Nordstrom anticipates hiring fewer seasonal workers this year, adding 11,400 workers across the United States and Canada, or about 400 fewer than in 2015. According to the company, approximately 9,500 of these hires will be in sales or stocking shelves, while the remainder will work in the company’s e-commerce division, fulfilling orders at the company’s various distribution centers.

Bon-Ton Stores, an apparel chain, hired 13,500 employees this holiday season, about the same as last year. All of the company’s stores hosted a hiring event on September 30.

By far the least well-known company on this list, Radial is still an important part of the holiday shopping season, and will expand its workforce accordingly. Radial, a company out of King of Prussia, Pennsylvania, deals with company logistics and runs a number of distribution centers for retailers. Radial says it will add about 20,000 employees this holiday shopping season, tripling its workforce overnight.

According to the company, Radial’s peak business period begins as early as September. The company will add employees in the United States, Canada, the U.K., and Germany for the holidays.

Party City is different from every other company on this list in several important ways. First and foremost, it is the only retailer that is more than doubling its workforce for the holidays. Second, while most companies are hiring to account for increased sales associated with Christmas, Party City bolsters its workforce for Halloween.

The company opened 335 temporary Halloween stores in 2015 in the United States and Canada. Sales from the temporary locations, branded as Halloween City, accounted for roughly a quarter of the company’s total annual revenue -- approximately $84 million -- in 2015. The company estimates that some 68 million Americans will dress up for Halloween this year and 20 million pet owners will put their pet in a costume.

Retail giant J.C. Penney largely depends on holiday season sales. In preparation, the company is hiring 40,000 seasonal workers, equivalent to roughly 38% of its permanent workforce. The vast majority of seasonal hires will work in stores, and roughly 2,000 will be hired to handle online orders.

J.C. Penney hired 10,000 more seasonal workers this year compared to last year. The increase may be the result of less competition from other brick-and-mortar stores. Industry giants such as Macy’s and Kmart have both recently closed stores. However, while Macy’s has shuttered s 36 stores this year, with plans to close 100 more in the coming months, J.C. Penney has only closed seven stores this year.

While the vast majority of companies hiring tens of thousands of seasonal workers are retailers, FedEx is a service provider. Historically, there has been a significant uptick in the company's U.S. express package business in November and December. The package delivery company will hire an additional 50,000 workers in the coming months to compensate for increased demand over the holidays.

The company’s U.S. operations do not represent the entirety of its business. FedEx has operations in more than 220 countries, and a considerable share of its $50.4 billion in revenue in fiscal 2016 came from international business.

Kohl’s is one of the largest retailers in the country, with close to 1,200 stores in almost every state. The company is also one of the largest employers of seasonal works. About 30 percent of the company’s annual sales occur in November and December. Kohl’s will hire 69,000 temporary employees this year to account for the influx in shoppers. According a company press release, this year there will be an average of roughly 50 additional seasonal employees per store and several thousand more at distribution centers.

The number of seasonal employees the company is hiring this year is in line with the hiring during the holidays last year, but several thousand fewer than during 2014. The decrease is likely attributable to the shift in consumer preference from brick-and-mortar stores to online shopping. In an effort to adjust, the company opened a digital center in Silicon Valley in 2013.

Target is preparing for the holiday shopping season by hiring 77,500 seasonal associates. Compared to the previous two years, Target is hiring 7,500 more workers. This year's high number of seasonal hires indicates that the retail giant is optimistic about this holiday season's sales volume.

If history is a reliable indicator, Target has good reason to anticipate higher sales volume this year. The company’s reported a net income of $3.3 billion in fiscal 2015 after reporting a net loss of $1.6 billion. As is often the case with retailers, Target’s quarterly sales tend to be higher during the fourth quarter, which includes the holiday shopping season. Last year, the company reported $21.6 billion in sales in the fourth quarter, compared to less than $18 billion in the previous three quarters of 2015.

Macy’s has struggled in recent years. The company reported a net income of $1 billion, down from $1.5 billion 2016. The company’s share price has also dropped by more than half from the middle of last year. Some analysts predict the 2016 holiday season may bring relief to the struggling department store as there are two more days between Thanksgiving and Christmas this year than there were in 2015.

As with every other company on this list, the holiday season drives a considerable share of UPS’s revenue. According to a company press release, the company forecasts a record holiday season, and expects to deliver 700 million packages.

According to a survey conducted by consulting firm Deloitte, 47% of holiday shoppers plan to spend this year as much money online as they do in stores, continuing a trend that has been building momentum for years. Amazon, in particular, has been a driving force in the shift from brick-and-mortar retailers to online shopping. Amazon reported $107.0 billion in net sales in 2015, up from $89.0 billion in 2014 and $74.5 billion in 2013.

This year, Amazon will hire an additional 120,000 employees to meet the holiday demand, 20,000 more than in 2015 and once again more than any other company. In a press release announcing this year’s hires, the company noted that 14,000 of Amazon’s holiday workers last year were kept on in regular, full-time positions.

Click here to see the retailers hiring the most for the holidays.

Retailers Hiring The Most For The Holidays
Hilarious, but fake, Black Friday ads 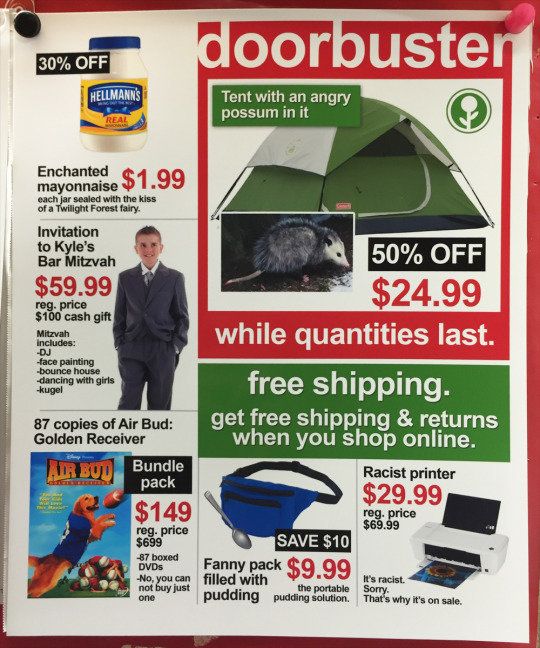