"Next Steps for the Anti-Mountaintop Removal Movement" is a series of interviews with affected residents and activists in the central Appalachian coalfields region, including West Virginia leader Bo Webb, Kentuckian Teri Blanton, Kathy Selvage in Virginia, Ash-Lee Woodard Henderson in Tennessee, and Appalachian Voices legislative aide JW Randolph in Washington, D.C. While the EPA scrambles to enforce the Clean Water Act and a Republican-controlled Congress attempts to defund strip-mining regulatory measures, and various state agencies continue to be embroiled in Big Coal machinations, millions of pounds of devastating explosives are detonated daily across mountain communities in central Appalachia. As a national movement, what should anti-mountaintop removal activists do next?

The beloved Judy Bonds referred to him as "our man in Washington." For other Appalachian activists eagerly awaiting his return to the region to run for Congress, eastern Tennessee native JW Randolph has played a major role on Capitol Hill as one of the top legislative strategists over the past five years -- and in the blogosphere -- in the campaign to end mountaintop removal mining.

As Rep. Frank Pallone (D-NJ) and Rep. Dave Reichert (R-WA) reintroduce the Clean Water Protection Act this week, the sleep-deprived father of a newborn babe will walk the halls of Congress once again with legions of other citizen lobbyists with the Alliance for Appalachia in an uphill legislative battle. 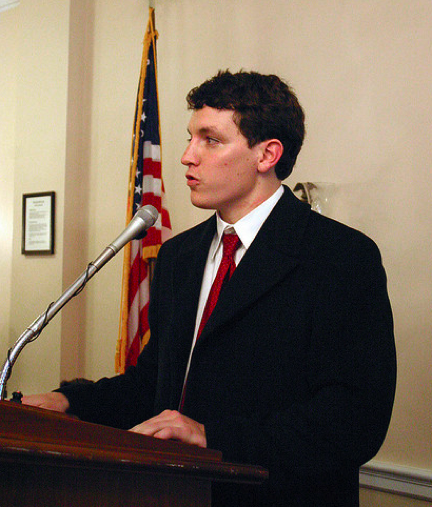 JR: Citizen lobbyists from Appalachia are the most important reason that more than 200 members of the House have already taken anti-MTR actions, the reason bipartisan Senate legislation to stop valley fills has been introduced, and the primary reason that President Obama and his administration have even taken the first glimpse at the issue of mountaintop removal. That's something that Representatives, Senators, and staff within the White House have made very clear to us. Continued citizen lobbying from Appalachia is an essential and growing piece of the puzzle to not just end mountaintop removal, but to begin building a sustainable future for the Appalachian region.

When I was just a kid in the mountains, I saw all this incredible energy being created around this horrible issue of mountaintop removal. But Congress and the president never mentioned it. The missing piece, it seemed to me, was a connection between the national movement created by the Appalachian people who were so incensed by this issue and our elected officials in Washington. Through monthly citizen lobbying efforts, Appalachian Voices and the Alliance for Appalachia has succeeded in bringing that message and our energy to Washington, and it is having an enormous impact. The coal lobby doesn't get freebies anymore, because thousands of regular American citizens -- who are on no kind of payroll -- are standing up and going toe-to-toe with them. And there is nothing more powerful than citizens who are taking their stories straight to decision makers.

To beat the coal industry it is important that the people of Appalachia continue to communicate our vision and our values beyond just one bill or one amendment or one case in court. Victories may come piece-by-piece, but you can't shape the future if you don't win the hearts and minds of the other people in Appalachia and America as a whole. I think that the pro-mountaintop movement is particularly good at letting people know that sure, we want to end mountaintop removal, but we also want to ensure that our miners are safe, that the communities we have are wholesome, and that what economy we have is sustainable.

JB: House Republicans unleashed a full-throttle attack on the EPA and its jurisdiction over mountaintop removal permits in their proposed 2011 budget. Considering the ease in which those EPA-stripping amendments passed, how do you gauge the clout of anti-mountaintop removal constituents on the Hill vs. Big Coal lobbyists? And what chance do those amendments stand with the Senate -- and President Obama?

JR: Well, those riders have only passed the House of Representatives, along with a host of other horrible and nihilistic amendments about a host of other issues that have absolutely nothing to do with spending. No pro-mountaintop removal amendments will make it out of the Senate, and it looks like Appalachian Voices and the Alliance for Appalachia will be successful in keeping those amendments out of the final budget. That will be a BIG victory for the people of Appalachia over the coal lobby.

Rep. Hal Rogers (KY-05) is the Chairman of the powerful House Appropriations Committee, and has more mountaintop removal in his district than anyone else in Congress. Unfortunately, the people in his district in eastern Kentucky also have the shortest life expectancy, the worst physical health, and some of the highest poverty in the United States in large part because of the impacts of coal. That shows you the values of some of the representatives we are dealing with.

JB: What's the status of the Appalachian Restoration Act and Clean Water Protection Act, both of which would effectively end mountaintop removal?

JR: In the House, the bipartisan Clean Water Protection Act should be reintroduced this week. There are a record 143 returning cosponsors for this bill. We know the Clean Water Protection Act has a lot of support in Congress, so this session we will be focusing less on trying to get an enormous cosponsor number and more on working directly with members of the Transportation and Infrastructure Committee (where 46% of all members have already taken an anti-MTR action) and the Water Resources Subcommittee (where 48% of all members have taken an anti-MTR action.)

In the Senate, things are very different than the House. All 12 of our cosponsors from last session still hold their seats. We have two powerful bipartisan Senators in Senator Cardin (D-MD) and Senator Alexander (R-TN) who are working very hard to pass legislation on this issue. Right now, these offices are working with other agencies to make sure that the bill does what they want it to, which is to stop fills from mountaintop removal. Our role is to make sure that they understand the impacts of their legislation on Appalachian citizens and communities, and we are working on making sure that the bill offers the strongest possible protections for Appalachian citizens. 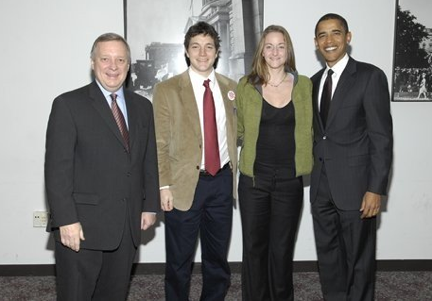 Additionally, an EPA guidance is good, but if we don't pass a law to make these protections permanent then the guidance can be overturned by the next President. The Obama EPA deserves credit in that they are the first Administration to take positive steps to protect citizens from the worst impacts of mountaintop removal. But, if you ignore Congress then you can not pass laws to offer permanent protections to Appalachian citizens, and secondly, Congress can nullify EPA's action, which they are trying to do.

JB: The first bill to end strip-mining was introduced in 1940 by Sen. Everett Dirksen--70 years ago. US. Rep. Ken Hechler, from WV, introduced a bill to abolish strip-mining in 1970, and held the first hearings on mountaintop removal in 1971. What makes you think Congress, especially this current Republican-held House, will change course and abolish MTR?

JR: Already, more than 200 members of the House have taken an anti-mountaintop removal action. We count that as anyone who has 1) cosponsored the Clean Water Protection Act 2) voted against bad HR 1 amendments that would have weakened what protections Appalachian citizens currently have from mountaintop removal. We can't stop just because things look difficult in Congress. Then we would never get anything done. Frankly, nothing is going to come easily in this Congress. But for the people of Appalachia to make any progress, we have to overcome long odds, cowardly elected officials from the region, and a powerful coal lobby with 150 years of sunken costs into cowing local, state, and federal officials into doing whatever they want them to do. There is no way around that.

JR: How much money goes into it? Not nearly enough. There is nothing that anybody does that is more effective than directly impacted citizens building relationships with their elected officials. This week we'll be meeting with more than 150 Congressional offices about the positive legislation, the bad bills, and how EPA's actions protect us. But we will also meet with federal agencies like EPA, OSM, and CEQ, just like we as we always have.

The political clout of the coal industry is waning, and the coal industry's influence has long outlasted their ability to provide sustainable economic development or job growth for the people of Appalachia. We have to come together and build relationships with our officials in Washington, but also build power at the state and local level, because the political system in Appalachia is broken and we are the only ones who can fix it.

JB: Strip-mining takes place in 24 states, including new proposals in the endangered Cook Inlet in Alaska, the Shawnee National Forest in southern Illinois, and wilderness areas near Bryce National Park in Utah. As you know, Sec. of Interior Ken Salazar just green-lighted strip-mining operations in Wyoming that will produce 750 million to 2 billion tons of coal -- several times the annual production of all Appalachia. Why do you only lobby to halt mountaintop removal in four central Appalachian states, and not only environmentally endangered regions?

And I think there needs to be an broad discussion about what comes "after" the Clean Water Protection Act. People say to me, look, the Clean Water Protection Act isn't enough, we need to abolish ALL mountaintop removal and strip-mining! And I don't disagree, but what is the tool to do that? What bill or rule would get us there? Our coalition and other national coalitions are looking at SMCRA, and are looking at what other tools we might have to offer citizens in coal-bearing communities greater protection. That's a good thing, but the current political reality of what can be done in the immediate future is limited. If you have 24 states that are doing strip-mining, that's 48 Senators who have an interest in protecting strip-mining. Until people from the Powder River Basin and the Illinois Basin and the Appalachian Basin are working together to convince our elected officials to protect us from strip-mining, we can't make it happen.

At this point, the important thing to realize for those of us fighting mountaintop removal, is that we are all playing important roles through different tactics. Citizen lobbying is one of the most important reasons that we are seeing positive progress on the issue of mountaintop removal, but direct action and successful litigation also play an enormous and complimentary role. It is part of a 1-2 punch. The only way to permanently end mountaintop removal is to pass a law banning the practice. But its not just citizen lobbying that will make that happen. Groups like RAN, Greenpeace, and Appalachia Rising who do mass mobilization and direct actions play a critical role. People like Joe Lovett and Mary Cromer and Cale Jaffe and Tom Cormons who are fighting the battle in courts play a critical role. Its all part of the same power that we are building together. There is absolutely no reason to try and slice and dice the movement based on which tactics a particular individual or group are focused on at that moment. The actions of our federal officials like Joe Manchin are having a negative impact on the health and well-being of all the people of our region, and its going to take every lobbyist and every litigator and every citizen who is willing to stand up speak the truth to hold cowardly men like him accountable and take our futures into our own hands.