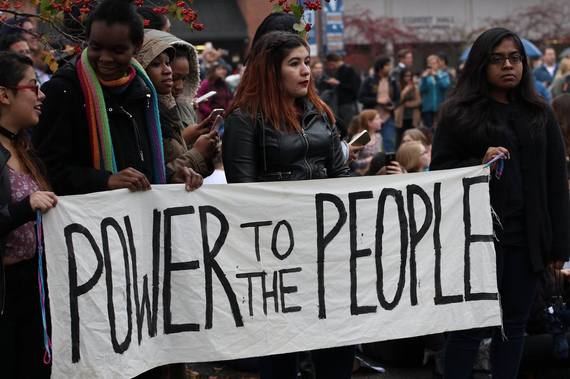 Originally issued by the Black Ivy Coalition through Facebook on Wednesday, November 11th, variations of their statement (the above being one of them) have been shared widely across Facebook and Twitter in light of recent events that have finally surfaced to the level of boldly unapologetic dissent at which one can no longer turn a blind eye to.

Within higher education, institutional, structural, internalized and individual forms of oppression have been dancing together, tightly intertwined and now deeply tangled in its web. We're tired of being cemented within this structure, and we demand emancipation from it. We are dissatisfied. We refuse to settle for "good enough" -- I refuse to celebrate an institution that scoffs at me when I explain that my "existence is resistance" as a latina woman because it is inevitably political; you made it this way. You see, under your gaze you deem our demand for respect as militant, labeling our struggle to be heard -- hell, to muster the courage to get the words to pass out of our lips -- as repressive of the freedom of speech of students who, I can assure you, have existences and voices that will remain perpetually privileged, prioritized, and preferable within our society.

Focus on elevating the voices of students who have been historically silenced, because as much as you'd love to believe that we are post-racial, the debris left over from an era of white supremacy still very much remains; in fact, it's an understatement, to claim that its form is now residual. The microaggressions, cultural appropriations, refusal to divest from oppressive institutions like private prisons, the classist nature of tuition hikes, the blatant disregard and lack of consideration for undocumented students within the financial aid process through the conflation between them and international students, the profound lack of urgency in addressing our concerns, the death threats against Black students at Mizzou, people of color (PoC's) fearing for their safety, the policing of campus protests without any regard to those who directly terrorize us -- this entity has evolved.

If students of color insistently demand that they are being neglected and trivialized, and there is "no one" there to hear it, do they still have a voice? Who is this audience that we must depend on for our existences to be validated, and why aren't we enough as an audience by ourselves? This is why it matters that Yale's President didn't address the concerns of PoC students, until he had no other choice. This is why it matters that Ithaca College students refuse to tolerate President Tom Rochon any longer. This is why it matters that Mizzou's now former President Tim Wolfe didn't give a damn, until we all watched or why a professor couldn't prioritize the safety of his students (who I'm sure if they were non-PoC, would have had no problem catering for) over administering an exam. As students, we begin to internalize this institutionally implanted guilt that because we're presumed ungrateful for our indignancy, maybe we actually don't belong: the administration at Yale, Mizzou, and Ithaca College doesn't listen, the lives of Black students at Mizzou were violently and anonymously threatened, some students at Cornell find classist humor in the possible withdrawal of students who are unable to pay for their tuition while we are then told not to repress the freedom of speech of the student body as if our own speech hasn't already been systematically repressed.

When you have students transitioning from racially/ethnically/income homogenous backgrounds, into spaces where their newly minoritized identities and its several implications within our closeted-racist/xenophobic society become salient for the first time, they deal with a host of complications. We internalize that we are the Other, and that as many times as we are deemed to be alien according to arbitrary land partitions, we are still alienated. We are #AdmittedNotAccepted -- a hashtag recently started by peers at Princeton University fighting against racist-themed parties portraying students of color as caricatures to be worn for a night -- in our colleges. These are not isolated incidents; by default, we are in solidarity with one another because our struggle is all too familiar, and sadly universal. It should not take the trauma of overt racism -- yes, call it for what it is -- for the indignancy of Black students to be legitimized through Mizzou. You do not question a person's pain when they are the ones who've sustained the fall -- over and over and over again. You do not question a generational suffering, when you've actively and passively participated in the institutional and structural entities that have sustained them. You do not question nor police our tone when observing us in silence. Again, I repeat, being admitted does not mean that we are accepted. Racism runs deep in our own backyard, because it was, and continues to be, profitable. Have you tried pulling out a plant by its roots? It doesn't let go.

Student organizations within, and independent from, Cornell have been extremely active in their pursuits for change, at times to the point of mental and physical exhaustion; at the end, however, it is all worth it. For student leaders -- e-board members, writers of color and other marginalized backgrounds co-authoring the future (Re)tension at Cornell series, protesters, researchers, RA's and SA's, social entrepreneurs, graduate students, TA's, etc. -- we've fostered our own homes within Cornell. Through these small, yet deeply interconnected communities, we've learned to decolonize our identities, establish allyship (and distinguish it from neoliberalism) within realms where we are privileged, dialogue when it is appropriate and not dialogue when communication isn't enough, and to act urgently; we've learned to love ourselves and embrace self-care if our justice is to be intersectional. We've learned to concentrate our efforts through inter-campus initiatives, such as our solidarity with POC at IC -- People of Color at Ithaca College (refer to our letter in solidarity) -- IvyQ Conference, Latinx Ivy League Conference, 1vyG for first-generation students -- we will continue to expand outside of the Ivy bubble. Leadership has taken on different shapes and forms, all equally as necessary.

There is no one "more palatable" form of activism whether it be dialogue, or direct resistance and interjections in the middle of events, in order for us to normalize our bodies within spaces that appear to not be our own. We must be present, our "existence is resistance", and we must document our own narratives. We must stand in solidarity with one another; if we don't, who else will?