Finally, one of my favorite holiday cards arrived in the mail -- the Miller family's annual New Year's card. It's always full of the anecdotes, accomplishments and concerns of their previous year, with a focus on what they are looking forward to. I like that. And I have time to read it: The hustle-bustle of the holiday is over, and it brightens the grey January days.

Could they be taking a page from Queen Elizabeth's playbook? (The first one, that is.) That playbook, in this case, would be her New Year's Gift Rolls.

Because back in the 16th century -- before Christmas became the Santa-fueled spending-spree we all know and love (sort of) courtesy of that other long-reigning queen, Victoria -- the gift-giving extravaganza came at New Year.

As Jane A. Lawson points out in her absorbing new tome, The Elizabethan New Year's Gift Exchanges, 1559-1603 just out this past year from Oxford University Press, gift giving was "widely acknowledged as a practice central to social and cultural cohesiveness; it bestows benefits on both the giver and the recipient."

My goodness if that doesn't sound a little like Portia's description of mercy in the Merchant of Venice. So, gift-giving can be construed as merciful.

These gift rolls (see slide #1) cover Good Queen Bess's nearly 45-year reign, although only 25 of the 45 are represented here (the rest have yet to turn up). But they are chock full of "information on a broad range of topics, including Elizabethan biography, language, social and economic conditions, as well as the age's costume, jewellery, and plate," states Lawson.

They are endlessly fascinating. Who got, and gave, what and when underscores who's in and out of the queen's favour, who's in riches and who's on the wane, not to mention some very creative gift-giving.

Are we surprised that the "lower" classes often gave much more interesting gifts, such as the 1559 offerings of Two pottes of Surropes and a boxe of Drogge by the good doctor, or two bottelles of muskewater and oone Loking glass couerid with Chrymsen Satten enbrauderid from Elizabeth's Italian tutor when she was a princess.

The big dogs, earls and duchesses and whatnot, mostly forked over cold hard cash, and in return got cold hard plate -- lots of silver and gold serving ware. Were you in this class, you could display it all in your Great Hall to show off how rich (and beloved) you were, much like the display of Christmas cards now ... until lately, of course, when tech has transformed such physical expressions into the ephemeral "Likes" on Facebook (it's tough to display a Jacquie Lawson card!).

But when you were in the royal doghouse only a jewel would do, such as the 1581 gift from Sir Philip Sidney (after a tennis court spat and some unsolicited marriage advice): a gold jewel in the shape of a whip, set with little diamonds and 4 rows of seed pearls*, signifying he was willing to be whipped into shape perhaps?

Or his father-in-law, Francis Walsingham, the queen's spymaster, the New Year after executing Mary, Queen of Scots: "one pouche of Blacke vellat [velvet] garnished with golde on bothe sydes, the one side [] with Sparkes of Dyamondes Rubyes and Opaulls with a pearle pendaunt..."

Below are just ghosts of what might pop up on Good Queen Bess's trestle table -- much like the gift table at a wedding -- because, where are those darn jewels anyway! Wouldn't you just love to see a: very fair juell of golde conte [containing] a woman holding a Ship of sparks of Diamonds upon her knee, the same fully garnished with Sparks of Diamonds, 4 fair rubies, one large Diamond & sundry smaller Diamonds & 3 pearls...*

Lawson's book is replete with enticing goodies and insider info like, did Queen Bess regift? You bet your sweet eringo. But it's not for the casual Kindle reader. Why? Because it's still in Old English, so a layman might puzzle over a quoshon being a cushion and other such spelling anomalies.

Plus, the hefty volume is a cool $275 -- no bargain-basement Barnes & Noble table here...
Aside: Yet another solid reason why we need libraries -- to house these delightful treasures so we can peek in and peruse for time travel... or gift ideas! So, next time you visit one of our venerable institutions, spend an afternoon soaking up some pre-Santa treasures c.1569.

It may spark a new New Year's resolution: swapping the pressures of Christmas -- Elizabethans celebrated the holiday by foregoing class distinctions and playing with everyone equally; lots of sports (we could move the Super Bowl!) -- for a New Year's Gift Roll of your own. Another perk: You'll be able to take advantage of all the January sales! 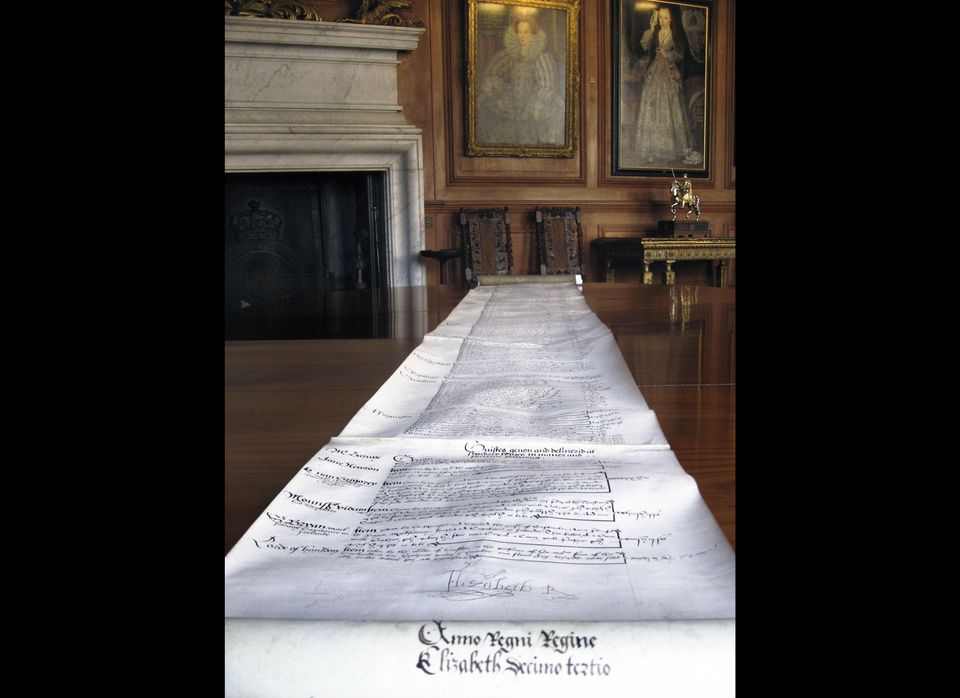 1 / 12
The Queen's Gift List
There's still time to revisit your Christmas Card and Gift List and see who you missed -- in some spheres New Year's carries on until February 2, <a href="http://en.wikipedia.org/wiki/Twelfth_Night_(holiday)" target="_hplink">Candlemas</a>. It took Jane Lawson over a decade to assemble and unravel the mysteries hidden in Queen Elizabeth's extant Gift Rolls; this 1571 list has Elizabeth herself imperiously gazing down on her generosity. To her right is Elizabeth Vernon, wife of the famous-thanks-to Shakespeare <a href="http://www.luminarium.org/encyclopedia/wriothesley3.htm" target="_hplink">3rd Earl of Southampton</a>. In 1598, he gave the queen a gold necklace encrusted with jewels (one Kartionet of golde conteyninge ix peeces of chein havinge a Ruby and viij with every of them a pearle one smale pendant of golde with a Spinell and three small pearles and viij smale pearles pendant and eight smale Rubies pendant) perhaps to curry favour since he'd gotten Vernon pregnant before marriage (they went to Fleet prison anyway). Upwards of 1,200 people are listed (about 1/3 women), with more than 4,400 gifts given to Elizabeth and nearly 5,000 royal gifts bestowed. Makes your own gift list seem a lot more manageable, doesn't it? <em>Portion of the Gift Roll: 1571 13 Elizabeth; Collection of the Duke of Buccleuch and Queensberry, K.T., Boughton House</em>