With the internet celebrating its 40th anniversary and increasingly making its way into our lives through sites like Facebook and Twitter, the timing is right for Ondi Timoner's excellent new documentary We Live in Public, which won the Grand Jury Prize at Sundance for best doc of 2009. That makes Timoner -- who won the same award in 2004 for her doc DiG! about the tense relationship and divergent paths of the Dandy Warhols and the Brian Jonestown Massacre -- the first director to win the award twice. 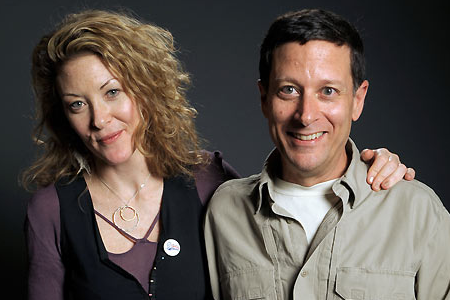 We Live in Public director Ondi Timoner with Joshua Harris

We Live in Public follows a man named Joshua Harris, who is billed as "the greatest internet pioneer you've never heard of". Over 10 years ago, Harris correctly predicted that TV would move online (YouTube, Hulu) and that average people would volunteer intimate details about their lives and make them public on the internet (MySpace, Facebook). Then, through a series of experiments that were more like performance art pieces, Harris attempted to enact this prediction in an extreme form that put the sanity and safety of others, as well as himself, at risk.

The first was called Quiet, where dozens of New Yorkers volunteered to live in an underground bunker with all amenities -- food, clothes, bed, chapel, interrogators, firing range (yeah, I know), etc. -- but they couldn't leave. In addition, their every move and word would be captured on video, streamed online, and could be viewed by the other Quiet participants. The second, called We Live in Public, involved Harris and then-girlfriend Tanya Corrin outfitting their New York loft with webcams and streaming their lives online, allowing viewers to comment and take sides on their relationship. It was this last experiment (and mounting financial problems) that cracked something in Harris, causing him to unplug and live on an apple farm for four years in an effort to reclaim himself.

The trailer for
We Live in Public
explains it better

I met Harris at the WLIP premiere in LA and emailed him some questions about the film, the future of the internet, and whether we really do or ever will truly live in public.

In We Live in Public, a woman says that we've become "slaves" to our PDAs, computers, Facebook, etc., and I've heard many other people echo this sentiment. But doesn't this leave out the crucial aspect that we have control over how/how much we use our technology (unless your job forces you to be on call 24/7)? Like Brad Pitt says in Fight Club, don't we all decide our own level of involvement?

For me it all boils down to "beak or beakless" (as in the Perdue chicken factory).

Yes any of us can get off the grid and go live in a jungle somewhere but almost none of us make that choice. And why should we when the modern world feeds and protects us mostly through the use of a myriad of technologies that keep us alive and amused? In my view, evolution's master plan is to simply use technology to more efficiently cultivate and harvest humans.

I go back to the my favorite Twilight Zone episode, "To Serve Man," where the guy finally figures out that the aliens who are "helping" earthlings by stopping war and introducing new technologies are in fact fattening us up for harvest on the home planet. In the end the earthlings decode the content of the alien bible and find out it is a cookbook.

Do you think Facebook/Twitter is people honestly living their lives online and in public, or is it just a more public place to create a public persona? Isn't this what we've always done, but just to a smaller audience?

Facebook and Twitter are simply utilities that have a limited shelf life (as they are now presented). They do not reflect the magic of the online medium nearly as well as Net Television will by late 2010. The key going forward is dynamic interaction (mostly in real time) of audiences. Facebook and Twitter are flat and thin in this respect. Going AOL old school: Facebook is simply a refined message board and Twitter is IM. The next big thing is chat on steriods or what I call Net Television.

What was it about living in public in your New York loft that caused your breakdown? How did moving to the apple farm help you recover from it? (I lived on a goat and zebra ranch in Santa Barbara County for 3.5 years and it was one of the best experiences of my life.)

The "breakdown" can better be described as an Exorcism. I attempted (successfully, I think) to do a self-excorcism on myself in order to compartmentalize "Luvvy" who is my virtual self. I spent four years alone on the farm (I only slept one night away in order for Luvvy to do a performance at the St. Marks church in the East Village of NYC) to just rest and recuperate. 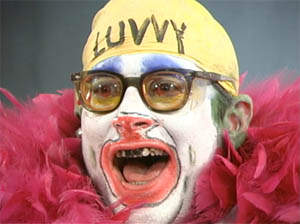 You had a great quote in an interview where you said, "Orwell was wrong; the government doesn't impose Big Brother. Audiences demand it." But do you think people really care about the boring minutiae of people's everyday lives who aren't beautiful, celebrities, or contestants doing challenges to win prizes? People get sick of reality shows after a while.

Orwell is wrong. We are going to demand "self surveillance." The key is the advent of the "home studio." Twenty years ago, "home theater" came along and recreated the theatrical experience from the comfort of the couch. Today's audiences are about to turn their homes into television studios (studio in a box). In essence the cameras, microphones and high speed net now available in most homes is simply going to be packaged, produced and monetized.

As for celebrity, the Internet is distributing (commodifying) each person's 15 minutes of fame more equitably than film or television.

Aren't the results of your Quiet and We Live in Public projects, along with the disintegration of most relationships followed on reality shows, and the fact that most bloggers quit after a few weeks prove that people only think they want to live in public, then quickly get bored/bothered by it? Would people actually put up with it if they didn't have to?

First the problem with "reality broadcast television" is that it is really just a facsimile of reality. The advent of "net television" will be realer than broadcast since the cameras and microphones will be turned inward on hundreds of millions of participants, viewers, watchers or whatever they will eventually be called. The issue going forward is how to orchestrate millions of "home studio" feeds into a compelling entertainment experience (that has profit margins comparable to golden age radio, film and television).

It is not so much a question of whether or not people will "put up" with self-surveillance but rather how well they can produce their lives for their virtual audiences.

I am in Los Angeles to build an Internet television network called "The Wired City."

Do you have any thoughts on what Web 4.0 might be?

Net Television as described above. Web 5.0 will introduce us to "hive" or "borg" interfaces. When we hit Web 6.0 the Singularity will be reached and the human being will cease to be an individual.

So you believe in the Singularity?

Yes. However Ray Kurzweil, the fella who coined the term, doesn't quite understand how it is presenting itself.

For more ReThink Reviews, go to ReThinkReviews.net (a work in progress).