According to the National Bureau of Economic Research, the Great Recession officially began in December 2007. But for many Americans (and most of the world), the recession truly began in September 2008 with the spectacular collapse of the investment bank Lehman Brothers. It was the largest bankruptcy in history, causing a stock market crater and a shockwave of panic that would eventually lead to the elimination of $10 trillion in equity. It was also undeniable proof that our economy suffered from systemic, potentially fatal weaknesses, and that the subprime mortgages, derivatives, and credit-default swaps that had become the highly profitable darlings of Wall Street were actually toxic.

But before Lehman Brothers, which had already been in decline, did the unthinkable and finally imploded, there must have been a moment when LB executives truly realized that their exposure to mortgage-backed securities was a poison the company could not recover from. And that in the once-venerated company's death, there was still money to be made, even if doing so was essentially pressing a self-destruct button on the world economy.

The film Margin Call takes us inside a lightly fictionalized stand-in for Lehman Brothers called HMS, where a young risk analyst (Zachary Quinto) discovers the math that proves HMS' imminent demise, then follows the information through all-night crisis meetings as it makes its way through the hierarchy until it reaches HMS' CEO, John Tuld (Jeremy Irons, who might be channeling former Lehman Brothers CEO Richard Fuld), who coldly plots a strategy to screw one last round of investors before the company goes bankrupt. Listen to my ReThink Review of Margin Call by clicking on the image below. (Margin Call is in limited release, as well as on Video On Demand and Amazon Instant Video.) 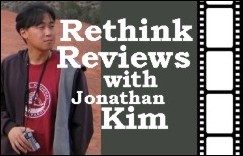 As the great recession drags into its fourth year, it's becoming harder and harder to remember the good old days when Americans still had confidence in our financial system and the banks that formed its foundation. But that faith disappeared, possibly forever, in September 2008 when Lehman Brothers, one of Wall Street's most venerable institutions, suddenly went belly up, triggering a wave of investor panic that would plunge the world's economy into recession. The film Margin Call takes us inside a fictional investment bank called HMS to show what it must've been like within the halls of Lehman Brothers during that fateful 24-hour period before its collapse, as executives slowly acknowledge that not only had they built a bomb that will blow up the economy, but that they could save some money if they lit the fuse themselves and were the first out the door.

Zachary Quinto, who is also one of Margin Call's producers, plays Peter, a risk analyst who gets tipped off by his recently downsized boss (played by Stanley Tucci) that HMS' recent troubles are indicators of something much worse to come for the entire economy. After crunching the numbers and seeing the scope of the looming catastrophe, Peter begins the process of sending the bad news up the hierarchy, first by telling his immediate superior, played by Paul Bettany, who then kicks it up to their boss, Sam, played by Kevin Spacey, whose fake tan and false bravado seem to be a reference to Angelo Mozilo, the disgraced CEO of subprime mortgage provider Countrywide Financial.

As late-night meetings are convened as the news moves up HMS' executive food chain, we paradoxically see an increasing lack of both accountability for and understanding of the financial devices about to sink the economy, ending with HMS' CEO John Tuld, played by a cold-blooded Jeremy Irons, who essentially declares the impending crash his company created to be an act of God, where the only logical option is to pocket as much money as possible by dumping all of HMS' soon-to-be-worthless securities on unwitting buyers, a move bound to trigger the meltdown.

In the 2003 documentary The Corporation, directors Mark Achbar and Jennifer Abbott illustrate how corporations share the same traits as psychopaths, with their total lack of empathy, willingness to hurt others in pursuit of a single-minded goal, and refusal to take responsibility for the pain their actions cause. In this way, Fuld and the rest of his officers embody the corporate mindset that the Occupy Wall Street movement is trying to expunge from our political system. It's a mindset that will always value the wealth of a few over the welfare of many while viewing the victims of their decisions as either suckers, peons, or unavoidable collateral damage.

With its largely confined setting, Margin Call often feels like it might make a better play than a film, and much of the discussion about the impending meltdown is done in a shorthand that assumes you already have an understanding of what caused it. In that sense, if you're looking for a primer on what caused the recession, a documentary like 2010 Oscar winner Inside Job would be a better pick. But Margin Call -- powered by an all-star cast that includes Demi Moore, Simon Baker, and Penn Badgely -- does an excellent job of putting human faces on the perpetrators of an entirely manmade catastrophe.

As all-night meetings stretch into early morning and the clock ticks towards the opening bell, Margin Call will give you a sense of the sinking feeling insiders at Lehman Brothers must've felt as they finally grasped the size and ferocity of the monster they created and were about to loose upon the economy, even as they tried to convince themselves that it wasn't their fault, as they watched the sun rise on a world that they would change forever.