Terms |
Privacy Policy
Part of HuffPost Entertainment. ©2022 BuzzFeed, Inc. All rights reserved.
Crystal Lee Sutton, whose struggle to unionize a North Carolina textile mill became the inspiration for the 1979 film
Norma Rae
,
died last Friday
at the age of 68 after a long battle with brain cancer. Sally Field won the Oscar for best actress for her performance portraying a thinly-veiled version of Sutton. Watch my ReThink Review of Norma Rae here:

In an interview last year with the Burlington Times News, Sutton described battling her health insurance provider for the care she needed.

[Sutton] went two months without possible life-saving medications because her insurance wouldn't cover it, another example of abusing the working poor, she said.

"How in the world can it take so long to find out (whether they would cover the medicine or not) when it could be a matter of life or death," she said. "It is almost like, in a way, committing murder."

Sutton eventually received drug and chemo therapy and underwent two operations. The AFL-CIO took up donations on her behalf and her husband worked two jobs to pay for the care she needed.

When you watch Norma Rae, which was shot in a real textile mill using workers as extras, you can see why Sutton worked so bravely and tirelessly to unionize the J.P. Stevens mills and improve conditions for textile workers. The noise in the mills is deafening, the pay meager (Sutton was paid $2.65 an hour to fold towels), the machinery dangerous, the hours long and sweaty, and the air clouded with cloth fibers to clog the lungs of workers on the production floor. Whether it was preventing injury, sickness or death from dangerous working conditions or preventing the slow slide into poverty, Sutton realized that the fight to unionize was literally a fight for the lives of working people. 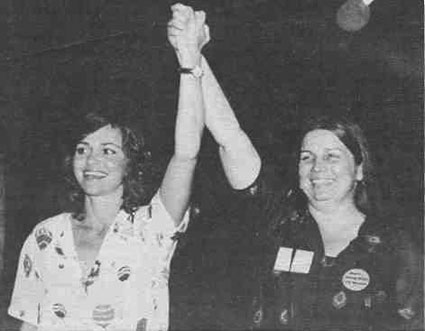 While deaths in the workplace have dropped considerably over the decades, I wonder if that's because that job has been outsourced to the health insurance industry, which has realized that there's a lot of profit to be made from (often preventable) death and suffering. It is now a given that workers should not have to needlessly put their health or lives at risk simply so a company can increase its profit margin, yet that's exactly what the health insurance industry did to Sutton and continues to do on a daily basis.

We should be thankful that Crystal Lee Sutton's struggle to help the working poor has been immortalized in a film as great as Norma Rae for generations to enjoy and be inspired by. Though the struggle to unionize America's workers (and pass the Employee Free Choice Act) is still being fought, maybe now we need a film dedicated to the working sick, who are forced to endure needless suffering because an insurance company won't cover their treatment, and the working scared, who are one accident or illness away from financial collapse. Or we could pass real healthcare reform. That would be the best tribute of all.