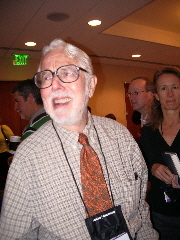 I'd like to recommend the theologian Harvey Cox to all my non-believer friends.

So many of the sophisticated, highly educated people I know labor under the assumption that, in order to be a Christian, a person has to believe - to assent intellectually to - the factuality of traditional Christian teaching.

It seems that the one thing so many of my friends have retained from whatever Sunday schooling they had as children is that they must believe every word of the Apostles' Creed or Nicene Creed.

They don't. That's my opinion. And here's why: The idea of a fixed creed to which a true Christian must subscribe dates back, not to the life of Jesus, but to the fourth century, when the emperor Constantine converted to Christianity and took control of the church.

Constantine saw great possibilities in the popular new religion that was spreading like wildfire across his empire. But beliefs about the nature of Jesus Christ were diverse and often contradictory in that early church. A common religion with a common creed, Constantine reasoned, would help him to unify -- and control -- the many and varied peoples of the Roman Empire. With that in mind, he insisted that church leaders come together and settle on a single set of beliefs.

(Conquering forces that use an ideology like religion to abet their purposes? Check out the recent New York Times story on the alliance between Saudi royalty and the fundamentalist Wahabi Islam at "Saudis Turn Birthplace of Ideology Into Tourist Spot.")

The early Christian bishops complied, and in the centuries that followed - right up into the twentieth century - Christians were taught that, to be a true Christian, one had to believe.

So powerful was the Christian belief in belief, that in some eras, heresy - incorrect belief - could get you burned at the stake.

But now, according to Harvard professor and theologian Cox, the age-old Christian belief in belief is becoming a thing of the past: the Age of Belief is over.

Harvey Cox's ground-breaking The Secular City was a best-seller in 1965. It sold more than 1 million copies. I read his more recent The Future of Faith a couple years ago, and it continues to stick with me. In it, the former Harvard theologian presents fresh food for thought: that Christianity is entering a new era. He calls it the Age of the Spirit.

The Age of Faith.

For the first three centuries of Christian history, Cox argues, the early church was not concerned about creed, doctrine, belief or hierarchy. Theological ideas about the nature of God were not as important as following the teachings of Jesus.

The Age of Belief.

In the fourth century, Constantine asserted control over the Christian church and insisted that everyone in the empire subscribe to a common creed. As a result, until well into the twentieth century, the church focused on correct belief, on doctrine and orthodoxy. For centuries, Westerners assumed that belief - accepting traditional Christian doctrine - was essential to faith.

Age of the Spirit.

Since the mid-twentieth century, more and more Christians have been ignoring dogma and creed and turning toward a more spiritual Christianity - while finding commonalities with other wisdom traditions. Faith and belief are two different things, Cox argues. Beliefs are opinions, while faith - fidelity - is a way of life, a placing of one's confidence in Spirit.

Cox was the Hollis Professor of Divinity at Harvard until 2009, when he retired and turned his attention to religion and science, and Christian-Muslim relations.

As for my non-believer friends -- I hope they'll open Cox's book and free themselves of the burden of belief.

More thoughts on theology at "James Dobson: Bully Your Pet, Hit Your Kid. Make Them Obey You -- and God."

A version of this story first appeared on BarbaraFalconerNewhall.com, where Barbara riffs on life, family, books, and her rocky spiritual journey. Her newly released interfaith book is "Wrestling with God: Stories of Doubt and Faith."