Today's populist urbanism celebrates the rise of the city, whether in sound bytes on the Daily Show, by census or science. Along the way, some note nostalgia when the long-time "Mom and Pop" store closes and formerly distinct urban places adopt conventions from elsewhere.

Another facet of urbanism comes from that indescribable human dance of history, people and place that occurs when we simply like what we see. It is exciting when something resonates, such as purposefully preserved fragments of what was--more than Colonial Williamsburg or Sturbridge--but places which take us back to a sustainable set of circumstances with a simple, irrational gestalt: to live there for a year rather than a day, or to take the places home. 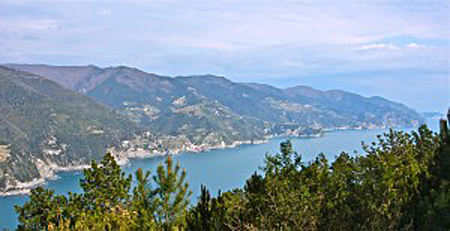 What if there were five neighborhoods connected by a trail? Or better yet, as illustrated from the Cinque Terre in northwest Italy, five towns, all self-contained, but symbiotic, micro-economies also connected by footpath, rail and water? What if they all had the magical amenities of street, square and housing within, terraced agriculture and spiritual retreats in the near-hinterlands?

The Cinque Terre towns of today have, in reality, evolved as a designated world heritage site and a national park with mechanisms to preserve and protect the cultural landscape (including often-abandoned hillside vineyards), and the internationally noted "look and feel" of interconnected towns.

Such regional "artifacts" raise the real question--need such places be facade-based shells, largely touristic, dominated in the summer by strangers rejoicing not just in local wine and pesto, but, ironically, the lack of cars and the wonders of a small-scale, interurban trek?

Writing elsewhere last year, I addressed topics of placemaking from ruins, learning from hill towns and chasing utopia. But more than such references, can the "we like what we see elements" be the stuff of daily life rather than a vacation? Similar sentiments dominate comparative blog and article references in recent months by Mssrs. Benfield and Epstein, who evoked ongoing work by Mahron and Mouzon, as well.

Such sentiments are worth repeating.

Over and above summer jaunts--and shipping home wine and pesto to remember and share--we should all bring home the gift of urban ideas. This gift honors not only the rising tide of urbanist ideas, but also the spirit of implementation.