As the record industry started to dry up and die and the major labels were sort of crippled and starving -- it was a land grab. It was, "I just fired a third of my staff, and I am going to offer you half the money I would have last year. But I am going to give you a shittier deal on records, plus I want a piece of touring, merchandising, and publishing for which I have no infrastructure, I don't really know what I am doing, and I am probably just going to get in the way. But I deserve it because my business sucks." -- Matt Drouin, Manager of the band Metric 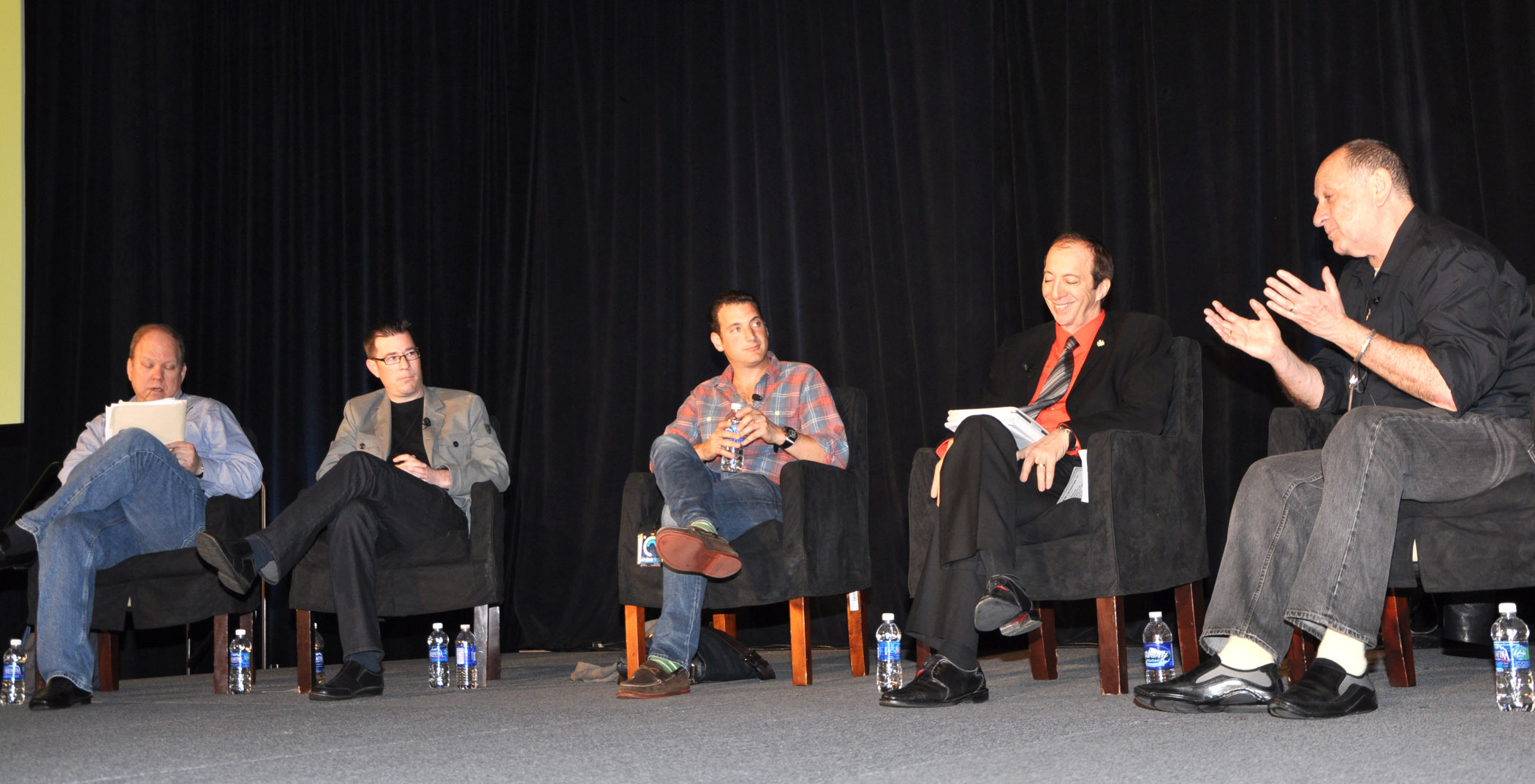 Music may be between a musician, her guitar, and her fans: but when you introduce licensing, streaming audio, online campaigns, social media, the Cloud and many artists gravitating toward becoming their own label, you may need a four-wheel drive to plow through the congestion of left brain thought required to take the music to the end user.

Luckily, Berklee College of Music and Harvard's Berkman Center are among the best positioned entities to understand the musical ecosystem paradox as of late and they collectively stuck their neck out to create the first iteration of the Rethink Music Conference. Attendees, who were mostly leaders in the field, flocked in from record labels, copyright offices, tour buses, congressional offices, recording studios, venture capital firms, streaming content providers, and Cloud management firms. They listened and deliberated with the concept of actually coming up with viable ideas for the future of music -- and were urged not to pontificate for pontification's sake. 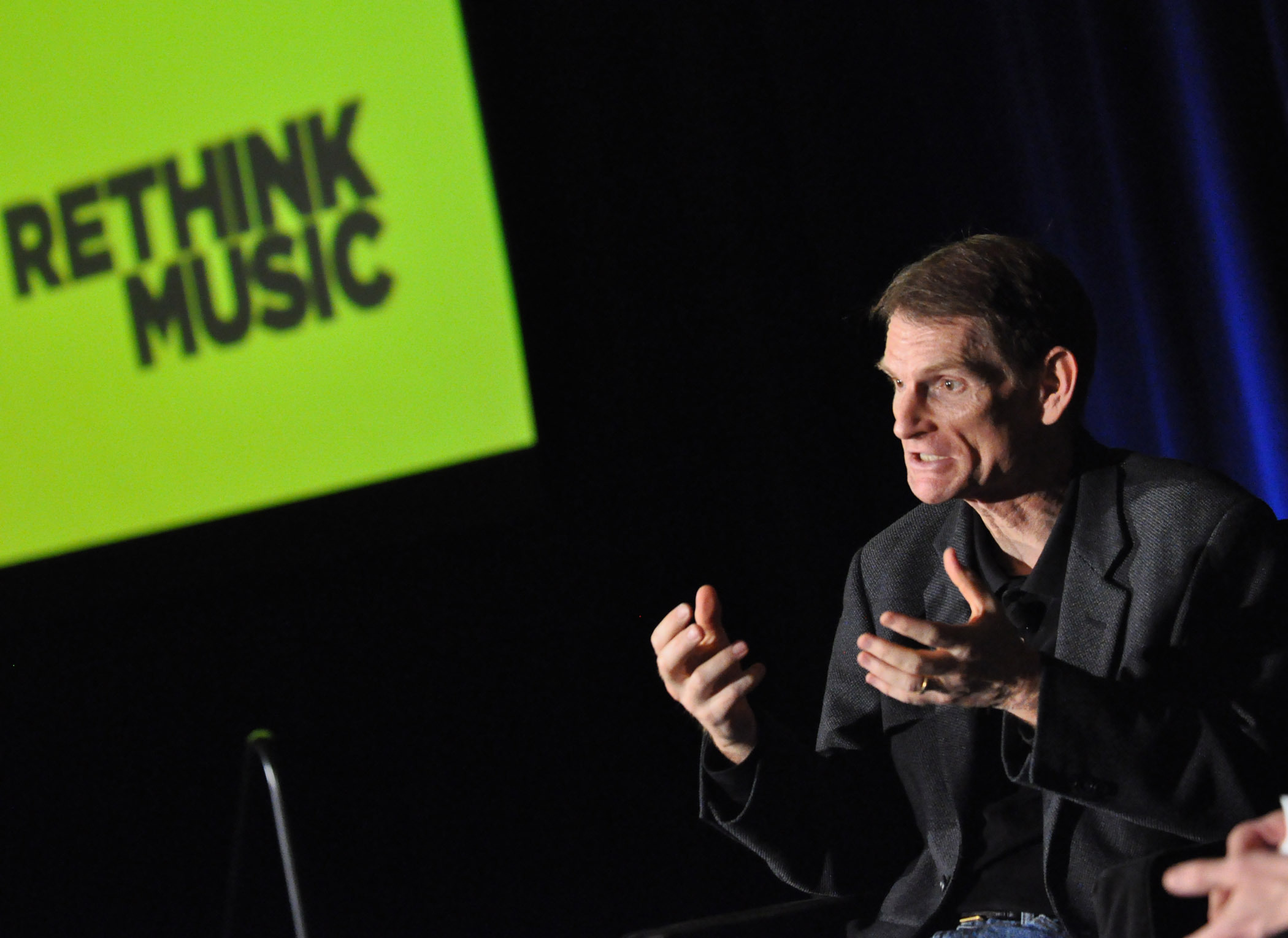 This conference went well beyond the woe-is-me-our-intellectual-property-rights-have-been-illegally-taken model -- that is so 2001 -- it is 2011. Ben Folds told me he learned a decade ago that it is counterintuitive to be angry at his fanbase, so he did what so many artists have subsequently done -- he relinquished caring how his fans got his music and just concerned himself with good, sound musicianship. Following Folds' sentiments, Emily Haines of the band Metric said she also stopped concerning herself with how fans obtained her music -- but she noticed an unusual juxtaposition: as Metric increasingly gave songs away for "free" they saw an increase in ticket sales, merchandise sales, specialty record sales, and tour bookings. Metric quickly learned that "giving" across the digital divide can also correlate with "increasing" earnings and ultimately empowering the artist. If you buy what that last sentence was selling, we may be looking at the most empowered generation of musicians this planet has ever seen.

Not everyone thinks the new digital "isn't life rosy" free concept is the best power plant for a viable career path. Most notably a good portion of the older, more established artists who experienced the "golden age" of music royalties speak out on the new system of "free." Mike Mills of R.E.M. is one such artist and told me, "I believe in intellectual property rights -- but it is like trying to hold the air -- you can't do it. I think if you want to give your music away for free that is fine -- however I do think if that is how you have chosen to make a living, then you should be paid for the work that you do. It just annoys me on principle that so many people take artists' labor for free when they would never think of working for free in what they do as a profession."

Regardless of the turbulence with the digital content, the tenure for this Boston-based meeting embodied optimism for how creativity can be better accentuated through digital means. Damian Kulash of the band OK Go spoke of the new digital space and the relation to the artist and said, "It is seeing these new digital spaces as valid creative spaces. People tend to look at the Internet as something that can help realize efficiencies of commercialisms. To me, digital is a huge annex to our lives -- to the space in which we all live -- making art in that space is different than it was ten or twenty years ago." 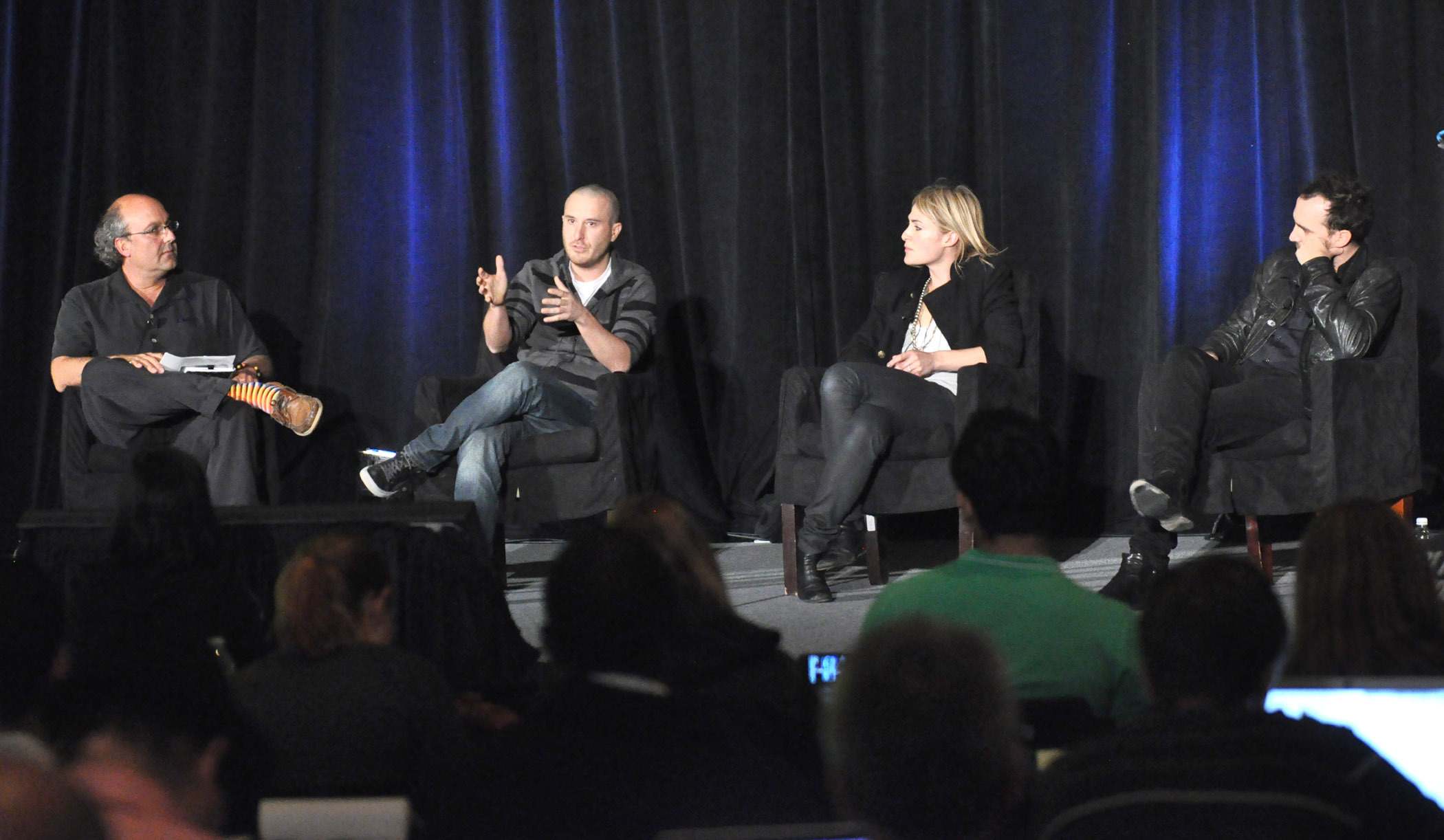 There is a pretty wild west non-monetized artistic community of call and response with these Internet memes and songs. Optimistically it takes things back to the basics. And hopefully younger artists have a better understanding that your stuff just needs to be good. Number one: write good music. Number two: play it well -- make people want to hear it. And get your priorities and thinking away from: find a label, get famous. Get in front of people, actually work on your shit. Make something that people will really want and then you are actually empowered. It used to be that even if your material was great, that didn't empower you. Now your material does literally empower you to bring money, fans and success.

The concept of "empowered artists" was a main theme for this specific meeting of the minds. Perhaps some industry players saw the empowering ability of digital coming -- but most industry personnel were blindsided. Neil Jacobsen, Senior VP of A&R, Interscope, said, "If you would have told me ten years ago that a site like Youtube, that was going to pop up and flip the content delivery ideal on its head, I couldn't have even conceived it." Joe Kennedy, CEO of Pandora, talks of how digital media weeded through the players in the music industry by saying, "Digital music is tough turf -- the digital roadside is littered with casualties."

Jacobsen continued, talking about one of the buzzes of the meet up, the Cloud concept, and said, "I know things like this Cloud computing that are going to be a game changer again -- but it comes back to the same thing. If you have great music the Cloud will work for you, if you are a borderline musician the Cloud will crush you." Adam Parness, Director of Music Licensing for Rhapsody, thinks the concept of the Cloud as more of a buzz word, and not necessarily a new, game-changing concept. Parness feels his firm, Rhapsody, has proven this service for the last decade and says, "it's not like it is coming, it has been here for quite a while. Rhapsody has 11 million songs. I think the industry is starting to really get the value of the access model. Digital downloads are starting to go out -- you are not seeing the year-over-year growth you were seeing in previous years. I think with the technology, this access thing has really become a reality."

Another game-changer reality readily addressed at this conference is what happens when music truly goes social. Up to this point a lot of the services selecting music for listeners have utilized algorithms in a similar vein as the Amazon model "if you like this, you will like this." When friends can curate musical content for friends, a whole new concept of musical exchange comes to fruition. This concept is coming down the pipe pretty quickly. The industry is placing bets and filling the sandbags as we speak for the flood that will ensue. The common sentiment of this social media direction of music is that the access model seems well positioned for the battle.

TO LABEL OR NOT TO LABEL

Amanda Palmer spoke of her relationship with the record labels by saying, "In 2003, our record label really did give us a strong launch and gave us really important promotion we would not have been able to create ourselves. But that would not be the case for artists in 2011." Listening to all the conversations transpire regarding musicians being empowered by their own means and having it all about the songwriting, it is easy to interject that the labels are an unneeded ancillary. But regardless of the direct digital imperatives, the labels have massive clout and a definitive purpose. 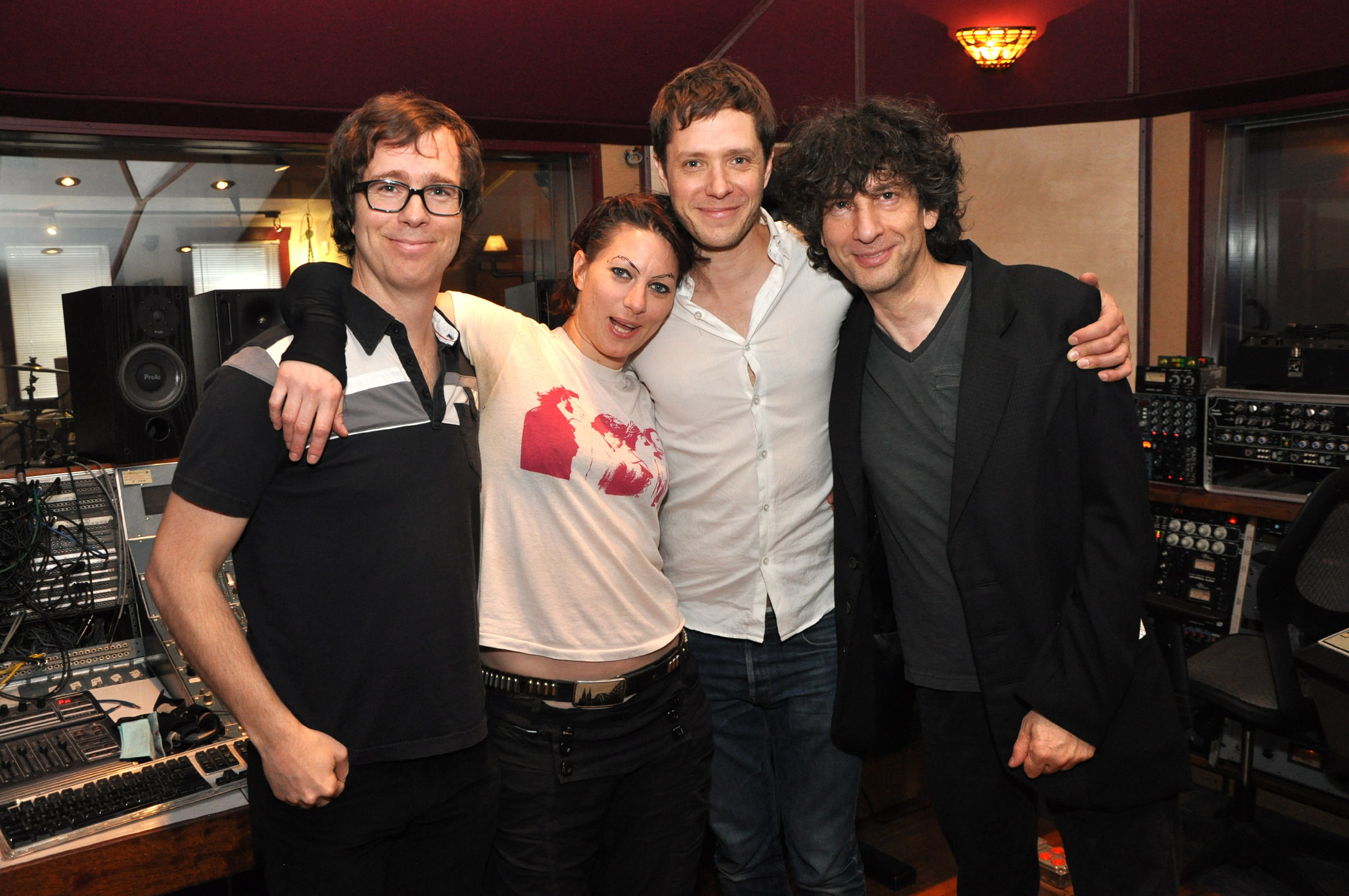 Interscope's Jacobsen says he understands the self-funded campaigns bands are undertaking. He says, "if you are already a superstar, and want to put out your own record, I get it." Jacobsen continues and talks of the power he feels his company can still offer by saying:

There is a value that comes with [Interscope's] ability to focus an international worldwide global marketing campaign. Just in Europe you have five countries that speak five different languages, that have five totally different media bases and you have 28 radio stations, completely independent of each other. Just because you are on the play list on NRJ France doesn't mean you are going to be on Heinz Live in Germany or Radio 1 in the U.K. You need people on the ground to actually work it. You need a central organization.

Ben Folds, talking of labels, says, "I do like record companies. They still play an important role and they will always and should always exist. But they were ripping a lot of people off. You can ask the Dixie Chicks how much money they made for selling 13 million albums. And they will tell you the answer and you won't believe it." Emily Haines continues the conversation and says that had Metric wanted to be the Rolling Stone two-page-spread glossy sort of band they would have had to seek out a major label deal, which they received and turned down. But instead they knew their fanbase were always going to be looking away from Billboard's charts and they wanted to take their message there. Haines also knew that by putting their eggs in their own basket they could sell half the albums and post a substantially higher profit. 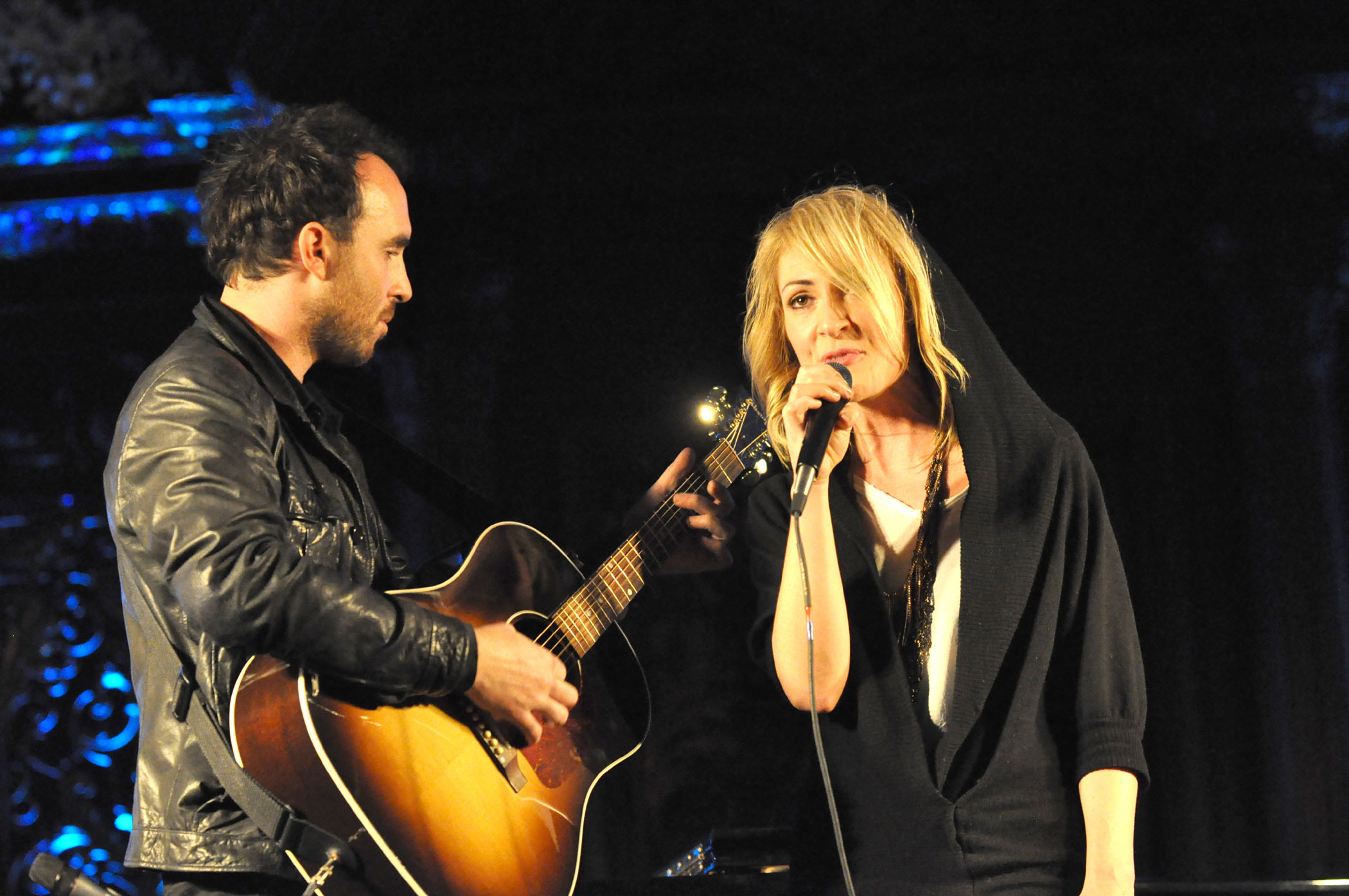 Jimmy Shaw, lead guitarist of Metric, continues, and says, "playing David Letterman is a key thing to do, but it doesn't actually sell you any records and I think there is a lot of that going on in the old school. It is something -- but it doesn't actually do anything. The important thing for us was we were always way more interested in the actual fan."

The complete picture of the music industry, with Berklee College of Music and Harvard's help, is optimistic. It is empowering. It is a little more honest. It is back to the songwriting basics. It is using digital to cut some of the baggage and using the available media for the most important thing of all --connecting the musician to the fan. Emily Haines speaks of the modern multi-tasking, digitally-integrated musician and says:

I think it is so important that musicians can empower themselves to not be children in the process. I think sometimes it is counterintuitive -- because to be creative is not to sit around and think about numbers and deal structures all day. My thinking is you are going to have to deal with it eventually -- when you wind up having to sue your record company or sit around with lawyers. If you can develop the skill to separate your work, that is key. We take care of a lot of this stuff, then we go in the studio, turn off our phones, and just forget about it. But the oblivious musician is a very sad story to me and is in a position of being exploited.

As I concluded my interview with Metric, I thanked them for turning me on to their musical abilities. I told them that I would go home and download their full music catalog and that they probably would not get a dime in royalties so I put $10 on the table and said that this would help me to feel better about the downloading I planned to conduct. They smiled, left the money on the table and said they knew they would get the revenue from me in another stream, on another day.

I tweeted their concert footage.

I bought a t-shirt.

I can't wait to see them live. 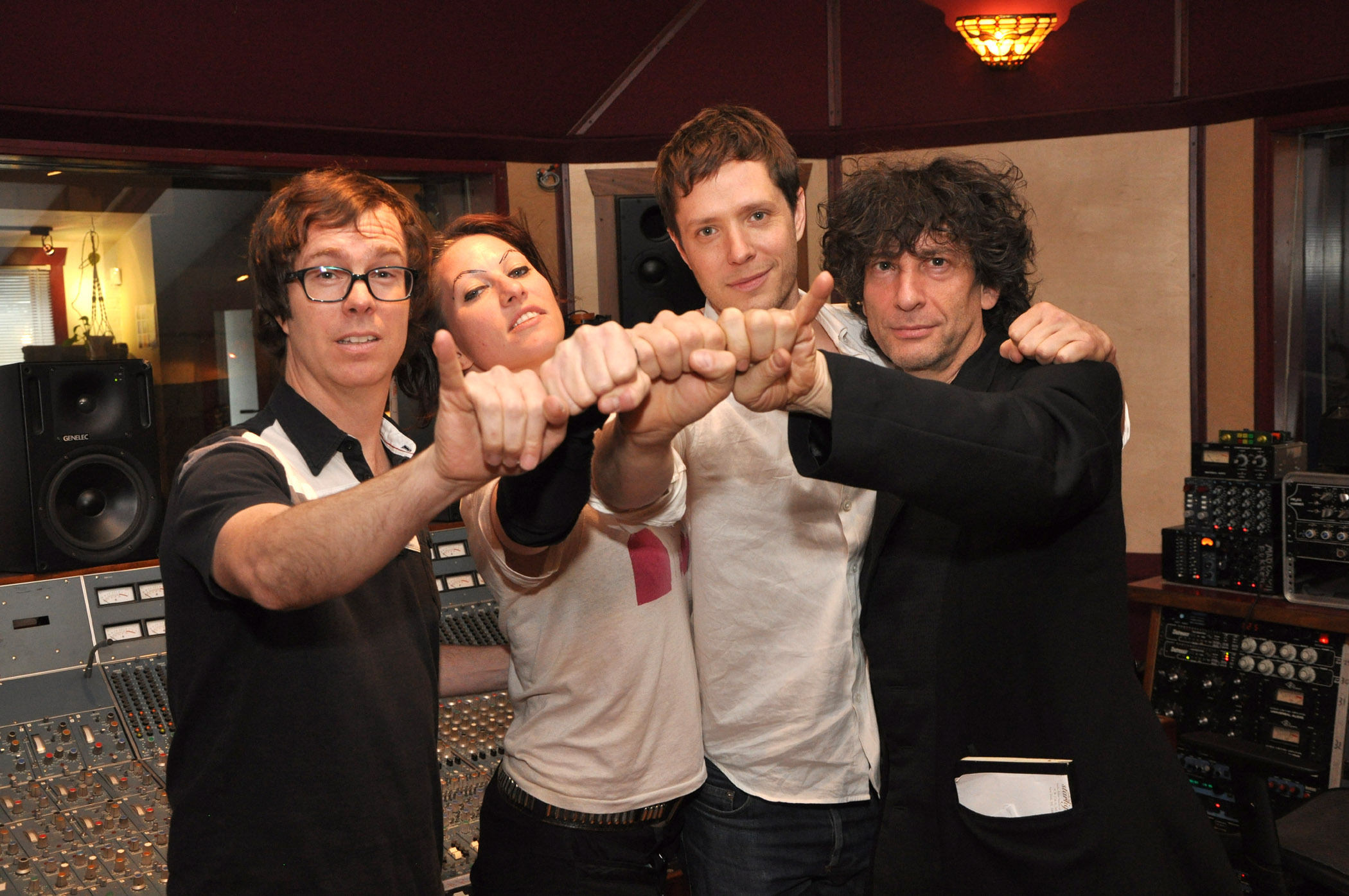