An initiative that's on this November's ballot in Montana, if approved, will place Montana in the fore of public land management.

Montana, the fourth largest state in the country, is known for its remarkable natural resources. Glacier National Park is a jewel. Montana's rivers and streams feed both oceans and three of North America's major river basins. And the state hosts the greatest diversity of mammalian wildlife.

And this fall, the state is trying to establish itself as a leader in public land management. An initiative on this November's ballot seeks to significantly restrict trapping on public lands.

If the initiative passes, this is a big deal, not only because Montana has a lot of public lands--one third of the state or 50,000 square miles--and a long trapping tradition, but it will punctuate the growing shift to keeping state public lands safer for everybody.

To date, California, Colorado, Washington, and Arizona have significantly restricted or banned trapping on public lands for just that reason, and because there's a growing consensus that trapping causes unnecessarily cruel and unusual suffering.

But the ballot initiative is by no means a clear cut issue because many opponents believe it will infringe upon personal liberties, further fuel the expansion of big government, hurt individuals making a living from the skins of trapped animals, and is part of a broader movement seeking to ban hunting.

The Missoulian, the state's third-largest newspaper, in a recent editorial, concluded "Montana's public lands are big enough to accommodate everyone, and we should all work together to find a way to share the landscape." It recommends voting against the initiative.

Voters need to distinguish between facts and fiction in deciding whether restricting trapping for private profit on public lands makes sense.

Backstory
Though commercially motivated, trapping in Montana is managed as recreation. For a $28 license, trappers can kill furbearers (beaver, otter, muskrat, mink, marten, fisher, bobcat and swift fox). Quotas are set for bobcat, fisher, otter and swift fox, but the majority of species, can be trapped without limitation.

Trapping wildlife--badgers, raccoons, red foxes, as well as predators, like coyotes, weasels and skunks--is minimally regulated. Trapping such animals does not require a license, and trappers can kill as many as they like. Because traps catch anything that walks into them, they maim and kill thousands of other non-targeted animals every year. Trappers have reported killing an average of 50,000 animals annually for their fur over the past decade. The actual kill number is likely much higher.

There are recommendations for how frequently traps should be checked. But the reality is authorities don't meaningfully enforce these rules. Accordingly, many trappers do not check their traps with any regularity. The state also doesn't require signage indicating where traps are set.

While hunters may find their rights protected indirectly by the second amendment, there are no constitutionally guaranteed rights to trap. Accordingly, this matter is regulated by state and local authorities.

The reason California, Colorado, Washington, and Arizona have already restricted or banned trapping on public lands is to enhance safety, promote tourism, and reduce wildlife suffering.

Over the years, groups in Montana have failed to collect sufficient number of signatures to get an anti-tapping initiative on the ballot. However, this year, Montanans for Trap-Free Public Lands, based in Missoula, secured more than 34,000 independent signatures statewide to enable voters this November the right to decide if they want to stop trapping on public lands.


What I-177 will Do
Simply put, State Ballot Initiative 177 seeks to restrict commercial and recreational trapping to private lands. That still amounts to two-thirds of Montana.

Connie Poten, Secretary and Coordinator of the ballot initiative, says if I-177 is passed, it would eliminate an extensive network of deadly devices that are spread randomly across millions of public acres.

"Special interests shouldn't trump the right of everyone to enjoy our public lands with their companion animals," says Poten. "Steel traps and (so-called) snares are like landmines left behind after war. When caught, people and their pets suffer significant trauma. Many pets have died."

She also claims the initiative will also reverse the present trend that's been pushing rare and sensitive species to extinction, caused by centuries of indiscriminate trapping across public lands. Trapping is a leading cause for the decline of lynx, wolverine, marten, swift fox, and fisher.

Local physician, Dr. Tim Provow, who's President of the ballot initiative committee, explains I-177 would greatly reduce "a form of killing that involves days of pain, starvation, even self-amputation, before animals succumb." He argues that if this form of torture occurred in any other context, those responsible would be accused of criminal animal cruelty.

He points to reports by the National Academy of Science, which acknowledge animals (especially, but not limited to, mammals) feel pain and that it's incumbent upon researchers who rely on laboratory animals to mitigate their suffering.

I-177 would enhance water preservation and management, according to Dr. Clare Beelman, a former assistant professor of biology and Co-Coordinator of the initiative. "By damming, beavers and other semi-aquatic-animals," Beelman explains, "help preserve critical water basins." She cites a BBC report that found the work of just one beaver is estimated to be worth $120,000 in terms of water management. Loss of these animals, she concludes, is akin to collapse of bee colonies and its effect on agriculture.

The initiative, according to Beelman, would not restrict trapping for reasons related to public health and safety, protection of livestock and property, and for scientific and wildlife management purposes.


A leading state group of hunters, fishermen, and trappers, Montana Sportsmen for Fish and Wildlife, still argues trapping is one of the most effective methods for controlling wolves, coyotes, and other predators that threaten ranchers' concerns. Given the initiative's specific caveats, it's difficult to see how ranchers would be harmed by the public land restriction.

The group also claims that "animal rights fanatics are raising hundreds of thousands if not millions of dollars into a media onslaught of duplicity . . . as prelude to abolishing hunting, trapping and fishing." Again, it's difficult to see how the group comes to this conclusion. The initiative is exclusively focused on public lands and trapping. And according to the folks promoting the initiative, they are working on a shoestring budget and will likely end up in debt.

The Marias River Livestock Association promotes the belief that passage of I-177 will cost taxpayers more than $400,000 a year in lost license revenues and the need for the state's Department of Fish, Wildlife, and Parks to hire new personnel to track and count wolves--work that the Association says trappers are currently doing for the state.

When the Department was initially asked to assess the cost of restricting trapping on public lands, it concluded that it would lose only $61,000. The additional cost is related to counting wolves.

Since trappers argue they actually trap on only a small portion of public lands--which is understandable given how remote such lands can be from where people live--the accuracy of the current way of counting wolves comes into question.

The Association also cites the long "cherished family tradition like hunting, fishing and camping" it wants to sustain by voting against this initiative. These activities do not appear threatened in any way by I-177. The initiative doesn't threaten trapping on two-thirds of the state that's private--that's 100,000 square miles.

The Missoulian admits the trapping initiative is grounded on legitimate "concerns about the collateral damage caused by this particular method of wildlife harvest." And the paper says, "there are places where it makes no sense to allow trapping."

By agreeing the public should be worried about safety on public lands, The Missoulian's argument against I-177 reveals the contradictions of its own logic. It's likely that many voters may feel the same confusion about deciding which way they should vote.

Ultimately, the case for I-177 is based on whether public lands should be managed for the public without putting any soul at undue risk. Given that two-thirds of the state is private, such a prohibition doesn't appear to significantly restrict trapping.

"When a bobcat's leg gets caught in a steel-jaw leg hold trap, it immediately causes swelling, lacerations and bone fracture," explains Applebury. "With trapping occurring during winter months, loss of circulation will cause the limb to freeze within several hours. The limb will then turn gangrenous."

"During this time, the animal will twist and try to run, causing joint dislocation and damage further up the leg."

"For those creatures who refuse to remain trapped, the bobcat will start gnawing at its leg. Once through the soft tissue, it will bite through its own bone until it snaps.

"For those creatures that do escape with a bloody, amputated limb, infection will occur soon after. If the animal doesn't succumb to a predator from which it can no longer escape, it will likely die of sepsis within a week."

"It may be worth considering," concludes Applebury, "how we as a society demand executions of convicted murderers be done humanely. It's troublesome that for innocent wildlife, when their slaughter is deemed necessary, society can't extend that basic standard." 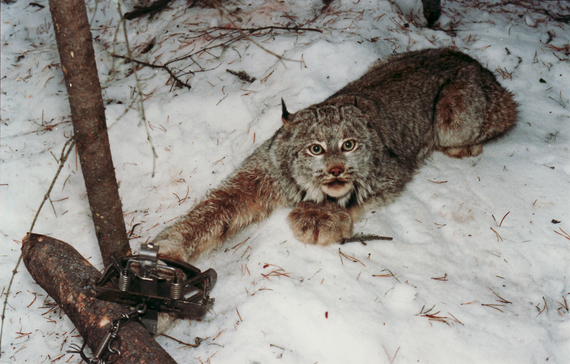 Eric Uhlfelder is a veteran financial journalist who earned a National Press Club award for a story he wrote for National Geographic on airplane-bird strikes and the promise of avian radar.