Medellín may not be the first place that springs to mind when you're thinking of your perfect overseas retirement spot ... but perhaps it should be. 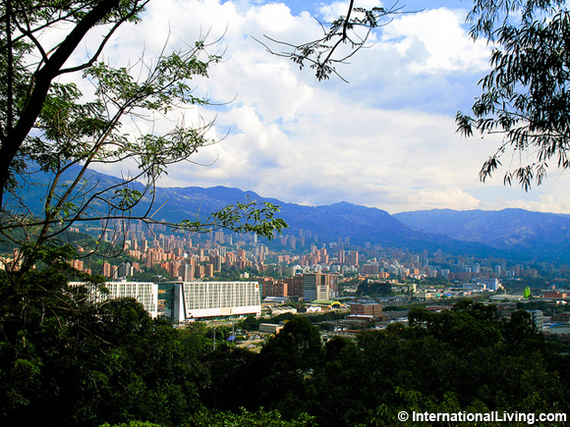 Medellin, Colombia
At least, that is, if you're looking for a clean and vibrant culture-rich city that's just a short flight from the U.S., and with perfect weather and an overall low cost of living. Because that's exactly what you'll find in Medellín, Colombia's second-largest city (and third most-visited, after Bogota and Cartagena).

Known as the City of Flowers, thanks to its eternal spring-like climate, Medellín -- with a population of 2.5 million people -- is a city also known for its music, museums, nightlife and friendly people.

It's the capital of Colombia's department of Antioquia, one of the country's famous coffee-growing regions. It's also the center of Paisa culture that stems from the early Spanish settlers who developed a distinctive identity, in part thanks to their relative isolation in these mountains.

The Paisa's reputation as traders, partiers, and lovers of music and soccer color almost every aspect of life in Antioquia and Medellín. It was the Paisas that made the Colombian coffee industry the success it is today. (Juan Valdez himself, the fictitious coffee farmer that represents Colombian coffee, is a Paisa.)

But Medellín's economy is based on more than coffee. It's a major business and financial center. Industries include textiles, insurance, food processing and distribution, construction, and banking.

Physically, Medellín is a hilly city that may remind you of San Francisco but at an elevation of about 5,000 feet, the weather here in the Aburra Valley is far better than San Francisco's. The climate is just about perfect year around. Most rainfall occurs in April, May, and November, and the average temperature in the valley nearly every day is about 72 F. Perfect. 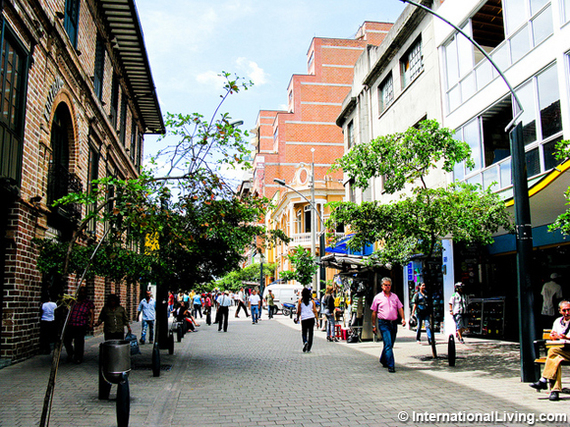 Thanks to this ideal climate, you'll find shady parks and plazas everywhere in the city that you can enjoy year-round. There's also a zoo, a botanical garden, and a huge national aquarium featuring species from Colombia's Amazon region.

Every other week, it seems, there is a festival of some kind in Medellín. The biggest and best known is the flower festival in early August. There is also a huge light festival and display at Christmas time. There are food and agronomy festivals, book and theater festivals, a jazz festival, and more.

And the city is justly proud of its Museum of Modern Art with dozens of paintings and sculptures by Colombian artist Fernando Botero, whose art is collected and displayed around the world.

If all you know of Medellín is its troubled past, you're in for a nice surprise.

If you still associate Medellín with the Pablo Escobar days of the 1980s, you should know that those days are long gone. Today, it's a progressive city, setting a world standard for urban development. In 2013, it was chosen by The Wall Street Journal as the most innovative city in the world, beating out Tel Aviv and New York.

Make a visit to Medellín, and you'll find it's full of surprises. It's one of the prettiest, friendliest, and most modern and technologically advanced cities in Latin America ... making it an excellent choice for retirees looking for a perfect-climate city with all the most-desired amenities.

For instance, Medellín's José María Córdova International Airport, 45 minutes away in the city of Rionegro, is the second-largest airport in Colombia after El Dorado International in Bogotá. You'll find several direct flights to Medellín from the U.S. and other points in the Americas and Europe.

There are a number of world-class hospitals here, too, with specialists in all areas. ISO-certified facilities in Medellín include the Pablo Tobon Uribe Hospital, Clinica Medellín, Medellín General Hospital, and many more. You'll find top-quality clinics and healthcare facilities in each of the city's neighborhoods.

And, of course, there are all the shopping opportunities you'd expect of a modern metropolis. You'll find half a dozen large malls, from budget minded to upscale. Ultra-modern supermarkets are abundant, too, but as with all Latin America cities, you'll always have a small tienda, or mom-and-pop shop, in the neighborhood.

One of the attributes we most admire about Medellín is its young, vibrant feel. There are several universities here, including the University of Antioquia and National University, considered as two of the best universities in the country.

It's a city also known for its nightlife, and the entertainment options are countless. Entire neighborhoods are given over to cafés, bars, discos, salsa clubs, and nearly every other type of entertainment you can imagine. The most popular nighttime hotspots include Parque Lleras, the Super Club District, Las Palmas, and Barrio Colombia.

There are many great neighborhoods to make your home.

If you decide to retire to Medellín, you'll find dozens of different neighborhoods to choose from, and each has a different atmosphere and feel. Expats have long favored the safe, upscale neighborhood of El Poblado that hugs the green mountainside and where you'll find tree-lined streets and shady parks. It's a thoroughly modern area of the city, and well stocked with restaurants, bars, stores, and residential options.

But Medellín is a big city, and other neighborhoods have similar offerings, and often with a lower price tag. Neighborhoods for good living include Belen, Laureles, Envigado, La America, Rosario, and Sabeneta.

Note: We've written in recent weeks about the strength of the dollar against the weak Colombian peso. If you're in Medellín these days with dollars to spend, you'll find everything bargain priced, from real estate to food to medical expenses and on and on...

And don't worry about needing a car. Making your way around the city is easy thanks to one of the most advanced public transportation systems in the Americas. The Medellín Metro was inaugurated in 1995 and runs the length and breadth of the city. It even includes a cable car that serves neighborhoods high up on the slopes of the valley. There's an efficient bus system, too ... and taxis are readily available and affordable.

As with many other potential expat destinations, your cost of living in Medellín is largely in your own hands and depends on how you choose to live. Right now, the price is right in Medellín.

But more than just a low cost of living, Medellín makes sense from many angles. It's an up-and-coming international retirement destination with a lot going for it.

Related Articles
My Time Is My Own In This "City Of Eternal Spring"
Yoga, Fresh Coffee, and Champagne in Medellin, Colombia
Good Health and Culture in Bogota, Colombia