Woke up, it was a Chelsea morning, and the first thing that I saw
Was the sun through yellow curtains and a rainbow on the wall
Blue, red, green, and gold to welcome you, crimson crystal beads to beckon

Oh, won't you stay
We'll put on the day
And we'll talk in present tenses

I wasn't in Chelsea when I awoke this morning but Lisbon.

My brain's so foggy with jet-lag, though, that, when I opened my eyes, I wasn't sure at first where I was.

On the wall across the room from where I lay, I saw a rainbow of light sneaking in from the crack between the big wooden window shutters, and Joni Mitchell's song came to mind.

I stood up, remembered I was in Portugal, and pulled open the shutters to let the bright morning Lisbon sunshine fill the room.

Fortunately, without realizing it, we've booked ourselves into a hotel that's just a half-block down the street from Joao's office, a prime location in Lisbon.

We're in the heart of Lisbon's business and banking district, in a building that dates back 300 years at least. Other buildings up and down this tree-lined street are older. I'm at home here. I'm most comfortable in cities and structures with long pasts.

Lisbon's past is long indeed. This city on the Tagus, one of the oldest in Western Europe, was originally settled as a Phoenician trading post. It was in the 15th and 16th centuries, though, that Lisbon flourished. Awe-inspiring landmarks were constructed during this Golden Age of Discovery -- the Jerónimos Monastery and the Tower of Belém, for example, and, on the waterfront, the Praca do Comercio.

Stepping through the triumphal arch onto this immense plaza, Lief and I paused without meaning to. The enormity of the space and the height and grandeur of the structures on three sides around you almost take your breath away when you face them for the first time.

"Imagine what it must have been like to be here, standing on this spot, 500 years ago," Lief said, looking slowly up, then down the waterfront before us.

From that spot, 500 years ago, Lisbon carried its culture to the four corners of the globe, colonizing Asia, South America, Africa, and the Atlantic islands, and then it carried back from these far-flung territories great wealth, much of which was invested in the betterment of what became one of the most glorious cities of its age. 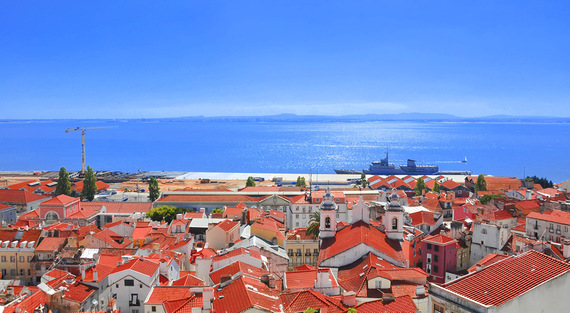 Lisbon became Lisbon thanks to its strategic geographic position at the mouth of the Tagus River. According to a popular fado, Lisbon has always been in love with her river ... because the river is the city's lifeline to the sea... and Portugal very much identifies herself with the sea.

"We have a word in Portuguese," a new friend here, Miguel, told me today, "that doesn't exist in any other language as far as I know.

"The word is saudade. It means a longing for, a missing or a yearning for something. It's a noun, not a verb, and its meaning is born from the feeling of a young wife for her husband sailor long at sea."

"Fado is our traditional music, but it is also our destiny. It is not good, it is not bad. It is simply the way it is... the way your life is because of the choices you have made."

"Yes," Miguel explained. "Saudade is the fado of the woman who has chosen to marry a sailor. It comes with the territory.

"Most of the world looks at Portugal as the edge of Europe," Miguel continued. "We Portuguese look at the world map and see ourselves right at the center ... at the heart.

As I'm getting to know it better, I'm realizing that Portugal is a small country with a colorful history and a big romantic heart.

Lisbon, which I'm becoming acquainted with for the first time this trip, is a noble and elegant city whose centuries-old, pastel-colored stone structures are bordered by jacaranda trees and set off by formal gardens and parks with elaborate fountains. Roads, walkways, and pavements are laid with small cobblestones in contrasting colors to create elaborate patterns and sea scenes that are like works of art, almost mosaics.

From her early-morning rainbow on my bedroom wall to her winding patterned cobblestoned streets, Lisbon is getting under my skin. I feel an attachment starting.

Lisbon has a lot to offer the visitor but hasn't historically been a major tourist destination compared with other European capitals. This appears to be changing. In 2015 Lisbon saw more than 3 million tourists.

With parks, gardens, museums, palaces, significant architectural landmarks, the river, the ocean, and all that history, Lisbon should be on everyone's Grand Tour list. All those amenities also make this city a great option for living, which is why it is attracting more and more expats and retirees, not only from the U.K., whose pensioners have recognized the appeals for decades, but also from across Europe and increasingly from across the world, including China and, most recently, North America.

While I've been entranced by Lisbon's romantic history, Lief has been focused on understanding the city's present-day real estate market. Values are up 20 percent over the past year in certain districts ... and they continue up.

"As a result," Joao told us, "some sections of the city are over-priced in my opinion. These are the areas where everyone has been focused. There is only so much inventory, and now buyers are fighting over it. I say leave those areas alone for now."

The opportunities for real estate investment in central Lisbon right now are many, varied, and compelling. This is a big area made up of many distinct neighborhoods.

The heart of downtown and a key tourist zone is the area inland from the Praça do Comércio. Just west of here is Chiado, a high-end neighborhood. Baixa is a commercial district with shop-lined streets.

Lief and I particularly enjoyed the area around Jardim do Principe Real, which we found charming, a place we could see ourselves spending time long-term.

Distinct neighborhoods, each with its own look, feel, and character, but all interesting as locations for investment, both short and long-term.

With so many areas of opportunity, your challenge as a property investor is narrowing your search zone. If you're looking for a great value, focus on areas outside the "best" neighborhoods -- though it is still possible to find a decent renovation project for a great-undervalued price, even in those top districts. I don't think this will be true for too much longer. Real estate in Lisbon continues to build momentum.

"I know one section of the city, for example, on the river that has a great deal to offer but where values are still very low because so far no one has been paying any attention," Joao asserts, "I'll take you there tonight for drinks..."

Original feature: The Romantic Past And Promising Future Of Lisbon, Portugal

Portugal Is The Total Package For Retirement and More

History And Culture In Lisbon, Portugal

Here's Why Tourism In Portugal Is On The Rise