I'm relieved that our country's taken a first step in getting a grip on health insurance for all, but we're sunk unless we can now get a grip on our health. With diet implicated in much of our nation's disease burden, it makes a lot of sense to reverse the forces that have turned food itself into a national health threat.

That's why I'm thrilled today, March 31, to take part in the launch of a national campaign to retire Ronald McDonald, who for almost fifty years has enticed youngsters into eating habits with horrific life-long consequences.

Did you know that one in three American children is now predicted to be stricken with diabetes?

McDonald's targets the most vulnerable among us- our kids. We need to stand up for them and target McDonald's- arguably the company most active in marketing unhealthy food directly to children.

I hope you'll go now to Retire Ronald and stand up for kids and help end these practices. Our kids need us. At the press event, I'll be with my three-year old granddaughter, Josephine, as a reminder of what's at stake.

We know Ronald McDonald is everywhere. By 1998, almost 89 percent of kids younger than eight were visiting McDonald's at least once a month. And since, the company has said its goal is 100 percent, and has boasted to its shareholders about "[a] slew of new promotions...targeted at kids as young as two." Former Vice President of Marketing R.J. Milano does not mince words. He's said: "I'm going to own every kid transaction out there."

Why is this a problem? Because it's not about reaching adults, whom we trust to make decisions -- good or bad -- for their bodies.

Ronald is about targeting kids.

Why kids? For starters, kids under twelve command up to $50 billion in direct purchasing power, and influence a total of $670 billion in family purchases. McDonald's knows that the surest way to parents' wallets is through their children's stomachs.

The more cynical answer is that kids are the perfect advertising audience: Very young children don't even know they're being marketed to. Plus, brand loyalties created in childhood persist into adulthood.

Children aren't just little adults. As their minds are still forming, they are more impressionable than adults; and therefore more vulnerable to marketers' manipulation. Children under the age of eight simply cannot grasp Ronald's persuasive intent.

The American Academy of Pediatrics is clear: "Advertising directed toward children is inherently deceptive and exploits children under eight years of age."

McDonald's also works to get around "gatekeepers," the term executives use for parents and educators who are just trying to make healthy choices for kids. A good example of Ronald's going around parents and marketing directly to their kids is the "McSpellit Club" in which McDonald's rewards children with free burgers and Chicken McNuggets for meeting educational goals. In one Michigan elementary school McDonald's installed a mural of Ronald as well as a "Mini McDonald's" restaurant where students could redeem academic achievement awards for their favorite fast food.

Ronald also tries to win the trust of gatekeepers through corporate responsibility programs like "Go Active! with Ronald McDonald," which are really just marketing by another name.

So that's where we are today: Parents can watch out for their kids. They can monitor their television use. They can monitor what they read and who they hang out with. But McDonald's marketing team continues its clever strategies to get around parents who are just trying to do their job. That's not right.

How pervasive is McDonald's striped marketing arm? Let me give you an example:

I was talking with my 3-year old granddaughter Josephine yesterday and I asked her:

"Do you know how McDonald's gets kids to eat unhealthy foods?"

It's true. In fact, McDonald's is one of the biggest toy distributors in the world.

Surprised, I asked her whether she'd ever been to a Mcdonald's.

She just pointed to her head.

If a three-year old child who's never been to McDonald's can figure it out, then it should be pretty clear to the rest of us. Enough is enough. It's time to retire Ronald. 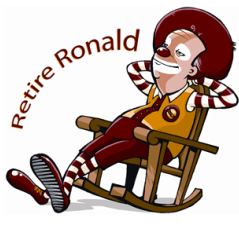 Frances Moore Lappe is the author of Getting a Grip 2: Clarity, Creativity and Courage for the World We Really Want (March 2010) and 17 other books, beginning with the three-million copy Diet for a Small Planet. Fellow Huffington Post Blogger and Small Planet Institute Senior Writer Stefan Sirucek contributed editorial support. Find more on living democracy at the Small Planet Institute.