As you may recall from your eighth-grade social studies class, the United States Constitution was written to be changed and we have changed it often. Even as the last of the 13 colonies were ratifying the Constitution in 1789 and 1790, the First Congress was already deep into debate over the Bill of Rights that would become the first ten amendments.

In the years since, we have tinkered with the Constitution a number of times for a number of reasons: to abolish slavery (13th Amendment), redefine citizenship (14th), give African Americans (15th) and women (19th) the vote, abolish (18th) and un-abolish (21st) the manufacture and sale of alcohol. We have altered how we elect presidents (12th), changed the date they take office (20th), and limited them to two terms (22nd). 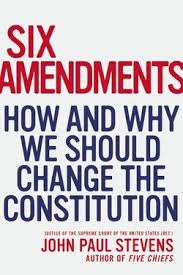 Since the 1960s, when there were three amendments -- giving Washington, D.C., electoral votes (23rd), repealing poll taxes (24th), and adjusting presidential succession (25th) -- there have been only two. In 1971, the 26th Amendment reduced the voting age to 18; in 1992, the 27th Amendment prohibited Congress from increasing its own salaries in the middle of the term.

Despite polling that shows incredible frustration with how poorly Washington works, there have been no serious efforts to address such perceived failings by amending the Constitution. Even proponents of congressional term limits -- who had their heyday during the 1990s with Newt Gingrich's proposed Contract with America -- failed mount a serious effort to put term limits into the Constitution.

Retired Supreme Court Justice John Paul Stevens revives the idea of amending the Constitution in his new book, Six Amendments: How and Why We Should Change the Constitution (Little, Brown & Co.), though only two have much chance of ever happening.

Two of Stevens' proposed amendments -- revising the anti-commandeering and sovereign immunity provisions -- are too legalistic and obscure to galvanize a national effort. Two others -- regulating firearms and outlawing the death penalty -- are too controversial to get traction in the current political environment.

Stevens' final two proposed amendments, though, are aimed at reforming Congress, and there he may be onto something.

First, to combat the increasing tendency of congressional seats to be either safely Democratic or safely Republican, Stevens proposes an amendment that would require states to draw more geographically cohesive districts. That would result in a greatly expanded number of politically moderate districts and, therefore, more members of Congress with more interest in serving the voters in the middle than those at the extremes.

Second, to neutralize the dominance of corporate money in congressional elections, Stevens would amend the Constitution to wrest campaign finance from First Amendment limitations -- and from the Supreme Court -- and allow Congress to impose reasonable limitations on campaign spending.

Richard L. Hasen, a law professor and expert on campaign finance, dinged Stevens in The Daily Beast for the impracticality of proposing constitutional amendments that have no chance of gaining the support of two-thirds of Congress and three-quarters of the state legislatures when the Republican Congress has already rejected more modest campaign finance reform.

That's true to a point, but I come much nearer seeing success from outside pressure on a Congress less popular than bad breath to reform itself than proposed amendments that people either don't care about or are evenly divided. The best-case scenario would be an outsider president like Ronald Reagan or Bill Clinton running an anti-Congress campaign, winning, and then making redistricting or campaign finance reform a major goal of his or her first hundred days in office.

Stevens structured the book as a collection of bench briefs -- short histories of the various judicial interpretations of the provisions that he would change -- that take on issues where he thinks the conservative majority has led the Supreme Court astray in recent years.

Adam Liptak of the New York Times wrote of his recent interview with Stevens that "there was a hint of anger in some of his remarks" and that Stevens "said the court had made a disastrous wrong turn in its recent string of campaign finance rulings."

It's a matter of framing whether Six Amendments seeks more to rebuke the conservative majority for politicizing the Constitution to achieve ideological ends or to improve public policy -- certainly, Stevens would say it is both -- but there should be no dispute that gerrymandered congressional districts and corporate money in elections are structural impediments to effective government and that both could be addressed through constitutional amendments.

Stevens does not make a case for how to galvanize public support for the reforms, or how the amendments would work in practice, but that's not the point of the book, which is to serve as a conversation-starter for a conversation worth having.

Scott Porch is an attorney and writer in Savannah, Georgia. He writes frequently about books for Huffington Post, Salon.com, and Kirkus Reviews, and he is writing a book about social upheaval in the 1960s and '70s.