Meet Mason. He's only 5, but already, he seems to be quite the "ladies' man."

“He likes to play with the other girls,” Mark Lewis, an animal care specialist at Chimp Haven, a Keithville, Louisiana, chimpanzee sanctuary where Mason now lives, said per the Humane Society. "And he likes to follow some of the older females around.” 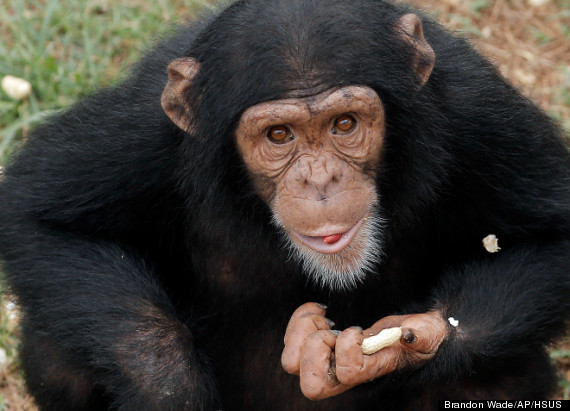 Things haven’t always been so rosy for Mason, a former research chimp. His old home was the New Iberia Research Center in Louisiana, an animal research facility where some animals were allegedly subjected to abusive treatment, ABC News reported in 2009.

Two years ago, Mason, together with 109 of the lab's other chimpanzees, were retired by the National Institutes of Health, and since then, animal welfare activists have been working hard to get them all to Chimp Haven.

This summer, thanks in part to a fundraising campaign that raised millions of dollars, that goal was finally realized. According to the Humane Society, this is the largest group of government-owned chimpanzees ever sent to sanctuary.

Now that Mason and the 109 other retired chimps have settled in to their new digs at Chimp Haven, they're clearly making the most of their golden years. But don't trust us; scroll down to see just what the animals have been up to.

Bonding with family
Brandon Wade/AP/HSUS
Born at New Iberia Research Center, 4-year-old Diane remains close to her mother, Muffy. On the day their group was released into a new habitat, they hung back near the entrance together until Diane was ready to explore the forest. “When there’s activity going on in the group,” said Lewis, “she’ll always kind of have a hand on her mom’s back, as reassurance.”
Trying new sports
Brandon Wade/AP/HSUS
Arden, who just turned 4, was the first juvenile from New Iberia to venture up into the trees.
Playing with friends
Born at New Iberia, 5-year-olds Jimmy and Mason are two of six rambunctious juveniles in their 5-acre enclosure.
Advertisement
Eating what they want, whenever they want
Brandon Wade/AP/HSUS
Hillary has a unique preference for veggies. Sweet treats like frozen pineapple halves are among the produce delivered daily, but, notes Lewis: “I’ve actually seen her eat zucchini before she eats her banana.”
Shmoozing with the cool kids
Brandon Wade/AP/HSUS
Five-year-old Jimmy is spending more time with the older males, watching them “display” -- loud acts that show off their strength and dominance, like punching a doorframe or shaking the mesh. Jimmy’s even been trying his hand at it, though as Lewis says: “Nobody takes him seriously yet because he’s not old enough for it.”
Learning new things
Brandon Wade/AP/HSUS
Ashely is acing the sanctuary’s positive reinforcement training program, wherein staffers teach chimps to present various body parts against the mesh. The clicker training helps vets address injuries and other ailments. “Right now,” Lewis says, “she knows her hands, her head, lips, and she was working on arms the last time I watched her train.”
Advertisement
Just straight chillin'
Brandon Wade/AP/HSUS
The 20-foot climb up the large wooden play structure in the play yard is well worth it, both for the rays and the gossip potential. Chimps like Star can catch a moment in the sun -- and a prime view of what’s going on in other habitats.