The post-recession national unemployment rate is apparently stuck at 8.3 percent. There's ever greater distress in individual states -- Nevada, Rhode Island and California head the long list of states with high unemployment rates -- and many people remain out of work for well over a year. Is there even one bright spot in this gloomy picture? Yes, according to the U.S. Bureau of Labor Statistics (BLS), the fastest-growing segment of the U.S. labor force is women 65 and older.

The BLS foresees an ever-growing role for people in their sixties and seventies in the labor force as the next generations of workers observe and emulate their elders. Consider what these related facts portend. Among pre-retirees at or over age 55, the percentage of women in the labor force -- 36.4 percent -- is at a record high, and the percentage of men has decreased three points to 46.4 percent, according to the Employee Benefit Research Institute.

Moreover, while a fairly stable portion of working boomers say they can't wait to retire, fewer and fewer Boomers intend to stop working at age 65. Some think they'll never be able to afford to retire. Among pre-retirees of both genders, more than three-quarters age 50 and up expect to remain in their current career jobs until they stop working completely, according to AARP; many fewer plan to change careers or jobs, and a small but growing number plan to start their own business.

What might be causing older women to continue in or rejoin the workforce in unprecedented numbers? Several developments could help to explain the phenomena. First, it's widely known that women are healthier, better educated and living longer than in the past. Second, it's evident that every year Baby Boomers are swelling the senior ranks. And, third, it seems obvious that the recession of 2007-09 and ongoing economic stagnation are motivating workers to hold onto their jobs, keep employment-based health insurance if they have it, try to recoup housing values and accrue or rebuild assets in defined contribution plans, if any.

Yet for older women who can choose whether and when to retire, such explanations don't tell the whole story. To be sure, many low-income older women don't have a choice; they must keep working or, having lost a job, start collecting Social Security benefits as early as possible simply to make ends meet. Then too, health problems can also force a retirement. In contrast, women who are fortunate in having a choice in the matter tend to be well educated and working in management, professional or related occupations. These women are the focus of my recent study, "Women Still at Work," and they give many different reasons for continuing to work.

Some women told me they had elected to retire after putting in years on the job full-time but returned to work in their sixties or seventies because they got bored, feared their brains were turning to mush, missed being with people or wanted something meaningful to do. Many more have postponed retirement altogether because they love what they do, and they appreciate -- more than badly need -- the income. I for one found myself "on the shelf" in my mid-sixties when a research grant ran out and, without a new grant, my job inevitably came to an end. This was followed by long-term unemployment despite active job-seeking, a consulting stint, eventual capitulation to retirement, and voila! writing books and blogging. Here's what a few of the women I interviewed told me:

A 79-year-old university professor works full-time with young people because it provides a continuing opportunity to rethink her philosophical perspectives. Her other reason: "The joy of it all."

A 75-year-old self-employed educational therapist works harder than ever. She never expected to be this busy, this happy, this good at what she does at her age. She asks, "Seriously, why retire when you are at the top of your game, have plenty of clients and rewarding work?" Her other reason: "My clients need me!"

A 73-year-old woman owned a travel agency with her husband before they decided to close up shop and become school teachers. Her elderly mother lives with her. With 14 grandchildren nearby and endless meals to cook at "the family B&B," leisure is in short supply. She tells her husband, "We have no time to get old! Since we can't do anything about our age, let's keep busy and take advantage of all the 'living' we can."

A 68-year-old painter feels "energized and smart about work." However, she admits that "nothing is accomplished as quickly as previously!"

A 67-year-old human resources specialist remarks, "I am happiest when my bucket is full. I personally love working and feel validation every day. I took a ten-year break when raising children, and a couple of years off here and there since, and nearly went stark raving mad." Despite being under a lot of pressure at work, "I do not plan to retire until 1) the company decides it's time for me to go, or 2) I can't remember my name."

And, there's the 64-year-old public policy consultant whose feminist spirit speaks for the majority of these independent-minded women: "Our cohort is (finally) participating fully in work within a professional community...Maybe we are holding on because it was so damn hard to get here."

While working men still outnumber working women overall, men in the 65-and-older cohort constitute the second-fastest growing portion of the labor market. That's a parallel story I'm still investigating; to participate in my survey of working men (60+), please email me at lizpaulfideler@mindspring.com or contact me on Facebook. "Women Still at Work" (2012) is available from Rowman & Littlefield. 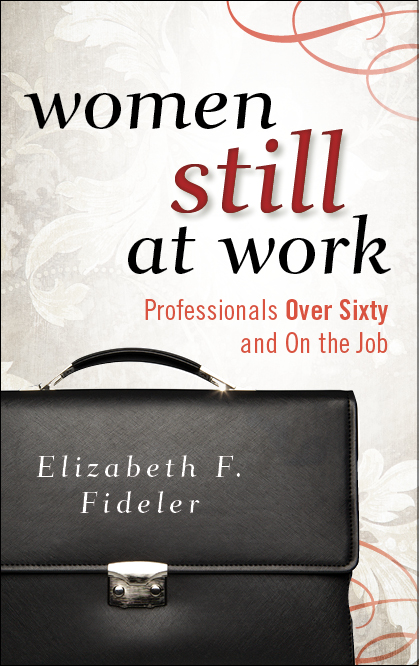