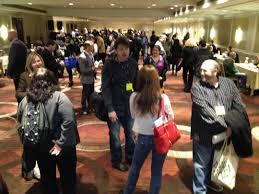 Two years ago I decided to attend a Screenwriters Conference in Hollywood and, despite my reluctance to embarrass myself in public, signed up to present my screenplay at the conference "Pitch Fest." The pitch fest was to consist of sixty to eighty tables staffed with representatives from film agencies and production companies. Participants would line up at tables, pitch their scripts for three minutes, receive two minutes of critique, and then move to the next table on their list. A form of speed dating, I called it, in which all your dates were there for the express purpose of giving you criticism. I feared it like I feared sporting a bikini-thirty years after a bathing suit of any kind looked good on me. The average age of script readers, moreover, had been pegged at twenty-two to twenty-seven years. Would I, in my early seventies, be the oldest person there? I imagined the awkwardness, the alienation, I might experience.

That I even thought about participating in an event like this was the result of a policy I took up shortly after I retired--I'll call it the policy of the Open Door. I'd been an academic writing academic books for forty years, but six months after I retired, I decided to write for myself. There were some long simmering feelings and experiences I needed to come to terms with. I'd do so by putting them into words and I'd see what else, if anything, would develop.

That I'd already proved myself in one line of work, was immensely useful to my project. Although I had to learn--painfully--how not to sound like an academic, when I took up writing memoir, I felt free to be a beginner, free to fail. I also decided that if any doors were to open for my writing, I'd step through them. And so I enrolled in writing classes, was invited by one of my classmates to become part of a collective blog, began my own blog, and wrote the memoir, Tasting Home.

When a door opened to publishing it, however, I had to fight internal terrors. Laying my soul bare and then marketing my story to an unknown public went against my family's ways and against an academic habit that was long ingrained: Ten years ago in academe, promoting your work was considered gauche. I eventually published my memoir and it went on to win some prizes.

In the process of finishing my book, another door opened, this one in my head. It occurred to me that my memoir could be a screenplay. I read five books on how to write a screenplay, took a screenwriting class, and wrote a screenplay based on my memoir. By the time I read about the Pitch Fest, stepping through new doors, while still productive of anxiety, had at least become familiar. I decided to go for it.

I registered for a "pitch workshop" on Thursday before the conference proper began. Led by a man in his early forties, who was funny, brash, and full of razor-sharp advice, the workshop was packed with details about how to create pitches, log lines, and one page "leave behinds." Among the more general things I learned were that (1.) agents and production companies are interested in who you are and what it would be like to work with you, so DON'T BE WEIRD. (2.) Once a representative expresses interest in your project, STOP TALKING. (3.) DO NOT CRY. "THERE IS NO CRYING AT PITCH FEST!"

The leader of the workshop did not think much of scripts about personal transformation: "When I hear the words personal journey" he said, "the only thing that comes to mind . . . is no second act!" My script is about a personal transformation. But despite his discouraging words, I signed up to have him critique my pitch. He was a no-nonsense kind of guy who spent 45 minutes on my pitch instead of the advertised 30 and didn't charge me extra. And he completely transformed what I had written. Underneath the tough exterior, he was kind, and so, it would prove, were the representatives to whom I would ultimately pitch my script. Some were younger than my daughter who was twenty-nine. (One of the conference participants looked as if she were still in high school. I imagined her writing one of those lucrative scripts involving zombies.)

A veteran of countless academic conferences, which are not especially known for cordiality, I was surprised by the friendliness of the crowd. When I signed up for the conference, I thought Hollywood! Ambition! Competition! Snootiness! But that wasn't the case. Women especially introduced themselves and inquired about each other's work. And the men were open too, open and often unafraid to show their own anxiety. When I came upon a line of four young men at one of the pitch tables, I said "I guess I'll find a shorter line." "No" the four young men said. "Stay with us, stay with us!" Far from feeling like an outsider, I felt like a member of a club. Although I'd missed the early morning session--having developed some nerve-induced issues in my digestive track--I attended in the afternoon. And how did that go?

I pitched five tables--and cried twice, cried with the injunction "no crying at pitch fest" ringing in my ears. Was it low blood sugar, late afternoon fatigue, or actually telling my story out loud? I don't know. But the young people hearing the pitch could not have been more sympathetic. One agent said, "I'd rather you do this than be boring." In the end, four of the five tables requested a synopsis, a sign of interest. One woman in her early forties requested the whole script and, months later, the young women with whom I'd cried most abundantly asked to see the screenplay as well. Two years later the script has not been optioned, though it's placed in several contests. There's always more to do.

But the door I'd walked through with so much trepidation led me to useful insights. And, despite some daunting opinions--personal journey = "no second act"--I received a good deal of encouragement as well. Although, as Adrienne Rich once said, "the door is only a door. It makes no promises," it's walking through one door that enables you to try the next. And there are many doors out there--some inside our own heads.