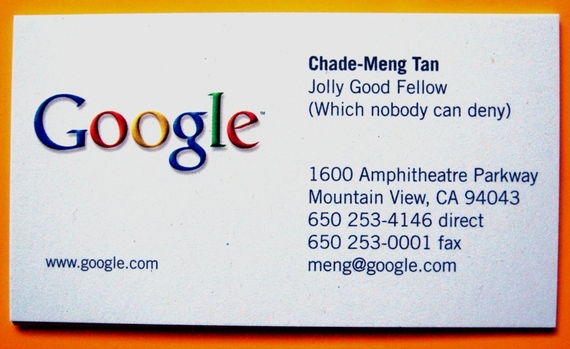 I would like to let you know that I'm retiring from Google.

A few months ago, after I celebrated my 15th anniversary as a Googler (which is my version of the "Google 15", since I never gained 15 pounds as a Googler), and as I looked forward to an impending 45th birthday (yes, I am that old, dammit), it occurred to me that I don't have that many years left and I really need to focus on my two most important priorities: mastering inner peace, and creating the conditions for world peace in my lifetime. Therefore, there are two things I urgently need to give more of my time to. The first is my meditation practice; I need the practice (3 hours a day, at least) to work towards mastery of mind. The second is to devote more of my time to the two charities I help lead, both of which have the potential to create the conditions for world peace in one lifetime. One is the One Billion Acts of Peace campaign, which has the potential to spark a massive global movement to solve the biggest problems facing humanity. The other is the Search Inside Yourself Leadership Institute (SIYLI, pronounced "silly"), which has the potential to massively scale inner peace, inner joy and compassion worldwide. I can't think of any work more important for me to do, and given the finite time I have left, I want to devote most of my time to these two priorities. In a sense, I'm following the example of one of my greatest heroes, His Holiness the Dalai Lama, who meditates for 4 hours a day and spends most of the rest of his time benefiting humanity. I feel like I can only do a small fraction of what he does, but he inspires me to take this path. After a lot of careful consideration, I came to the conclusion that now is the time for me to make this major decision.

Of course, this decision is bitter-sweet for me. I'm excited by the opportunity to spend my time and energy on my most important priorities, but at the same time, it is very hard to leave Google. I absolutely love Google. I love the company, I love the culture, I love being a Googler and, most of all, I love my fellow Googlers. I'm tremendously grateful to Larry and Sergey for hiring me (and then forgetting to fire me for 15 whole years), to Eric for being a friend and role model, to the all wonderful people I've worked with (way too many to name individually), and to my string of great managers, especially my current manager, Karen May, the best manager I've ever had. To all of you who had the misfortune of being my boss, so sorry, and thank you. And to all my co-workers: you are all amazing, and I'm so going to miss you.

Q: Why do you need to meditate for 3 hours a day?

A: In a way, I see myself as the meditation equivalent of a full time musician, artist or athlete, who should primarily be practicing for hours a day. I think the minimum practice time for a full time musician or artist or athlete or meditator should be 3 hours a day. Specifically, I will be working towards mastering a meditation practice known as Jhana, which culminates in the perfection of serenity, concentration and joy. In that sense, I'm going pro.

Q: Why are One Billion Acts of Peace and SIYLI so important to you?

A: One Billion Acts of Peace is a campaign designed to solve the biggest problems facing humanity, such as hunger, poverty, oppression, injustice, and environmental destruction. Those problems are so big that the only way to solve them is to galvanize all the citizens of the world to work together. One Billion Acts of Peace has the potential to spark that massive global movement. We already have the active involvement of 14 Nobel Peace laureates and hundreds of volunteers, inspired 6.6 million acts of peace from more than a million people, gained the support of some giants in the corporate world such as Google and Wells Fargo, and 7 Nobel Peace laureates (led by Archbishop Desmond Tutu) have nominated us for the Nobel Peace Prize. And, we are only just getting started! While Billion Acts focuses on action for the world, SIYLI takes a complimentary approach of spreading inner peace, inner joy and compassion worldwide. SIYLI's vision is, "Every leader in the world is wise and compassionate, thus creating the conditions for world peace." It does so, for example, by delivering the Search Inside Yourself course worldwide, including in organizations such as Google and the United Nations. Search Inside Yourself has been endorsed by the Dalai Lama, former President Jimmy Carter, and many other top global leaders. In its short existence, SIYLI has already deeply touched the lives of many thousands of people. Either one of the two approaches has the potential to create the conditions for world peace in one lifetime. Combined, boom! I really can't think of anything more important I should be doing, besides meditating for 3 hours a day.

Q: What do you do for those charities?

A: I'm Chairman of SIYLI and Co-Chair of One Billion Acts of Peace. In both roles, I expect to continue to live this famous Gandhi quote: "There they go. I must run and catch up with them, because I am their leader!"

Q: Shall I donate lots of money to those charities?

Q: Are you sad to leave Google?

A: Yes, very much so. When I made the decision to retire, it felt like the most logical thing in the world to do. But after I informed my manager Karen May of the decision (she is sad, but very understanding and supportive) and started putting things in motion, I started becoming very sad. Being a Googler has been an integral part of me for 15 years, and I feel that part of me is dying. While struggling with that sadness, I made another important decision: I decided not to die as a Googler. If I do not die as a Googler, then my leaving Google is absolutely unavoidable, it is just a matter of time, and therefore, this sadness that I experience is also totally unavoidable, it is just a matter of time. Since it is entirely a matter of time, I decided it should be at the most logical time, which is now.

Q: Does turning 45 have anything to do with it?

A: Actually, yes. There is a part of me who thinks that retiring on or a few days after my 45th birthday is kinda cool. :) Plus, the older I get, the more keenly aware I am of my mortality and the importance of fulfilling my mission while I'm still alive (because after I die, it gets harder for me to do stuff).

Q: What are you going to do with all that free time?

A: I don't expect to have very much free time at all. Between 3 hours a day of meditation, One Billion Acts of Peace, SIYLI, working on my next book (currently planned for publication in May 2016), plus my other responsibilities (including being Adjunct Professor at the Lee Kuan Yew School of Public Policy and advisor to various startups), there's not going to be a lot of free time left. I plan for most or all of my free time to go to my family. I hope someday to have lots of actual free time, before I die.

Co-Chair of One Billion Acts of Peace