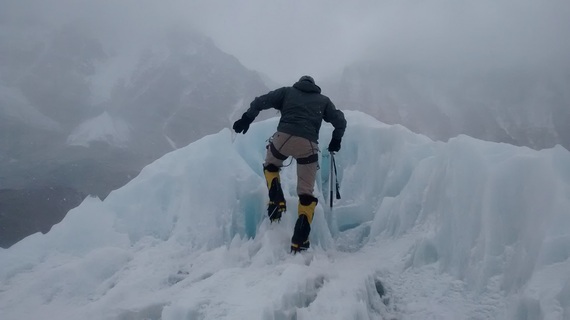 Once the gravity of the tragic avalanche became clear, my expedition to summit Everest on the south side of the mountain was called off. Climbing Mt. Everest was a personal dream of mine - years in the making - and I didn't want to believe it was over. I had worked so hard to reach this point. Despite the tragedy, loss and danger, I still wanted to explore the possibility of climbing Everest from the north side.

You may think, how selfish. Sixteen precious lives were lost on the mountain, and I was consumed with finding an alternate means to climb. To that point, while mountaineers tend to be strong individuals, they can also be perceived as selfish. The very act of putting your life in peril to climb a mountain isn't necessarily the most considerate when it comes to your loved ones.

But for me, this climb held a higher purpose than my own accomplishments. Summiting Mt. Everest is my passion in life; it is my platform to be a voice for those who have none. Being able to share my personal journey as a caretaker for my father, who suffers from dementia, is my contribution to making the world a little more compassionate.

And, with so many lives lost, my desire to reach the top was ignited with a fire. Just when I thought everything I had worked for was lost, I knew I had to persevere with my journey not only for my father, but also to honor the departed souls of my brethren Sherpa.

My previously charted course had been on the south side of the mountain, a more foot-worn path with less peril, aside from unforeseen accidents. For a first timer on Everest, like myself, an expedition from the north side would have to be a brand new expedition, and I only had one shot. I immediately needed to figure out if climbing the north side was even an option, or else I'd have to go home.

I had four calls to make.

First, I contacted Tim Rippel - our expedition leader at PeakFreaks - to give him the news and ask for his advice. His words were reassuring, "Kuntal, if I know someone who can do it, it has to be you. Go for it." Aside from Tim's support, I needed the consent of my family. I called my mother and my wife, Dipti, both of whom gave their blessings to continue on with pursuing my dream, even if it meant more danger and uncertainty. My third call was to my CallFire work family, who had graciously offered to fund the expedition. I also had their support to continue on with the climb, despite additional costs.

Lastly, I phoned two experienced mountaineering/adventure operators in Nepal who were running Mt. Everest Tibet side programs, inquiring if I could join another climb. Both operators frankly told me that my permits would take at least two to three weeks, and that it would be impossible for me to reach the mountain in time to climb it.

The operators advised me to come back in 2015, as that would be the safest and best approach. I was devastated. I had already postponed my climb for two years.

By the beginning of this year, I finally knew I was ready, both mentally and physically. I was 101 percent ready. Not 99.99 percent. This was Everest. Even 0.01 percent made a difference; my life was on the line.

For months leading up to my climb, I'd studied the south side of the mountain in excruciating detail. I had practiced every move mentally and physically. When I took a step back to consider changing my plan to climb the north side, I questioned myself - did I have an equal level of preparedness? The answer was no. To be frank, with the north side I was only at 99.99 percent. It wasn't good enough.

It was clear that it was time to pack my bags and go home. The mountain didn't want me there, and it was giving me every indication to come back and try again in 2015. And, that's what I'll do.

My 2014 Everest endeavor has forever changed me as a person and now I look forward to coming days, weeks and months of intense physical and mental training that will help me stand on top of the world next year.