For centuries, artists painted religious figures, whether saints or gods and goddesses, then still lifes--arguably with religious aspects present--moving into landscapes and portraits of the high and low born, before the crosscurrents of popular culture opened the more psychological frontiers, with Surrealism, Symbolism and Abstract Expressionism taking the forefront. Since the Eighties a new movement has been germinating and is now bursting to full bloom, fueled by hot rod fumes, midwifed by voluptuous pin-ups, nurtured by toys, TV and cartoons. Pop culture has produced new saints and deities, new churches at which worship. When not sketching cells, some animators create fine art, while many of today's fine artists incorporate cartoon iconography into their work--notably Ron English, Ausgang, Isabel Samaras, and the grand-daddy of them all Robert Williams.

Animator-cum-fine artist Dave Weidman's influence is celebrated this weekend in Las Vegas at MONDO LOUNGE III at the Palms Hotel where all things Mid-Century are embraced in stylish fashion by retro-lovers. The 89-year old Weidman, an animator known for Fractured Fairytales, Mr. Magoo and Gerald McBoing Boing and the subject of 2008's book The Whimsical Work of David Weidman has become highly collectible. His delightful hand pulled serigraphs featuring huge-eyed cats and birds, and before that his cartoons, formed a canon for many modern pop artists like SHAG and Chris Reccardi, whose works are also featured at MONDO LOUNGE III.

Like Weidman, Reccardi is an award-winning director, designer, storyboard artist, animator and music composer. An Emmy nominee, he has contributed to numerous acclaimed TV and film projects such as The Ren & Stimpy Show, Samurai Jack, The Powerpuff Girls and Shrek the Third. His fine art incorporates pop culture iconography, evoking an idyllic time when the Beatles ruled the airwaves and Mod made the scene.

As well as being influenced by Weidman, both Reccardi and the highly regarded SHAG collect his art. SHAG (aka Josh Agel)--whose Jet Set, desert and tiki themed work has revived, reshaped and revised the Mid-Century aesthetic--is the host for this weekend's MONDO LOUNGE III at the Palms, where all things Mid-Century/Mad Men era will be celebrated with live music, vintage clothes and cocktails, vendors and art.
SHAG and Reccardi will be on hand, with the former signing his art, and there is an exhibition of their work--along with a limited number of select handpulled Weidman serigraphs--for sale.

This is an unprecedented opportunity to see two highly regarded Pop Surrealist/Cartoon Surrealists work juxtaposed with one of their major influences.

Also on exhibit, Bosko's woodwork is an homage to House of Witco, a design group which created Elvis Presley's Jungle Room at Graceland and the Playboy pool in Chicago. The body of Bosko's work in this series was created with mid-century Vegas and Palm Springs in mind and features hand carved pieces of wood mounted on painted backgrounds. Much like the MONDO LOUNGE III weekend, Bosko has taken a mid-century theme and added a unique contemporary twist. Bosko will be joining SHAG and Chris Reccardi during the weekend. 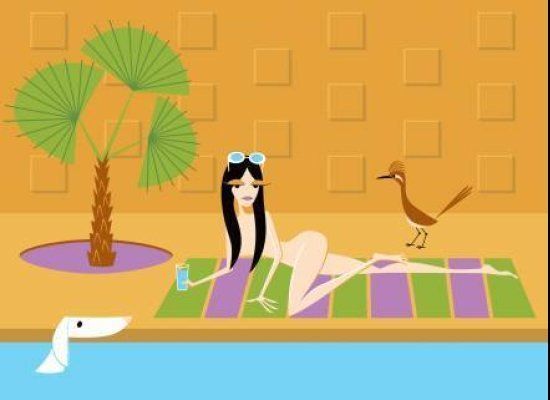