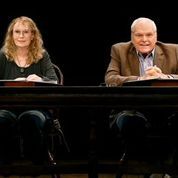 This playgoer's memory of A. R. Gurney's Love Letters--the 1988 two-character play consisting of letters between an upper crust boy-turned-man and girl-turned-woman, performed without memorization or blocking by a middle-aged pair of star actors--is of an amusingly entertaining but slight affair. Seeing Love Letters once again, twenty-five years later, I find it far better than remembered. Gurney's play, as revived at the Brooks Atkinson under the direction of Gregory Mosher, is smart, delightful, and moving.

Gurney gives us two WASPs who spend time together at dancing schools, coming out parties, college weekends and the like; a pair that could have and perhaps should have been lovers. They reveal themselves, in the letters, in a direct and honest manner; best friends on the page, the face-to-face meetings they describe are impossibly awkward. Andrew Makepeace Ladd III is--need we say it?--a straight-laced, cautious little boy, always behaving properly; no surprise when he becomes a U.S. Senator of the Republican persuasion. Melissa Gardner is an artist from a wealthier but broken family, more of a free spirit, and ultimately a lost soul. Gurney places them on an epistolarian seesaw, each balancing the other's wild swings but sometimes falling off (at which point the letters become one-way pleas).

This came off as relatively insubstantial back then, perhaps in part due to the gimmicky circumstance of the production. The producers of Gurney's off-Broadway hit The Cocktail Hour--at the Promenade Theatre, on upper Broadway at 76th Street--noted the success of Love Letters at Long Wharf in the fall of 1988. Given the simple production values and the use of a revolving cast of stars at Long Wharf (starting with Joanna Gleason and John Rubinstein), the producers came up with the idea of doing Love Letters on Sunday and Monday nights, when their other Gurney play was dark. Performances started in March and continued--with two performances per week--until The Cocktail Hour closed in the fall. Knowing a good thing when they had it, they then moved to the 500-seat Edison for another three months; marginally higher-caliber casts played full eight-performance weeks, starting with Colleen Dewhurst and Jason Robards.

Does the play--which spans a half century, starting in 1937--now seem better due to our distance from the events that are described? Andy fights in World War II, Melissa turns bohemian and moves to Europe in the '50s; Melissa embraces the freedoms of the '60s, while Andy becomes more conservative. Are present-day audiences more willing to go along with simple, 90-minute entertainments? The difference could just come from the marvelous performances by Brian Dennehy and Mia Farrow, on display through October 10; but I have a hunch that this production will retain its magic once the initial cast is gone. 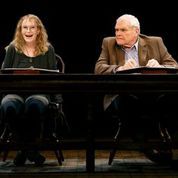 Dennehy is a prime example of what I call "telephone book" actors, in that he could effortlessly and charmingly entertain us by reading random pages from the telephone book. If he could find a telephone book, that is. Dennehy effortlessly charms and entertains us here, grafting a touch of stodgily stuffy smugness onto the otherwise likeable character. Farrow, somewhat surprisingly, is giving the best performance we've seen from her. "Performance" is the correct word; there is a limited amount of acting possible when you are sitting stationary, without props or costumes or blocking, and reading a script through your eyeglasses. But Farrow isn't merely reading; she performs the character. Dennehy (and Gurney) refer a couple of times to L. Frank Baum's 1917 novel The Lost Princess of Oz, one of the fourteen Oz books--and Farrow plays Melissa as a Lost Princess who over the decades becomes increasingly more lost.

The actress--who is best known, perhaps, for her non-acting adventures--has a theatrical background, having appeared often in London in the 1970s (including a stint as a member of the Royal Shakespeare Company). Her only Broadway performance--in 1979 across the street, opposite Tony Perkins in Bernard Slade's Romantic Comedy--was less than impressive. Word is that she was very good as Honey in the 1999 staged reading of Who's Afraid of Virginia Woolf? which celebrated Uta Hagen's 80th birthday. (With Jonathan Pryce and Matthew Broderick completing the quartet, they played one performance at the Majestic and one at the Ahmanson in Los Angeles.) In any event, Dennehy is the sturdy rock of this Love Letters while Farrow grabs us and pulls us into the emotional center.

Dennehy will remain a second month, with Farrow giving way to Carol Burnett (through November 8). Then come Alan Alda and Candice Bergen, through December 5, followed by five-week stints by Stacy Keach and Diana Rigg and--starting January 10--Anjelica Huston and Martin Sheen. Business permitting, I suppose; and the producers--led by Nelle Nugent, one of the lead producers of the original productions of Amadeus, The Elephant Man and Nicholas Nickleby--surely have more stars lined up for the spring.

Back in 1989, one visit to Love Letters was enough for me. Having seen Dennehy and Farrow and experienced the enhanced emotions of this new production, I will happily contemplate returning to see what other favorite actors will make of Gurney's privileged but forlorn non-lovers.