In 1938, the great photographer Walker Evans boarded what he called the "swaying sweatbox" of the New York subway with a Contax camera strapped to his chest. Riding up, down, and crosstown on the IRT, BMT, and IND, Evans used his hidden camera to shoot the unposed faces of New York's commuters lost in reverie, conversation, or the pages of The Daily News. Befurred matrons, delivery boys with furrowed brows, wimpled nuns, African-American men with silk ascots -- for three years, the lens poking between the two top buttons his topcoat captured New York's commuters, in glorious 35 mm black-and-white, and in all their humanity and individuality.

The author and critic James Agee, who wrote an essay that accompanied the photos (later published in book form as Many are Called), saw New York's subway riders as "members of every race and nation of the earth. They are of all ages, of all temperaments, of all classes, of almost every imaginable occupation... Each, also, is an individual existence, as matchless as a thumbprint or a snowflake."

Ayn Rand perceived something very different in New York's subway riders: not humanity, but the herd. In The Fountainhead, which was written at the same time Evans and Agee were collaborating, the best-selling egoist describes a character picking up the scent of commuters through a sidewalk grate: "an odor of dust, sweat and dirty clothing, worse than the smell of stockyards." For Rand, it was also the smell of the mediocrities who had no choice but to ride public transit: "the anonymous, the unselected." (Though Rand had a special horror of the subway, she never learned to drive; she spent her life being driven around.)

The question of whether straphangers are the salt, or the scum, of the earth, is an old one, and the answer has always revealed more about an observer's ideology than it has about the realities of moving around the metropolis. In the '80s, neo-cons scorned the transit-riding hoi polloi (Margaret Thatcher notoriously called 30-something bus riders "failures") but savvy municipal politicians have since used a ride on the urban rails as a short cut to street cred (think of former Mayor Ken Livingstone on the London Underground, or Michael Bloomberg much publicized rides on the Lexington Avenue line). Now, as sociologists chronicle the suburbanization of poverty, and homes in walkable urban neighborhoods command a hefty price premium, transit is losing some of its old stigma. It is a sign of the times that Newt Gingrich, before he suspended his campaign for the presidency, blasted the "elites" of Manhattan, singling out for special scorn those who lived in city "high-rises" and "ride the subway."

The reality is that, across North America, transit ridership is skyrocketing. The New York subway, the continent's busiest, recorded 1.6 billion rides last year, a record since the boom years after the Second World War. Not surprisingly, the 2008 gas price spike caused traffic on bus, commuter rail, and light rail (27 cities now have trolleys and modern streetcar systems) to skyrocket, but last year they continued to attract new customers -- nationally, the most since 1957 -- as "discretionary riders" left their cars at home. In some cities, congestion is driving the switch to transit. In Los Angeles, which consistently records the nation's worst traffic delays, voters approved a half-cent region-wide sales tax to fund new transit, including an extension of the subway to Santa Monica.

Car use, meanwhile, continues to decline. Per capita vehicle miles traveled, the most reliable indicator of automobile dependency available, plateaued in mid-decade, and are now at their lowest levels since 2000. The declines are particularly dramatic among the young. Fewer teenagers are driving than a generation ago (less than a third of 16-year-olds have drivers' licenses, versus half in 1978) and almost half of those aged 16 to 24 say they would choose Internet access over car ownership. There are signs that an obsession with vintage Mustangs and other bygone icons of car culture are -- like hammer-ons on flying-V guitars and headbands on receding hairlines -- becoming cringe-worthy symbols of a previous generation's arrested adolescence.

Yet rail and urban transit continue to be poor cousins to automobiles and freeways, which still function as America's de facto mode of mass transit. Less than three cents of the federal gas tax, which has been stalled at 18.4 cents a gallon since 1993, flows to cities for funding transit. Freeways, meanwhile, received $52 billion in federal funding in 2010, while Amtrak, in spite of record ridership, limped along with $1.5 billion in subsidies.

These days, rational thought about transport funding is hobbled by partisan squabbling. Conservatives tend to equate transit and inter-city rail with big government, preferring to cast their lot with private automobiles and suburb-serving freeways. However, as even a cursory acquaintance with the history of infrastructure demonstrates, transport modes are surprisingly independent of ideology. While private entrepreneurs built the urban rail systems of London, Paris, and New York, dictators were among the earliest and most fervent supporters of the automobile. Benito Mussolini opened the world's first true freeway, the autostrada, in 1924, and Adolf Hitler conceived his network of autobahns as a means of quickly mobilizing Nazi armies, with mass ownership of Volkswagens as the way of the future. Today, authoritarian China is covering all the bases, investing in both a nationwide network of highways and some of the world's largest subway systems. An investment in mass transit no more leads to the tyranny of the masses than freeways and a free market in cars guarantee unfettered freedom of movement.

But in North America, the bogus culture war persists: Transit proponents look at automobiles as the domain of society-phobic individualists, while drivers too often see bus riders, pedestrians, and cyclists as greener-than-thou zealots. Urbanites instinctively know that things aren't that simple: every subway-rider hails a taxi now and then, and even hardcore motorists find themselves longing for a bike ride in a park or a stroll on a plaza. In the city, everybody goes multi-modal.

Cars and trucks aren't going to disappear any time soon: They have become crucial for leisure and load-carrying, and irreplaceable for many of their functions in the city. In many North American metropolises, however, there is evidence that people are already starting to them the way automobiles have long been used in Japan and Northern Europe: for runs to furniture stores, distant friend's homes, or weekend jaunts to the country, rather than for day-to-day commuting.

The quiet resurgence in the use of buses, trains, streetcars, and subways, meanwhile, is likely to continue, and cities that make the commuting experience as pleasant as possible will reap the rewards. Evans's "swaying sweatbox" continues to rattle beneath the streets of New York; air-conditioned now, but as full of individuals as it ever was. It's time we stopped viewing them with elitist condescension -- through a grate, like Ayn Rand -- or surreptitiously, through the lens of a hidden camera, even one that's been dignified by James Agee's ennobling gaze.

After all, we are all straphangers now and then: just people trying to share, and get around in, that greatest of all human creations, the city.

Taras Grescoe is the author of "Straphanger," which was published by Holt in New York in April. 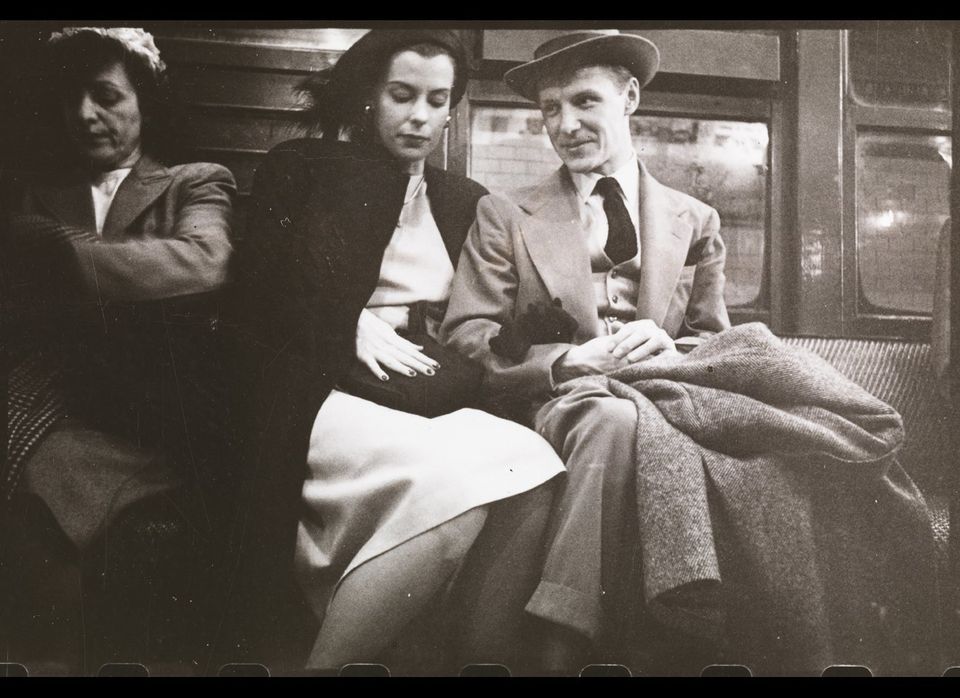