On April 15, perhaps as you're reading these words, working people in 200 American cities will rally for a $15 dollar base wage and the right to form a union. Solidarity demonstrations are planned in more than 30 cities on six continents, and have already taken place in Switzerland, the Philippines, South Korea, New Zealand, and Japan. The "fight for $15" matters -- because the lives of working people matter, and because the success of this effort will help strengthen the American economy for everyone.

But the significance of April 15's action runs even deeper than that.

There were times in recent history when observers of our political and economic debates might have been forgiven for thinking that America's working men and women -- the teeming millions who built this country and were the engines of its economy during its most prosperous years -- had vanished from the face of the earth.

They were always here, of course, even in the nation's capital. Their fading footprints could be glimpsed in an occasional statistic or economic report, and they reappeared like clockwork every four years come election time. But even then they were treated like offstage characters in a one-act play, unseen and unheard, there only to be addressed by the principal actors in loud declamatory tones.

The employees in this coalition of "fast food cashiers and cooks, retail employees, child care workers, adjunct professors, home care providers, and airport workers" were still among us, of course -- teaching our children, providing us with goods and services, helping us return home after long days of travel. But as far as political insiders were concerned, they had no lines of dialogue in the drama of their own lives.

Unions have been struggling against decades of anti-labor rhetoric, hostile state laws, indifferent regulation, and weakened support in Washington. According to a report by the Campaign for America's Future called "Inequality: Rebuilding the Middle Class Requires Reviving Strong Unions," unions represented more than one-third of the workforce by the end of World War II. Today they represent 7 percent of American workers, roughly equivalent to 1916 levels.

The resulting political invisibility has been seen in the plunging fortunes of the middle class - or, if we dare call it that, the working class. After decades of growing inequality and a recession caused by Wall Street fraud and recklessness, how much of the post-crisis recovery went to the top 1 percent?

And yet, in a few short months, the Occupy movement began shifting the national dialogue away from the faux centrism of corporate-friendly Washington insiders and back toward the majority. That demonstrated the power which a mass movement can deploy against an insular political system.

Despite this shift -- and a resulting change in presidential rhetoric which may have ensured Obama's reelection -- the centrifugal forces driving democracy away from its majoritarian center are stronger than ever. It takes a mass movement to counter forces that powerful. The Fight for $15, born of a handful of fast-food workers but growing quickly, has the potential to be such a movement.

There's no reason to be deceived or discouraged. Movement matter. They matter because, even as the corrupting power of campaign cash makes true democracy harder than ever to achieve, the political debate can still be changed through mass protest. Today, years after Occupy first arose, even Republican presidential contenders are denouncing wealth inequality (if only to parade the failed tax-break solutions of the past).

Fight for $15 has the potential to change our national conversation the same way. In fact, the change has already begun. That presents a challenge for Hillary Clinton's presidential campaign. Will Secretary Clinton take up the Fight's cause by embracing its clear and specific goals? That could boost her prospects in a way that generalizations about inequality cannot.

Fight for $15 can also help turn rhetoric into concrete policy changes, some of which can already be seen in new initiatives at the city and state level.

This struggle certainly matters economically. The minimum wage has fallen well behind inflation, much less productivity, while corporations and the wealthy have taken all of the productivity gains of recent decades: 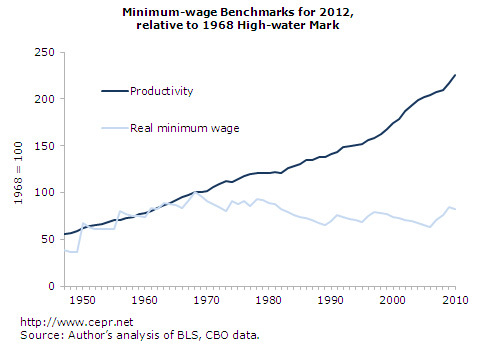 This stands in stark contrast to the prosperous decades after World War II. CAF's report on unions and inequality notes that "America grew together" during those decades, "with the incomes of working people actually rising somewhat faster than incomes at the top."

Fight for the Future

The workers represented by Fight for $15 must contend with the corporate world's ever-evolving techniques for diverting wealth from its employees. These techniques include "permanent part-timism," in which long-term employees are treated as part-time and/or temporary workers; rampant wage theft (now with better automation!); new and aggressive forms of corporate franchising, which attempt to insulate corporations from their responsibilities as an employer; and the so-called "sharing economy," which seeks to reduce the once-prosperous American middle class to a fragmented crowd of peddlers and piece workers.

The Fight for $15 also stands in opposition to another disturbing trend: the increasingly arrogant and high-handed way so many corporations treat their employees. (As the United Steelworkers' Leo Gerard notes, that high-handed treatment includes punishing workers who are part of the Fight for $15.)

Despite claims to the contrary, corporations have enough money to pay their workers a decent wage, as this chart from Doug Short shows:

But, human nature being what it is, corporate executives would rather keep these profits than share them. It will take a strong worker's movement to change that.

And we're all affected when our tax dollars must be used to meet the basic living needs of underpaid workers - yet another taxpayer subsidy to the wealthy and powerful.

Return of the Vanishing Worker

A change in social consciousness -- the renewal of our social contract -- has never been possible without a grassroots movement. From abolition to the first labor movement, from suffrage to civil rights, our most profound moments of social change have always begun with mass action. This movement has the potential to renew and reinvigorate our social contract once again.

Its members aren't just fighting for themselves. Fight for $15 has allied itself with students, professors, and the #BlackLivesMatter movement which is fighting to protect young African Americans. It recognizes that all struggles for justice are interconnected. Those who would exploit young people with inadequate wages are unwilling to invest in their education. The corporations who refuse to pay a living wage are bound by a latticework of interlocking investment and contracts to the ones promoting the militarization of America's urban police forces -- even as inner cities crumble and their residents are demonized.

(ALEC, the Koch Brothers-backed alliance of corporate funders and state government officials, has promoted a range of measures which have harmed urban and minority communities, including the "stand your ground" laws which led to the deaths of Trayvon Martin and others.)

As our world continues to change, we will continue to face new challenges. We will need new movements, new alliances, and new ideas. But behind them will remain an idea as old as the labor movement itself: that all working people have the right to a decent life. That means a living wage, and time to live your life. It means knowing you'll be financially secure decades from now, and knowing that your work hours have been scheduled for the next week so that you can arrange for child care.

Labor movements are a symbol of our values and an expression of our renewed hope. The Fight for $15 is a fine cause on its own merits. But its greatest importance may lie in the fact that it represents the return of the "vanishing worker" -- which in the end means the return of our friends, our families, and our neighbors -- to the American political stage.