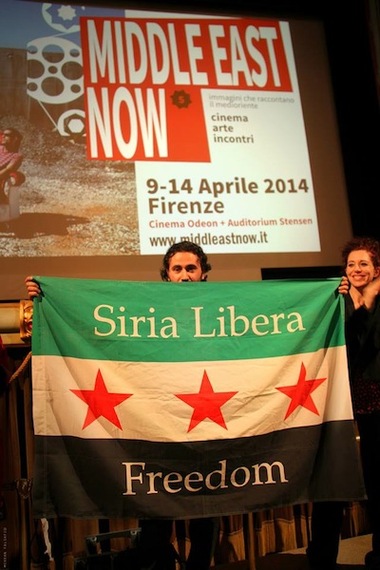 I'm not sure why but Janis Joplin's lyrics from "Me and Bobby McGee" play in my mind whenever anyone speaks of the Arab Spring: "Freedom is just another word for nothing left to lose, Nothing don't mean nothing honey if it ain't free, now now."

Haunting, but perhaps because Joplin herself knew exactly what price is attached to that elusive word or even realized, through her own struggles, that in our search for it, the Utopian concept of freedom, we forget how important comfort, peace and routine are in our human daily lives...

These days, the results of the revolutions that started in 2011 in Tunisia, then spread to Egypt and many more countries, finally to erupt in Syria, still haven't achieved freedom. What the people demanded is not what the people got, with Tunisia tethering on Salafism, the Army running the show in Egypt and Syria -- well, that's where Talal Derki's apocalyptic documentary Return to Homs comes in. Syria has become a wasteland, physically and emotionally, humanly forgotten yet constantly talked about in the news, a devastatingly real representation of the phrase "hell on earth."

It's as if we're all watching the daily show of a developing catastrophe, one too gigantic for us to believe, and so we tune out, turn off and try to reason that it's perhaps media propaganda... I know I felt that way, until Derki's film set me straight.

As I sat through Return to Homs in Florence, screening as part of the Middle East Now film festival this past week, I could not believe that for someone, somewhere, this was real life -- let alone for a whole people! As some have pointed out, Syria has been a cause unable to garner true sympathy around the world, perhaps because the images we see daily on the news don't convey the true state of things, or just blast us with devastation. I won't sugar coat it, Return to Homs does that too. Tragically, graphically, without the abstractness that Al Jazeera presents by showing billows of smoke behind buildings and strangely distorted bodies in mass graves. We all know by now that we need the human angle to connect, we need to feel ourselves on the front lines to truly empathize and Derki's footage sticks our noses right into the personal toll on the "rebels", the martyrs who have given up every semblance of daily life to fight this unseemingly endless battle.

At the center of Derki's film stand two men, Ossama and Basset. Unlikely heroes, reluctant patriots, true men, no more than 25 years old. Their resilience is pushed to the limit, in the name of freedom, and, without giving too much away we don't all already know, that freedom has come at the price of everything in their lives. Is it worth it? At times, even they don't know the answer, but keep fighting on, each day a little bit worse for the wear.

After the screening at the fantastic Middle East Now festival, the audience had questions. Many questions. They ranged from the insightful to the absurd, as is typically the case for Q & A sessions. Derki is a wonderfully passionate ambassador for Syria and his film lives on in his words and gestures. At one point, the discussion turned to women, specifically the lack of women in his film and during the revolution. The same women who seemed to have been there on the front lines of Egypt, Tunisia and these days, in Ukraine. Derki masterfully pointed out that in Syria "it is not a kind of romantic revolution" but true war, in every aspect. Women, as is often the case in societies where our gender is respected and protected, are at home indeed, fighting their own battle. Resistance doesn't mean only on-the-street revolting, it can be helping out to keep the family safe at home. That's the situation in Syria.

While I could have easily dismissed Return to Homs as propaganda, and tried to with all my might -- perhaps to preserve my own idea that the world could be alright after all -- great organizations such as the World Cinema Foundation have given the film the legitimacy it deserves. Martin Scorsese's wonderful initiative to preserve for posterity the best in our cinematic cultural heritage, to help us understand and connect with the world, has promised to restore Derki's work when needed, be it in two, ten or fifty years from now.

Ultimately, I believe a film is about the audience, what each person walks away with after a screening and with Return to Homs having been voted the favorite at Middle East Now, winning the coveted Audience Choice Award, I'd say Derki has managed the impossible: to make the Syrian crisis real, give it a face and overwhelm our hearts. To the point of no return.

Photo of Talal Derki in Florence by Mehran Falsafi - all rights reserved, used with permission