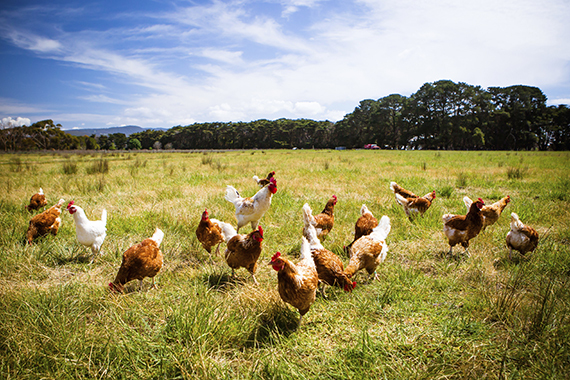 There was a time when a shopper seeking pastured eggs needed to drive across town to a farmers market or—heaven forbid—drive out of town to visit an actual farm. No longer. Eggs from hens raised on pasture are increasingly available at major supermarkets across the country. "Cage free" is fast becoming the industry standard, while "pastured" is replacing organic as the niche alternative, all part of a major shift—referred to by some as a "renaissance"—in the US egg market.

During the last half of the 20th century, in order to increase production and efficiency, farm animals in the United States were moved off pasture and into intensive confinement. Egg-laying hens were relocated into small battery cages stacked ceiling-high inside giant dimly lit barns, while sows were locked in metal gestation crates for much of their joyless lives, and cattle were sent to massive, barren feedlots for unnatural fattening on grain.

Make no mistake: The current state of the egg industry is grim for hens—approximately 90 percent of the birds within the industry are still confined to battery cages. But dozens of large companies including Walmart, McDonalds, and Costco, have now committed to sourcing eggs from cage-free systems. In fact, 14 of the 15 largest grocery chains in the United States have made cage-free commitments. The United Egg Producers estimates that even without further commitments, half of the egg industry will switch to cage free-systems to meet current demand. While cage-free does not guarantee cruelty-free, it is a positive step in that direction.

As cage-free production becomes the industry norm, the bar is moving even higher to qualify for the high welfare, sustainable market. The focus is turning to eggs from hens raised outdoors, on pasture, just like the good old days. In fact, large pastoral egg companies—most notably, Vital Farms, Happy Egg Co. and Handsome Brook Farm—have increased in numbers and size over the last several years; eggs from these companies can be found in grocery stores across the country, including large chain stores like Target, Wegmans, Fred Meyer, and Safeway.

The deconstruction of the US egg market is impacting the organic sector, as well. Over the past decade, a half dozen or so large, primarily conventional egg corporations entered the organic market by building small porches onto the sides of their sheds and declaring that they were providing outdoor access for hens. Unfortunately, the US Department of Agriculture (USDA) went along with the deception, bringing us to a point where up to half of all eggs sold as USDA Organic come from birds who never set foot outside on soil.

The USDA's National Organic Program recently released a proposed regulation to help reverse the damage by requiring that all birds, including hens, be provided meaningful access to the outdoors. With the industry standard heading toward "cage free," and "pasture raised" fast becoming the preferred alternative of discriminating consumers, the organic market is being pushed to strengthen its welfare position in order to remain relevant and competitive. In the short term, some producers without the ability to give outdoor access may exit organic for the cage-free market, but the move to higher welfare standards improves the long-range prospects for the organic sector.

Education is likely necessary to inform consumers about the differences among brands of eggs that are marketed as "cage free" (confined to a barn), "free range" (chance to go outdoors) and "pasture raised" (living on grass and eating bugs!). The differences can be significant. For example, cage-free birds are each typically provided only about 1.2 square feet of space inside of a barn, while free-range birds receive up to 20 square feet outdoors, and pasture-raised birds may have access to 100 square feet or more of outdoor space.

It would also help if a government agency (take notice, US Food and Drug Administration and USDA) assumed responsibility for overseeing the use of marketing claims related to the housing of hens. Currently, no agency defines or monitors the truthfulness of animal welfare claims on eggs, excepting the proposed regulations for the USDA Organic label mentioned earlier.

Egg consumers can play a role in this shift toward higher welfare for farm animals by seeking out brands that source from hens who are not just cage-free, but raised on pasture on a farm independently certified for animal welfare.

The USDA is taking comments through June 13th on its proposed rule for animal welfare under the USDA Organic label. You can submit a message in support of higher organic welfare standards here.