As the plane landed in Port au Prince, I pressed my face to the window and my heart thumped against my seat. The last time I stood on Haitian soil was in late December, 2009, a few weeks before what locals now gravely refer to as "the Thing." When I arrived at Port au Prince airport that time, I met Molly, a 23 year old volunteer caretaker for special needs children at an orphanage, and together we braved the hilarious chaos of Haitian baggage claim. Only days later, she was dead, along with roughly 300,000 others. I thought of her long strawberry blond hair as I stepped onto the hot tarmac and my eyes shot to the large jagged cracks in the airport walls. 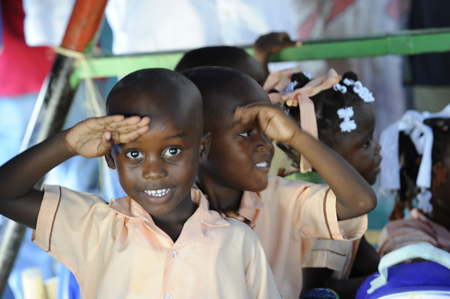 Riding through town in the back of a pickup truck, I felt a stab in my gut each time we passed a mangled heap of concrete and rebar, which was so often that any building left standing appeared exceptionally strong. There is no order to the destruction, no obvious reason why one structure stood but not the nursing school next door, where all the students and instructors were buried. I couldn't look into the pancaked layers of heavy concrete without holding my breath and wincing. It's no wonder so many died. They had no time to run before the world came down in giant, solid, sheets of rock. Here and there, climbing amidst the mountainous crumble, children flew kites made from plastic bags on pieces of string. Life must go on. 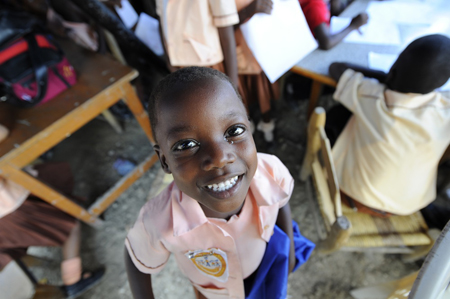 I go to Haiti as a member of an organization, Artists For Peace and Justice, which supports the work of a Doctor and community organizer in Port au Prince named Father Rick Frechette, who has devoted the last 22 years of his life to serving the forgotten people of Haiti. He runs the only free pediatric hospital in Port au Prince, along with an orphanage, several elementary schools, and a center for children with special needs. He also distributes the only clean water to residents of the sprawling slum of Cité Soleil. In response to the catastrophe on January 12th, APJ immediately sent surgeons, medical equipment and emergency supplies to Father Rick's hospital. Our board member Dr Reza Nabavian flew to Haiti days after the quake to perform emergency amputations, after which he set up a rehabilitation clinic to fit injured children for prosthetics, some so tiny they look like doll parts. 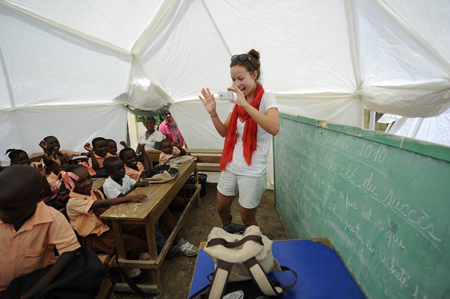 In the past year, working with Father Rick and his team, we have been able to make an enormous difference in the lives of thousands of Haitian children. Our commitment to providing education for the poorest children is what drives us forward as the country begins to rebuild. The children in our sponsored schools have suffered trauma that would destroy you and me, and yet they somehow find a way to show up in clean uniforms, eager to learn, sometimes in sweltering tents that will serve as classrooms until the students once again feel safe stepping under a roof. Our responsibility is to make sure they are fed, healthy, and safe while receiving an education that will encourage them to rise to their potential as leaders, so that Haiti's brilliant minds are no longer left untapped. This is our response to the injustice we have seen in Haiti, before and after the earthquake, and we have now begun building an effective education model that will benefit thousands of children in the country when completed. The key to our success in all of this is partnering with local organizers who know and respect the people to be helped as community members rather than seeing them as charity cases to be pitied. These children should be traumatized and withdrawn and yet they are there, waiting and ready to be taught, hungry for knowledge, and excited about the future. I am in awe of their courage, and have no doubt that they will thrive once given the chance. 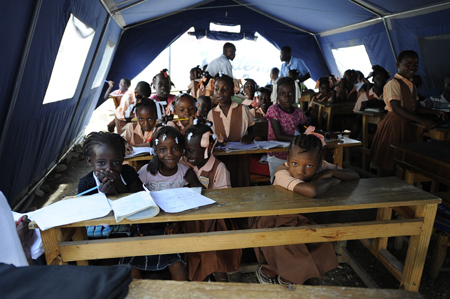 On my last day in Haiti, I stood silently with the carefully wrapped bodies of tiny children in the morgue of the hospital where I slept, and wondered if they were the ones I heard wailing desperately through the night. I hurried to see our 7 year old friend, Davidson, found injured but alive amongst a pile of bodies in rubble. When I said goodbye he was darting from ward to ward, snapping imaginary photos on a plastic toy camera with the two fingers he has left on his left hand. I want Davidson to have a shot at a future, beyond his fight for survival. He deserves to rise through the levels of education that will grant him access to a valuable and impactful life. 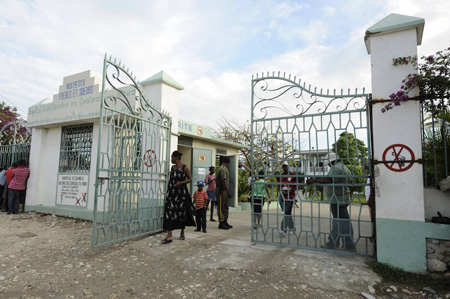 APJ needs funds in order for the schools to stay in operation and to improve in the ways we know possible. We are unusual in that we use 100% of donations to support our programs, skimming off nothing for administrative costs. Many people are wondering how they can help, now that the telethons have packed up and moved on to the next worthy cause. Education is the only way to empower a population, and APJ is dedicated to finding the most effective, sustainable, and efficient ways to make that possible for Haiti. I am proud to ask for your help with this important undertaking.