As Americans debate whether the US should bomb Syria, which would surely kill innocent victims, let's remind ourselves about another bombing, 50 years ago today, that killed innocent victims.

On September 15, 1963, less than three weeks after King delivered his "I Have a Dream" during the March on Washington, members of the Ku Klux Klan bombed the Sixteenth Street Baptist Church in Birmingham, Alabama, during Sunday morning services. The blast killed four young girls -- Addie Mae Collins (14), Cynthia Wesley (14), Carole Robertson (14), and Denise McNair (11) -- and wounded many more. The bombing took place in the wake of the civil rights movement's Birmingham campaign, which, via the new medium of television, exposed much of America to the vicious racism of the Jim Crow South and the Birmingham police in particular. Three days after the bombing, King delivered this eulogy at the funeral service for three of the children. (A separate service was held for Carole Robertson). The text is from the remarkable King Papers Project at Stanford University, where you can also listen to the audio of King's speech. 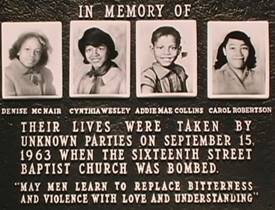 This afternoon we gather in the quiet of this sanctuary to pay our last tribute of respect to these beautiful children of God. They entered the stage of history just a few years ago, and in the brief years that they were privileged to act on this mortal stage, they played their parts exceedingly well. Now the curtain falls; they move through the exit; the drama of their earthly life comes to a close. They are now committed back to that eternity from which they came.

These children -- unoffending, innocent, and beautiful -- were the victims of one of the most vicious and tragic crimes ever perpetrated against humanity.

And so my friends, they did not die in vain. (Yeah) God still has a way of wringing good out of evil. (Oh yes) And history has proven over and over again that unmerited suffering is redemptive. The innocent blood of these little girls may well serve as a redemptive force (Yeah) that will bring new light to this dark city. (Yeah) The holy Scripture says, "A little child shall lead them." (Oh yeah) The death of these little children may lead our whole Southland (Yeah) from the low road of man's inhumanity to man to the high road of peace and brotherhood. (Yeah, Yes) These tragic deaths may lead our nation to substitute an aristocracy of character for an aristocracy of color. The spilled blood of these innocent girls may cause the whole citizenry of Birmingham (Yeah) to transform the negative extremes of a dark past into the positive extremes of a bright future. Indeed this tragic event may cause the white South to come to terms with its conscience. (Yeah)

And so I stand here to say this afternoon to all assembled here, that in spite of the darkness of this hour (Yeah Well), we must not despair. (Yeah, Well) We must not become bitter (Yeah, That's right), nor must we harbor the desire to retaliate with violence. No, we must not lose faith in our white brothers. (Yeah, Yes) Somehow we must believe that the most misguided among them can learn to respect the dignity and the worth of all human personality.

May I now say a word to you, the members of the bereaved families? It is almost impossible to say anything that can console you at this difficult hour and remove the deep clouds of disappointment which are floating in your mental skies. But I hope you can find a little consolation from the universality of this experience. Death comes to every individual. There is an amazing democracy about death. It is not aristocracy for some of the people, but a democracy for all of the people. Kings die and beggars die; rich men and poor men die; old people die and young people die. Death comes to the innocent and it comes to the guilty. Death is the irreducible common denominator of all men.

I hope you can find some consolation from Christianity's affirmation that death is not the end. Death is not a period that ends the great sentence of life, but a comma that punctuates it to more lofty significance. Death is not a blind alley that leads the human race into a state of nothingness, but an open door which leads man into life eternal. Let this daring faith, this great invincible surmise, be your sustaining power during these trying days.

Now I say to you in conclusion, life is hard, at times as hard as crucible steel. It has its bleak and difficult moments. Like the ever-flowing waters of the river, life has its moments of drought and its moments of flood. (Yeah, Yes) Like the ever-changing cycle of the seasons, life has the soothing warmth of its summers and the piercing chill of its winters. (Yeah) And if one will hold on, he will discover that God walks with him (Yeah, Well), and that God is able (Yeah, Yes) to lift you from the fatigue of despair to the buoyancy of hope, and transform dark and desolate valleys into sunlit paths of inner peace.

And so today, you do not walk alone. You gave to this world wonderful children. [moans] They didn't live long lives, but they lived meaningful lives. (Well) Their lives were distressingly small in quantity, but glowingly large in quality. (Yeah) And no greater tribute can be paid to you as parents, and no greater epitaph can come to them as children, than where they died and what they were doing when they died. (Yeah) They did not die in the dives and dens of Birmingham (Yeah, Well), nor did they die discussing and listening to filthy jokes. (Yeah) They died between the sacred walls of the church of God (Yeah, Yes), and they were discussing the eternal meaning (Yes) of love. This stands out as a beautiful, beautiful thing for all generations. (Yes) Shakespeare had Horatio to say some beautiful words as he stood over the dead body of Hamlet. And today, as I stand over the remains of these beautiful, darling girls, I paraphrase the words of Shakespeare: (Yeah, Well): Good night, sweet princesses. Good night, those who symbolize a new day. (Yeah, Yes) And may the flight of angels (That's right) take thee to thy eternal rest. God bless you.