We thought she would make it. She had been released from the hospital a few days earlier, admitted for a blood clot in the lungs. But it turns out, the Little Warrior, as she was known, had fought her last fight. Now God's got her. 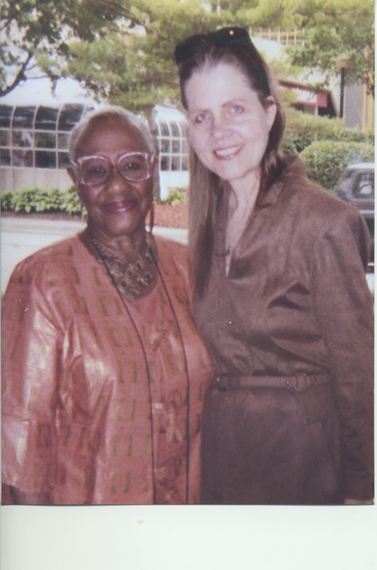 My godmother, Rev. Willie Taplin Barrow, lived to be 90 years old, born on Pearl Harbor Day, December 7th, 1924, before it actually became Pearl Harbor Day in 1941 when Japan bombed us, America's catalyst for entry into WWII.

She died on Warren Beatty/Annette Bening's 23rd wedding anniversary, March 12, 2015, making me think of the 23rd psalm, "The Lord Is My Shepherd." It's also Mitt Romney's 68th birthday. So both sides of the political aisle are represented.

Ironic, because one of my godmother's favorite sayings was, "We are not so much divided as we are disconnected." Might the significance of her death on March 12 be to bring those of opposing viewpoints together to talk and break bread? Beatty flirted with running for president, and was a moving force behind Sen. Gary Hart's presidential bid. Romney actually ran. Twice.

My godmother died on a day which is an important day in both Beatty's and Romney's lives, serving perhaps as a metaphor for what all of us should be doing; stop being divided and start connecting with one another, especially in light of the boycott of some senators and members of Congress of Israel Prime Minister Benjamin Netanyahu's speech last week.

Divided or disconnected, Godmother Barrow's secret to longevity, she told me, was to forgive one another, and not hold grudges. Most of us, myself included, are not very good in the forgiveness department, yet we want others to forgive us. We just don't want to forgive them!

When I think of my godmother, I think of her energy and enthusiasm. And our praying together over the phone when we were not together in person. For she was not just the Little Warrior, named such because of her stature of just four feet, eleven inches -- the same as my mom -- but Rev. Barrow was also a great Prayer Warrior.

Of Rev. Jesse Jackson, Sr., she said she was his "Mother in the Movement", referring to the civil rights movement, and he said of her, she was a woman of "unusual courage and character."

The daughter of a Baptist minister, Rev. Barrow earned a Master's in Divinity degree from Warner Pacific Theological Seminary in Portland, Oregon, a leadership certificate from Harvard, and had Honorary Doctor of Divinity degrees from the University of Monrovia in Liberia and Bennett College in Greensboro, North Carolina. Another of Rev. Barrow's mottoes being "to keep on keeping on."

Always a trailblazer, she told me she started her career as the first black female union welder in our nation, and took a huge pay cut to leave her welding job to devote herself to civil rights and human rights for all.

A confidante of Rev. Dr. Martin Luther King, Jr., she co-founded Operation Breadbasket and at her death was Chair Emerita of the Rainbow PUSH Coalition, Co-Pastor at Vernon Park Church of God, and 2012 recipient of the Chicago Urban League's Edwin C. "Bill" Berry Civil Rights Award.

When Dr. King or Rosa Parks would come to Chicago, her ivory living room couch was a place to sleep, when nearby hotels turned them away, not for lack of space but because of their skin color.

In what would be her last Christmas in 2014, I asked my godmother how she came to meet Dr. King and Rosa Parks. Her answer, "In the streets, marching."

She liked to tell the story of how two decades before the Montgomery bus boycott, she single-handedly, as a young teen, integrated the public school buses in Burton, Texas. She parked herself in a seat and refused to move. A tactic that served her well in the years that followed.

Whether playing an instrumental role in organizing the Selma march to Montgomery, Alabama, or sitting across the table from corporations bargaining for justice for workers, just park yourself there, she said. Don't move. Look them straight in the eyes and never look away.

Her own eyes, so very large, brimming with so much compassion, that's the way I will remember her. And her voice. The voice for others. Rarely for herself. But always heard.

From 1 Corinthians 2:9, "Eye has not seen, ear has not heard what God has ready for those who love him" sums up her life, put to music by Marty Haugen in his rendition, "Eye Has not Seen."

On behalf of all your godchildren, here's to you dear godmother with all our love!