In a recent report, I showed that full revaluation of the yuan and other undervalued Asian currencies would improve the U.S. current account balance by up to $190.5 billion, increasing U.S. GDP by as much as $285.7 billion, adding up to 2.25 million U.S. jobs and reducing the federal budget deficit by up to $857 billion over 10 years. This change to the current account balance (the broadest measure of the U.S. trade balance) would also help workers in China and other Asian countries by reducing inflationary overheating and increasing workers' purchasing power.

However, a recent blog post by two researchers from the Federal Reserve Bank of New York argues that revaluation "would not make a meaningful near-term difference in the U.S. bilateral deficit with China." Their work ignores the much more significant impact that Chinese revaluation would have on U.S. exports to the rest of the world; and the likely impact a higher yuan will have on other currency manipulators such as Hong Kong, Taiwan, Singapore and Malaysia. Recent research has estimated that the yuan is undervalued by 28.5 percent against the U.S. dollar. China's currency manipulation acts like a subsidy of 28.5 percent on all of its exports, and a tax on U.S. exports to China and the rest of the world (since it lowers the cost of Chinese products relative to those made by U.S. firms).

The New York Fed researchers, Matthew Higgins and Thomas Klitgaard, examine the impacts of a stronger renminbi (RMB), the official currency of China, denominated in yuan, on the U.S.-China trade balance only, ignoring the impact that RMB manipulation has on U.S. trade with the rest of the world.

On the import side, Higgins and Klitgaard make two significant claims. First, they claim that a revaluation would have a less than proportionate impact on the cost and prices of Chinese exports (e.g., a 10 percent revaluation might only reduce Chinese profit margins by 5 percent). This claim, which is based on research that pegs the domestic content of Chinese exports at only about 50 percent, ignores the large share of China's imported components that come from other Asian countries, many of which are also currency manipulators.

According to recent Chinese data, 60 percent of China's imports come from other Asian countries, and much of the rest comes from oil exporting countries. If, as is likely, all currency manipulators follow China's lead and revalue, the dollar price of those imports will also increase, putting further upward pressure on the dollar price of Chinese exports.

But this framework fails to consider what would happen to spending on Chinese imports absent revaluation. Between 2001 and 2007 (prior to the Great Recession) U.S. imports from China increased 18.6 percent per year. Even in a very weak economy, imports through May 2011 increased 16.0 percent. If revaluation stabilized the level of Chinese imports, it would make a huge contribution to stabilizing the U.S. current account deficit. The U.S. goods trade deficit with China increased $68.5 billion in 2010, and was responsible, alone, for nearly three-quarters (72.6%) of the growth in the U.S. current account deficit.

They fail to note that China is our largest competitor in almost every export market around the world. In 2010, China was the world's largest exporter, as shown in the chart below. China's share of world exports nearly tripled between 2000 and 2010, rising from 3.9% to 10.5%, while the U.S. share declined nearly a third, from 12.3% to 8.5%. 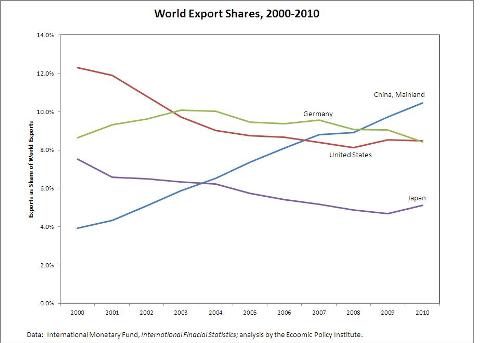 To create a more complete picture of the impact of revaluation on U.S. trade, I examined the impact of revaluation by China and other Asian currency manipulators on the U.S. current account balance with the world, using currency weights from the Board of Governors of the Federal Reserve, which are based on global trade flows. These weights reflect the fact that China is our most important competitor in third-country markets for exports. China's overall weight in the broad index of the foreign exchange value of the dollar was 19.871 percent in 2011. I examined the impact of a 28.5 percent revaluation of the RMB, which would reduce the relative value of the U.S. dollar by 5.66 percent. I also assumed that if China revalues, other Asian currency manipulators including Hong Kong, Taiwan, Singapore and Malaysia would also revalue by 28.5 percent. The weight of those four currencies in the broad dollar is 7.557 percent, and if they revalue by 28.5 percent, then the U.S. dollar would fall by an additional 2.16 percent, for a total decline of 7.82 percent.

To test my results, I used Higgins and Klitgaard's method to estimate the impacts of revaluation on total U.S. exports. They assume that a 1 percent decrease in the value of the dollar would increase U.S. exports by 1 percent (a price elasticity of demand for U.S. exports of 1). Based on year-to-date growth through May 2011, total U.S. goods exports in 2011 are on track $1.5 trillion. Using their conservative elasticity assumption yields a $120 billion increase in goods exports ($1.5 trillion times 7.82 percent). U.S. services exports will likely exceed $600 billion in 2011, and a 7.82 percent fall in the dollar would add an additional $48 billion in services exports, for a $168 billion increase in total goods and services exports. Since they assume revaluation would have no impact on the value of U.S. Imports from China, this translates into a $168 billion improvement in the trade balance. Higgins and Klitgaard also acknowledge that the response of trade to changes in the dollar could be twice as large (a price elasticity of 2) which could yield current account improvements in excess of $300 billion, but that figure seems improbably large, based on past experience.

In my study, I used a multiplier from William Cline of the Peterson Institute which yields slightly larger estimates of the impacts of changes in the value of the dollar on the U.S. current account. I estimated that a 28.5 percent revaluation by China and other Asian currency manipulators would improve the U.S. current account deficit by $190.5 billion. I then used standard macroeconomic models to estimate the impacts of this change on GDP, employment and the federal budget deficit. Thus, both methods yield similar estimates of the impact of revaluation on the U.S. global trade balance.

Clearly, revaluation by China and other Asian currency manipulators could help reduce the U.S. current account deficit, which increased $94.3 billion (25.1 percent) in 2010. Growing trade and current account deficits are a major drag on the economy. Growth of the goods and services trade deficit alone reduced real GDP growth by 0.49 percentage points in 2010. Higgins and Klitgaard erred in failing to consider the impact of revaluation of the Chinese yuan on U.S. global exports. When this mistake is corrected, the two models lead to the same, unmistakable conclusion that revaluation of the RMB would reduce or reverse the growth of the U.S. current account deficit, the broadest measure of our trade deficit.

Higgins and Klitgaard also argue that the U.S. trade deficit with China will shrink in the future without significant RMB revaluation, due to the rapid expansion of China's middle class and its demand for "higher-end goods and services." They also claim that the "current share of Chinese goods in overall U.S. non-oil spending... is already so high" that the rate of growth of Chinese imports must slow in the future.

Regarding Chinese imports, the U.S. retains a large manufacturing base, although manufacturing employment has fallen by about one-third in the past decade. Nearly 12 million workers are now directly employed in U.S. manufacturing, and millions more are employed in supporting industries like business services, law, accounting, engineering and scientific research. China's rapidly growing exports threaten U.S. exports to the rest of the world, and the remaining core of the U.S. industrial base. The U.S. trade deficit is likely to continue its rapid growth and these jobs will continue to be threatened unless and until China revalues.