As highlighted by President Obama in his final State of the Union address -- particularly following the inclusion of five climate and environment focused Sustainable Development Goals adopted at the U.N. in September, the agreement reached in Paris at the past year's COP21 conference and the recognition of 2015 clocking in as the hottest year on record -- the last climate deniers standing (most of them American) will soon be very lonely. Accepting this as fact, this reality of climate change begs another urgent question from the majority of us who do not dispute its obvious existence: how do we convince everyone to care enough to do something about it?

That's where the media comes in. And the answer is framing climate change and environmental protections as what they are -- human rights.

Just because the majority of the world's citizens recognize the legitimacy of climate change does not mean they are attune with the recommendations produced by the field's experts at COP21. As Sustainable Development Goal 17 (SDG 17) recognizes, it is partnership -- across global sectors -- that will ultimately achieve change. And while leaders across business, government and the non-profit world are making strides, the world needs everyone on board with why overfishing, accessibility to toilets, our ecosystems and clean energy matter -- and how they are all connected.

That these interconnected green elements -- as highlighted by the Sustainable Development Goals -- matter due to their adverse effects on human lives is already being clearly demonstrated and felt by us all, particularly by the world's most vulnerable populations:

Approximately 2.5 billion people -- one-third of the world's population -- still lack toilets, and one billion of them, mostly in rural areas, must resort to open defecation. While the relationship between access to toilets and gender-based violence is not causal, the former is certainly correlated to the latter in that poorly lit routes to isolated toilets that may not have proper locks make women much more vulnerable to predators. Furthermore, without proper sanitation facilities in schools, girls are faced with a major roadblock to managing their menstrual hygiene, resulting in both health problems like urinary tract infections and the tendency to miss school each month -- or drop out altogether.

We know that fossil fuels -- the world's primary energy source -- are incredibly detrimental to our planet, with the steady depletion of Earth's ozone layer. But it is also imperative to recognize a seemingly obvious reality of the burning of fossil fuels for energy, closer to ground: the buildup of ozone, particularly in urban areas, is drastically polluting the air people breathe. And killing them. The World Health Organization (WHO) has stated that outdoor air pollution was the cause of death for 3.7 million people in 2012 -- combined with indoor air pollution, WHO believes this to be the among the most detrimental threats to global health. The very lives of the world's population depend on the successful implementation of clean energy systems.

Coastal communities and Small Island Developing States (SIDS) are already feeling the very real effects of climate change, including rising sea levels and changes to precipitation and storm intensity. As Prime Minister of Antigua & Barbuda Gaston Browne reminds us, this is a matter of survival. Already, the word 'refugee' takes on new meaning as even a one meter sea level rise could mean over 100,000 residents of Antigua & Barbuda will be displaced. But worse yet, it is the populations to be put at the most immediate dire risk that had perhaps the least to do with the manmade phenomenon of climate change, in the first place: As Browne states,

"The fact is, Antigua & Barbuda and all of the countries of the Caribbean combined do not produce 0.01 percent of the harmful carbon emissions now polluting the atmosphere. Rather than being polluters, we are the victims of other people's pollution."

SDG 14 (Life Below Water) and Poverty

Economic disparities between rich and poor nations are exacerbated due to illegal overfishing, which is stripping fishermen in areas like coastal East Africa of resources to earn a fair wage and consequently fuelling poverty and piracy. All the while, our precious ocean ecosystems are depleted.

SDG 15 (Life on Land) and the Refugee Crisis

There are obvious connections between climate change's negative effects on land and its human inhabitants, such as wildfire. But there are more nuanced connections, as well, as explained by Dr. Saleemul Huq, Director of the International Centre for Climate Change Development:

"The refugee crisis unfolding right now across the Middle East and Europe has its roots in social unrest that was compounded by an unprecedented drought that struck the Syrian region from 2006 to 2011, a drought that cannot be explained without taking climate change into account."

U.N. Secretary General Ban Ki-moon has similarly recognized that the genocide in Darfur "began as an ecological crisis, arising at least in part from climate change." 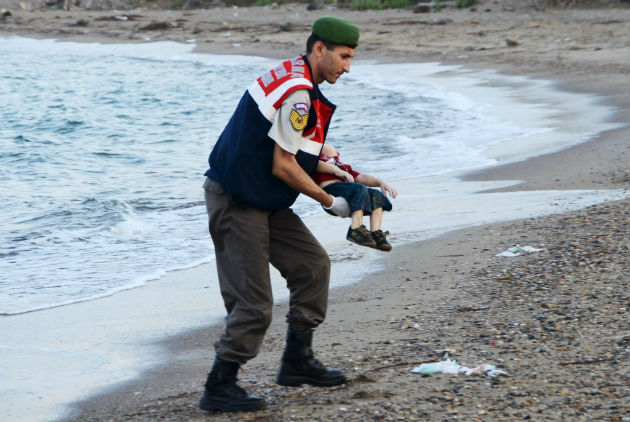 While it is true that the media has historically had difficulty portraying human rights to spur its readers into action, in 2015, the world sadly developed a new baseline: the photos of three-year-old Syrian Alan (Aylan) Kurdi -- who drowned on the shores of Turkey attempting to reach Greece -- jolted much of the world awake to the horrors of the refugee crisis they'd perhaps felt too disconnected from previously.

So I'm calling upon my colleagues in media and all of its consumers: let's take this moment to push back against the concepts of otherization, distant suffering and desensitization to mass atrocities that have previously disengaged us from doing something to fight for human rights. Let's make connections to spur people into action -- take clean and safe drinking water as a pertinent example. Many Americans might've taken this for granted, viewed this sanitation issue as a faraway plight -- until the Flint water crisis. Let's save our planet to save our people, because as Jamie Henn asserts, "the stakes couldn't be higher."

This post is a part of a series produced by The Huffington Post in partnership with the Friendship Ambassadors Foundation leading up to the 2016 Youth Assembly at the United Nations, a unique platform created to foster dialogue and generate partnerships between youth, private sector, civil society and the United Nations. The winter session will focus on the role of youth in the implementation of the 2030 Agenda for Sustainable Development. To see all posts in the series, click here.