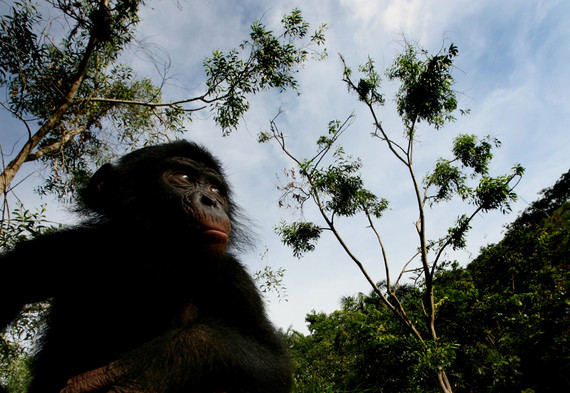 Bonobos are separated from chimpanzees by the River Congo, but they share more genes than we thought. Finbarr O'Reilly/Reuters

Between 1.5 and 2 million years ago, chimpanzees (Pan troglodytes) and bonobos (Pan paniscus) evolved from a common ancestor and formed clear physical and behavioural differences. Bonobos are smaller and more slender than chimpanzees. Socially, chimpanzees live in male-dominated groups, while bonobo society is female-dominated.

Until today, no one had considered the idea that these two separate species could exchange genes, largely because of a major physical barrier that separates chimpanzees and bonobos: the Congo River. Chimpanzees live on the northern side of the river, while bonobos live on the southern side.

It has even been suggested that the formation of the Congo River, which also happened between 1.5 million to 2 million years ago, might have been a major driver in causing the two species to differentiate from a common ancestor.

But, a our study reveals, there is evidence of ancient genetic mixing across species boundaries. We now know that hundreds of thousands of years ago, chimpanzees and bonobos were able to mate and produce offspring, leaving a genetic mark on the animals that live in the wild today.

We have observed from captive populations that it is still possible for the two apes to mate today, even after more than a million years as separate species. But only now has science been able to provide robust evidence of natural occurrences in the wild.

Based on 75 complete genomes of chimpanzees and bonobos, we found that central and eastern chimpanzees share significantly more genetic material with bonobos than other chimpanzee subspecies do. This leads us to believe that the gene mixing between bonobos and chimpanzees occurred during two different episodes - the first one, 500,000 years ago and the second one 200,000 years ago.

Our next step will be to explore whether the genetic material received from bonobos has had any selective advantage in the evolution of chimpanzees.

The genetic relationship between chimpanzees and bonobos shows striking parallels to the evolutionary history of modern humans.

Gene flow between diverging species has emerged as an important aspect in the evolution of species. Put simply, if we want to understand how species evolved and diverged from one another, we must understand how genes move between different lineages.

In the past ten years, leading research on the evolutionary past of modern humans, as well as our close, extinct relations - the Neanderthal and Denisovan - have shown the impact of interbreeding in our own evolutionary history.

Studies have also revealed in humans a number of introgressed Neanderthal genes - that is, genetic material from one species is integrated in the genome of another - which could affect our physical appearance, as well as our susceptibility to disease.

What this means for saving chimps

Sadly, many projections indicate that both chimpanzees and bonobos may go extinct this century. So it is more important than ever to for scientific collaboration to understand and protect these crucial species before they disappear.

Many chimpanzees fall victim to illegal trafficking each year. From our collective experience in chimpanzee and bonobo genetics, we can help guide global chimpanzee conservation efforts to fight this trade. Our newly generated dataset has allowed us to develop a genetic tool we can use to assign the geographical origin of chimpanzees confiscated by conservation authorities, and thus combat the illegal trade of chimpanzees.

But the full potential of these methods are limited by the resolution of the underlying sample of genetic data we have from both species, that is, how well we sampled each geographical area.

Despite our present efforts, there are still large knowledge gaps in unexplored regions of the distributional ranges of bonobos and chimpanzees. Our future efforts will be directed towards filling those gaps and thereby aiding the global conservation of our closest relatives.

This article was co-authored by Christina Hvilsom from the Copenhagen Zoo.