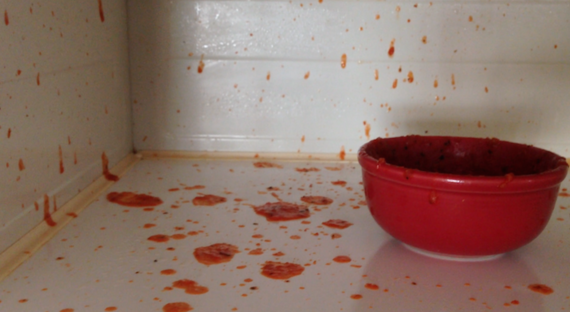 It's times like this I wish I had a much taller dog.

The reason water doesn't spit or explode can generally be answered two ways: water's molecules are basically uniform and during the heating process the molecules "bump" into one another in a fairly gentle (low friction) and predictable way. You see, water has a very low viscosity - meaning, it has a low resistance to its gradual deformation due to, in this case, heat. Think of it like this: water has a low viscosity -- it is "thin" -- while tomato sauce -- which is "thick" has a much higher viscosity. So: as the liquid molecules of H20 expand and become a gas as they are heated, they meet with very little molecular resistance on their path to escape the pot as steam.

Incidentally, I have a sign hung near my pool that also says: "No Spitting. No Explosions."

Tomato Sauce, on the other hand, explodes and spits when you heat it, as you'll see in this video.

So, why does tomato sauce explode in the microwave?

GELATINOUS: The first thing you need to know is the answer to this question: what are tomatoes made of? Tomatoes are mostly water, along with fructose, glucose, fiber, proteins and ash. Your store bought sauce will also likely contain various spices, citric acid and olive oil, among other ingredients. 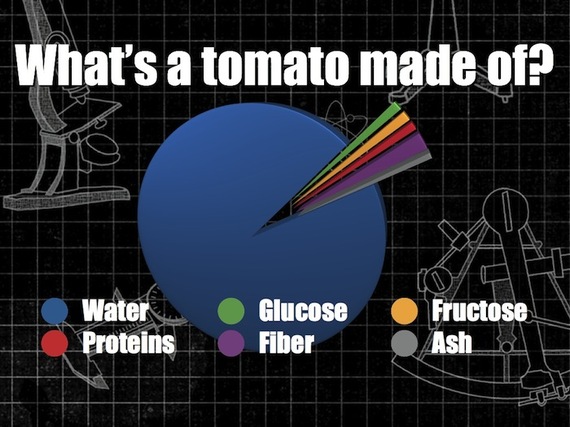 FYI: these are also the same ingredients Gary Busey is made of.

The next thing you need to know is the sauce's viscosity. You can see that it's higher than that of water -- and we'll get back to that in just a second. When the tomatoes are crushed to make sauce, what you get is a sort of stew -- a combination of a low viscosity liquid -- the water -- mixed with the fibrous insoluble cells that make up the rest of the tomato -- which have a higher viscosity. Under rapid heat -- as in the microwave -- the low viscosity water parts of our "tomato stew" turn to steam much more rapidly than do the insoluble fibrous chunks which become denser as the amount of water reduces and turns to steam. These insoluble fibrous tomato bits essentially block the steam's easy access out of the pot.

Much like Governor Christie's alleged ability to clog and block a highway and bridge -- the insoluable fibrous tomato chunks only block the steam's escape temporarily -- that is, until such point as the volume and strength of steam overpowers the chunks... and thus causing an "explosion."

Jon Hotchkiss is the creator of the new science series, This vs That. He hopes you'll check it out.